Delhi police commissioner urged them to return to work and said they should behave like a "disciplined force." 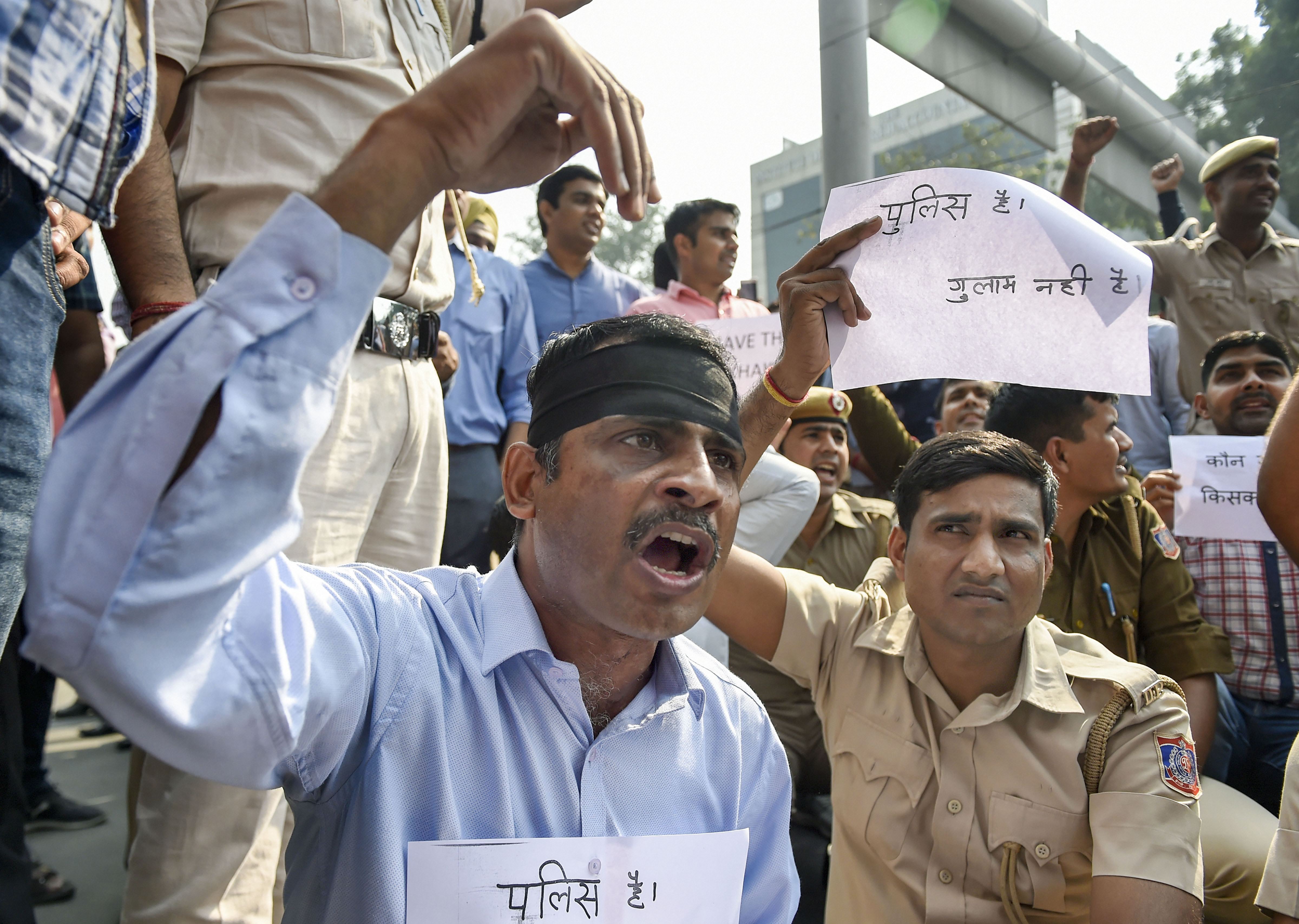 Thousands of police personnel staged a protest outside the police headquarters on Tuesday to demand action against those involved in an attack on their colleague outside the Saket court.

The tension between police personnel and lawyers had been building up since Saturday when a clash over a parking dispute led to at least 20 security personnel and several advocates being injured.

As surging crowds of protesters gathered outside the police headquarters in ITO, leading to traffic snarls, police Amulya

Patnaik came out of his office to assure them that their concerns will be addressed.

'We have to behave like a disciplined force. The government and the people expect us to uphold the law, it is our big responsibility. I urge you to resume duty,' Patnaik told the police personnel.

'The last few days have been testing for us. A judicial enquiry is underway and I request you to have faith in the process,' he told the gathering.

The entire top brass of the Delhi police tried to pacify the police personnel who were chanting slogans demanding justice and wore black bands. Delhi police has a strength of over 80,000 personnel.

Holding up placards with slogans such as 'We are human in police uniforms', 'We are not punching bags' and 'Protectors Need Protection', the police personnel urged their seniors to stand with them to save the honour of the uniform.

'Chief minister Arvind Kejriwal went to meet injured lawyers but did not meet our policemen who were also injured in the incident. Isn't it unfair to us,' asked a protestor.

'Traffic Movement is closed in the carriageway from ITO towards Laxmi Nagar. Motorist are advised to use Delhi Gate & Raj Ghat,' it tweeted.

The immediate provocation for the protest was an on-duty policeman being thrashed by advocates outside the Saket Court on Monday. A video of the incident, showing some men beating up a man in uniform on a bike, was circulated widely on social media.

When the policeman was leaving the spot, a man also hit his bike with his helmet.

The protesters also demanded action against the lawyer who assaulted the cop.

Union minister Kiren Rijiju shared the video on Twitter saying, 'Let's not take law into our hands. It's not question of supporting any group'.

Saturday's clash had led to many vehicles being vandalised or set on fire, according to officials.

The incidents drew sharp criticism from senior police officials who took to Twitter to register their discontent.

He was joined by former Delhi DCP Aslam Khan, now posted in Goa.

Khan posted the attack video with a caption, 'Khakhi going down to the worse'.

The IPS Association also condemned the attack and expressed solidarity with colleagues subjected to 'humiliation' and 'assault'.

'Incident involving police & lawyers unfortunate. All should take a balanced view of it based on facts in public domain. Countrywide, police stands in solidarity with those police personnel subjected to physical assault & humiliation. Condemn all attempts to break law, by anyone!,' the association tweeted from its official handle.