Advertisement
Home / India / The Nobel meme: Inspiration must be the cooking

The Nobel meme: Inspiration must be the cooking

When Banerjee won the Economics Nobel on Monday, a meme that drew much attention on social media was created by Ali 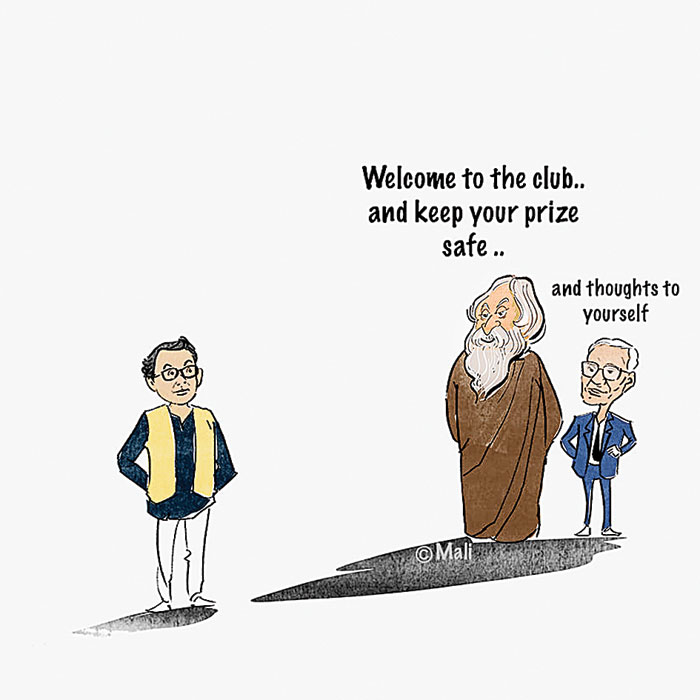 In the meme, Rabindranath Tagore and Amartya Sen welcome Banerjee to the Nobel club with sage advice: “Keep your prize safe… and thoughts to yourself”. Tagore offers the undeclared reminder of the medal theft from Santiniketan while the more contemporary coup de grace is delivered by Sen.
Debraj Mitra   |   Calcutta   |   Published 16.10.19, 11:44 PM

The economist and the landscape artist share a Nobel bond, too. When Banerjee won the Economics Nobel on Monday, a meme that drew much attention on social media was created by Ali.

In the meme, Rabindranath Tagore and Amartya Sen welcome Banerjee to the Nobel club with sage advice: “Keep your prize safe… and thoughts to yourself”. Tagore offers the undeclared reminder of the medal theft from Santiniketan while the more contemporary coup de grace is delivered by Sen.

Like Banerjee, Ali hails from Bengal but is based abroad now. Ali was cooking chicken in Australia on Monday when the idea flickered to life.

“I was elated about the Nobel Prize announcement and wondering what to do about it. I was cooking chicken when I saw a picture of Abhijit Banerjee clad in a blue kurta and yellow jacket on social media. I did a pencil sketch of him,” Ali, 32, told The Telegraph on Wednesday from his home in Newcastle, 160km north of Sydney.

Even before he had finished the sketch, the theft of Tagore’s Nobel came to his mind and then the frame. “Amartya Sen was a natural progression. I had read how Sen was defamed by a section of people for criticising the government,” said Ali who spent most of his childhood in Krishnagar in Nadia, where his father worked in the local court.

The landscape architect has been drawing cartoons since school and now has a Facebook page with over 31,000 followers, where he uploads topical memes every now and then. 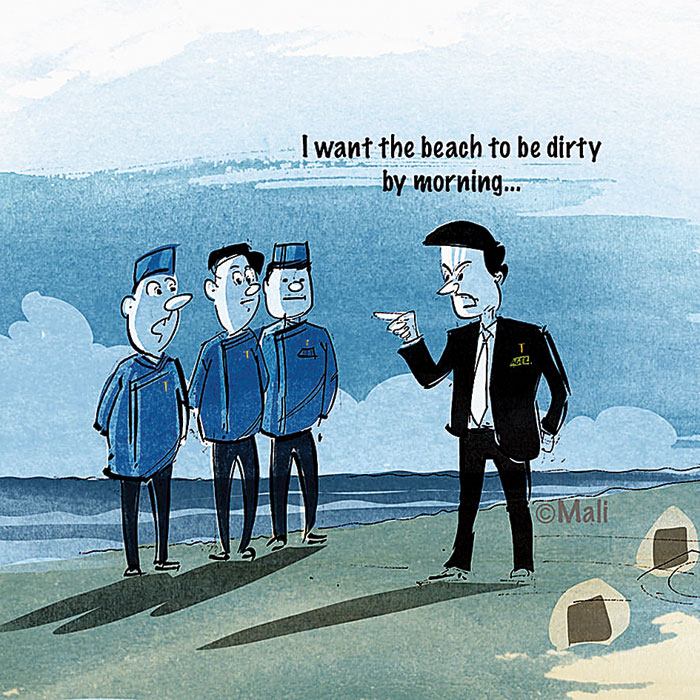 After scanning the pencil sketches, Ali coloured them digitally and uploaded the cartoon on his Facebook page. Since then, the meme has been shared over 3,900 times.

While his followers lavish praise on him for his wit and humour, Ali has also been trolled a lot for some of his previous works.

Ali had earlier uploaded another illustration where a man in a suit points a finger at three men — clad in identical uniform — on a beach. “I want the beach to be dirty by morning,” barks the man in the suit.

The caption read “somewhere before something” but did not name any person or place.

But many connected it to the Prime Minister’s plogging on the Mahabalipuram beach in Tamil Nadu last week.

One of the comments reads: “Don’t be so blind in your hatred. Any creative artist must be tolerant, otherwise he/she loses his/her right to criticise intolerance in others.” Some others were plainly abusive.

Cuss words and threats also came with another upload on October 11. It shows a fighter jet with lime and green chillies hanging from the cockpit. As a black cat crosses the path of the plane, there is a message from the cockpit: “Wait…. Let someone cross first.”

Ali said he also receives plenty of abusive messages and threats in his message box. While he answers some of the messages, he ignores most. His father, who still lives in Krishnagar, would earlier worry a lot about the online threats and ask him to desist from posting cartoons but has grown used to them now, Ali said. 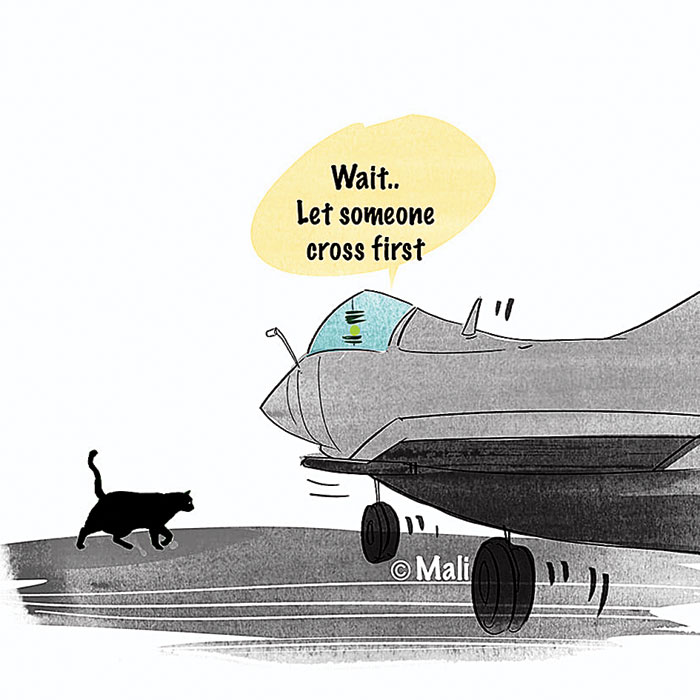 Ali’s cartoons are not always political. From remembering Malgudi Days and its creator R.K. Narayan to celebrating Ashtami with khichuri, his range of subjects is varied.

“I am neither Left nor Right. I am just interested in what is happening around me. None of my cartoons is obscene or vulgar,” he told this newspaper.

Ali is not sure if the “growing intolerance” is the result of a political propaganda. “At times, I think, people have always been like this. Social media just gives them the cloak of anonymity to attack someone.”

Ali never had formal training in painting but would draw cartoons of his teachers on the blackboard in their absence. He did the same while studying architecture at the Bengal Engineering and Science University in Shibpur (now IIEST).

He specialised in landscape architecture from the Centre for Environmental Planning and Technology (now university) and worked in Calcutta for a couple of years before moving to New Delhi. While spending six years at the capital, Ali would draw cartoons of his colleagues on their birthday cards.

He shifted to Australia two years ago and lives there with his wife.

In the meme, Sen advises Banerjee to keep his thoughts to himself. So far, Banerjee has not heeded the advice.

At the post-Nobel announcement media conference, Banerjee was forthright: “The Indian economy is going into a tailspin…. There is an enormous fight going on in India about which data is right and the government has a particular view… all data that is inconvenient to it is wrong… But, nonetheless… I think even the government is increasingly recognising that there is a problem.”

Ali is aware of a fresh wave of a troll attack on Banerjee. “He has started getting flak for speaking his mind. It is sad. But if things grow worse, I plan to do another cartoon,” Ali said.