Teen on hill for online class slips to death in Odisha 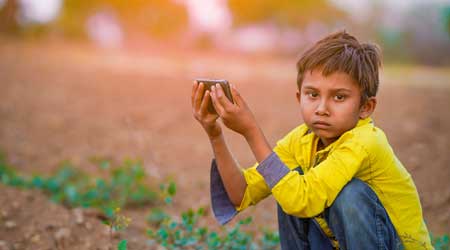 A 13-year-old tribal schoolboy in Odisha who had climbed onto a boulder atop a rain-soaked hill to be able to connect better to his online classes fell to his death on Tuesday.

Adria Jagaranga’s death in Rayagada district underlines the problem of poor Internet connectivity in rural areas that has helped create a digital divide among the country’s students and prompted educationists to appeal to the Centre to provide universal digital access.

Adria’s family said the boy had gone to the hilltop with three friends. The boulder he had climbed slipped and he fell more than 50ft with it, the stone crushing his right leg. He died on the way to hospital.

The boy was a Class VIII student at the Missionary High School in Cuttack. Schools have recently reopened in Odisha.

“He was to return to school on August 22, so he was desperate to complete his homework,” a relative said.

A fire brigade officer from nearby Padampur, Sushant Sethi, said heavy rain had made the hilltop slippery.

“We received a call from a resident to rescue the boy who had met with an accident,” he said.

“By the time we reached the spot, 25km from the fire station, the boy had been brought down from the hill on a cot by his family. He died on the way to hospital.”

Rabindranath Mohapatra, a local reporter, said Internet connectivity and mobile networks were poor in the area, forcing many students to climb to hilltops or treetops to attend their online classes.

The situation is similar across the country’s rural areas. This newspaper had last year reported how 25 male and female students in a Sambalpur village clambered atop a 150ft water tank every day to be able to connect to their classes.

He said chief minister Naveen Patnaik had taken the matter up with Prime Minister Narendra Modi.

However, the Centre appears to have passed the responsibility on to the states, although educationists say the Union government alone has the wherewithal to provide digital access to all students.

“Education is a subject in the concurrent list of the Constitution,” education minister Dharmendra Pradhan had told Parliament recently.

“Accordingly, the state governments have been directed to act based on the situation prevailing at every place to meet the demands of all students for providing them with the digital access required for learning digitally.”

Apart from poor connectivity, erratic power supply and the lack of quality devices too have left economically disadvantaged and rural students in the lurch.

Biju Dharamapalan, a teacher at M.G. University, Kottayam, had told this newspaper the Centre should “provide smart phones or TV sets with DTH connections to economically backward students”.

Ram Ramaswamy, an academic at the Indian Academy of Sciences, had said the Centre must ensure that “economically disadvantaged students get at least a free tablet and cheap data”.

Odisha minister Dash said: “Even though schools and colleges have reopened, the student turnout is only 60 to 70 per cent. Many parents are afraid to send their children to school. So, many of these students still depend on online classes.”