Advertisement
Home / India / Neither Amma nor Karuna, but ‘so many in the field’

Neither Amma nor Karuna, but ‘so many in the field’

The April 6 polls will be the first Assembly election in Tamil Nadu since the deaths of Karunanidhi and Jayalalithaa, whose rivalry had dominated state politics for nearly three decades 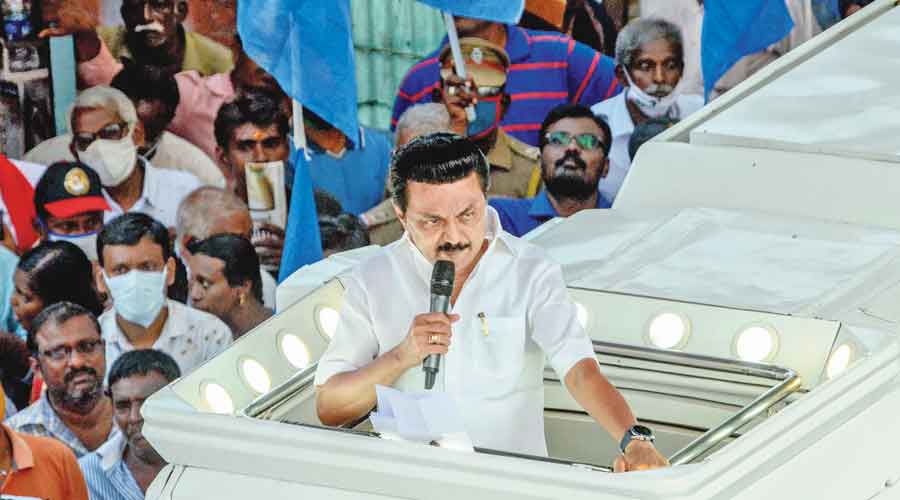 As the day temperatures soar, young Kalpana is sweating it out selling fruits piled up into a cone in an aluminium vessel along the highway just outside Chennai.

A graduate and a Dalit from a village near Panruti, 150km from Chennai, Kalpana commutes every day to sell guavas in the state capital’s sprawling suburbs. Her women’s self-help group forks out Rs 500 daily to have the fruits transported in a minivan, and at sundown Kalpana returns home with her day’s earnings.

“(Narendra) Modi and the BJP have no idea of Tamil Nadu realities,” Kalpana fumed on Sunday, castigating the “cultural imposition from the north” and underlining the lingering after-effects of the 2016 demonetisation that crushed the vast cash-based informal sector.

“I’m qualified and should not be doing this job now,” she said.

Kalpana always wanted a government job but, barring Covid-time fill-ins, the state administration has virtually frozen recruitments for the past four years.

Which is why she is angry not just with the Modi government but also with the AIADMK government of Edappadi K. Palaniswami.

Actor and Makkal Neethi Maiyam founder Kamal Haasan canvasses in Coimbatore. The entry of these small parties has made the race difficult to predict
PTI picture

Nearby, an elderly Mariamma was selling flowers. “For long years, we used to see only two symbols, of the DMK and the AIADMK. But now there are too many in the field,” she sighed, making her scepticism plain.

“As long as Jayalalithaa Amma was there, she would reach out to women and the poor like her predecessor M.G. Ramachandran. But we can’t say that now.”

After a pause, she added, “Nobody came to our rescue when the coronavirus broke out....”

“The prices of essentials, including petrol and diesel, have gone through the roof. But you can never tell what will happen as long as Modi is at the Centre,” Senthil, an auto-rickshaw driver in small town Kumbakonam, sounded uneasy.

The April 6 polls will be the first Assembly election in Tamil Nadu since the deaths of Karunanidhi and Jayalalithaa, whose rivalry had dominated state politics for nearly three decades.

Segments of the urban middle class, the core constituency of the AIADMK-BJP alliance, are unhappy too.

“Chief minister Palaniswami’s performance has exceeded expectations in the last two years, yet the AIADMK’s strike rate in its western bastion of the OBC Gounders (which accounts for 58 of the state’s 234 constituencies) will be less than 50 per cent this time,” said Sathish, an IT professional in Coimbatore. “The younger voters are looking up to Kamal Haasan.”

The three new farm laws will definitely go against the AIADMK for being “yoked to the BJP on all major policy matters”, said Perundurai Periyasamy, a CPI leader from the western “Kongu” belt.

Purushottaman, panchayat president at Thulasendhrapuram, the ancestral village of US Vice-President Kamala Harris in Tiruvarur district, cautioned against jumping to conclusions.

“It’s a tough, multi-party contest this time, and caste is not the only issue. The trend is in favour of the DMK-Congress alliance. But with competitive populism gripping both sides — the ruling party’s offer of free washing machines to housewives being the latest sop — the mood among the neutral voters can change,” he said over the phone.

V. Durai Manickkam, president of the CPI farmer body Tamil Nadu Vivasayigal Sangam, 60 of whose members participated in the farmers’ protests on Delhi’s borders for a week, slammed the “anti-people” farm laws.

Seeking to court the minorities, the AIADMK has in its poll manifesto done an about-turn and promised to press the Centre to repeal the Citizenship Amendment Act.

After much haggling, the BJP has been given 20 seats while ally PMK will be contesting 23, mostly in its northern stronghold.

The DMK has managed to keep its formidable 2019 Lok Sabha poll alliance intact with the Congress, CPI, CPM, the Vaiko-led MDMK, IUML and the VCL, led by Dalit MP Thol Thirumavalavan, among others. Stalin has presented a clear “vision document” for Tamil Nadu’s growth over the next 10 years.

Four more combinations make the contest six-cornered. Kamal Haasan, actor and founder-president of the Makkal Neethi Maiyam, spearheads an alliance with the All India Samathuva Makkal Katchi — led by fellow actors Sarath Kumar and Radhika — and the Indhiya Jananayaga Katchi of educationist Pachamuthu.

As Kamal Haasan takes on a BJP senior, Vanathi Sreenivasan, from Coimbatore South, he is aghast that both the DMK and the AIADMK have “hijacked” his party’s poll promise of a monthly cash assistance for housewives.

The Amma Makkal Munnetra Kazhagam, led by V.K. Sasikala’s nephew T.T.V. Dhinakaran and contesting from Kovilpatti in the south, leads a fourth front. Sasikala, recently freed from prison after serving a sentence for corruption, has tactically stepped aside from politics for the time being.

Dhinakaran has allied with the DMDK of actor Vijayakanth, who has quit the AIADMK-BJP alliance, and tied up with Asaduddin Owaisi’s AIMIM in three seats.