'Everything should be fair. We expect the authorities to strictly follow the due procedure under the law' 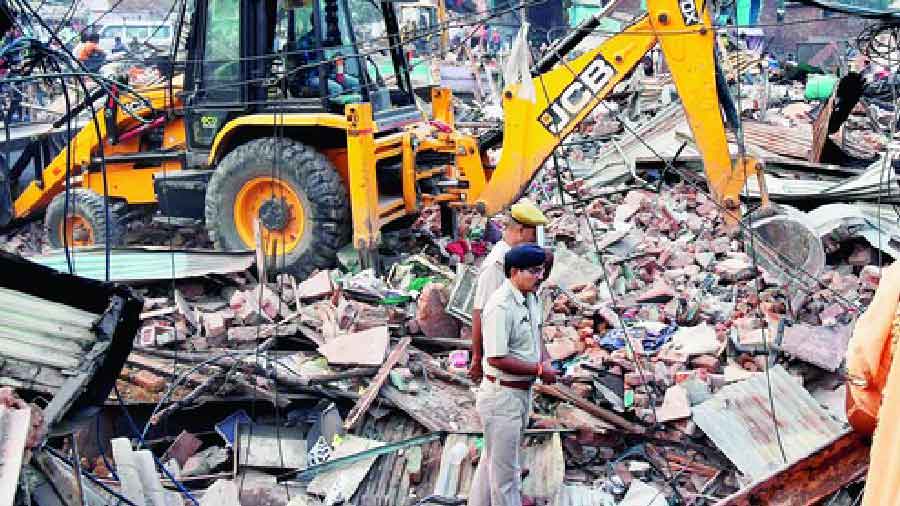 The Supreme Court on Thursday gave the Uttar Pradesh government and its authorities three days to respond to appeals alleging that houses of those accused in last week's violence were illegally demolished, adding that "everything should be fair" and authorities should strictly follow due procedure under the law. There must be a sense among the citizens that the rule of law prevails in the country, a vacation bench of Justices A S Bopanna and Vikram Nath said and urged the authorities to ensure nothing untoward happens until it hears the matter on June 21.

"Everything should be fair. We expect the authorities to strictly follow the due procedure under the law," it said.

The bench added, "How do we ensure their safety in the meantime? We have a duty towards them. We should ensure their safety in the meantime. Let us be clear, they (accused) are also part of society. Ultimately, when someone has some grievances, they should get a chance to address them. If this court does not come to their rescue, that would not be appropriate. Everything should look fair."

The bench clarified that it cannot stay the demolitions but can only say that such action should be strictly under the due process of law.

Justice Bopanna said, "We as judges are also part of the society. We also see what is happening. Sometimes, we also form our impressions."

The top court was hearing pleas filed by the Muslim body - Jamiat Ulama-i-Hind - seeking directions to the Uttar Pradesh government to ensure that no further demolitions of properties of alleged accused of recent violence are carried out in the State.

The Muslim body in its plea has said that no demolitions of properties be carried out without following due process and such exercise is done only after adequate notice.

Solicitor General Tushar Mehta, appearing for the Uttar Pradesh government, and senior advocate Harish Salve, representing the Kanpur and Prayagraj civic authorities, said the due process of law was followed and notice in one instance of demolition was given way back in August 2020.

Mehta said, "None of the affected parties are before the court and the Jamiat Ulama-i-Hind has approached the court seeking a generic order that there should not be any demolition."

Senior advocates C U Singh, Huzefa Ahmadi, and Nitya Ramakrishnan, appearing for the Jamiat Ulama-i-Hind, said statements are being made by the highest constitutional authorities, including the Uttar Pradesh chief minister, and demolitions are subsequently being carried out without giving an opportunity to the alleged riot accused to vacate their houses.

Singh said that on April 21, in a matter related to demolitions in the Jahangirpuri area here, this court had passed a status quo order and restrained the authorities from carrying out the demolition till further orders.

"Since the status quo order was only in connection with Jahangirpuri, the state authorities in Uttar Pradesh have acted and demolished properties of persons accused of rioting, protesting, and criminal activities. This action of demolition of houses of the alleged accused is appalling and has never been seen in this country even during the emergency period. More so members of a particular community are targeted," Singh said.

The bench asked Singh whether there were any prior proceedings pending before the demolition took place.

He added section 27 of the Uttar Pradesh Urban Town Planning Act says that at least 15 days' notice should be given before the demolition of properties so that the alleged encroachers can approach appellate authorities for remedy but in all of these cases, no notice has been given.

The bench said, "We are aware of the fact that demolitions cannot take place without notices."

Salve, who appeared for municipal authorities of Prayagraj and Kanpur, said that the petition points out three instances of demolition but in all the three cases prior notices were given much before the riots took place and in one of the instances it was given in August 2020.

"These properties are valuable, so these people are not those who could not approach the court," he said, adding that authorities be allowed to file an affidavit giving exact details of the three incidents within three days.

The Jamiat Ulama-i-Hind had earlier filed the plea on the issue of demolition of buildings in the Jahangirpuri area of the national capital.

The fresh applications in the pending petition said that after the last hearing in the matter some new developments have taken place that requires the attention of this Court.

"Some objectionable and offensive remarks were made by two political leaders a few days ago which led to communal tension in numerous parts of the country. Following the remarks of the two political leaders, a bandh was called for by a group of people in the district of Kanpur in protest."

"On the day of the protest, a scuffle broke out between the Hindu and Muslim religious communities, and stone-pelting took place between the two communities. After the violence in Kanpur, a number of persons in authority have stated in the media that the properties of suspects/accused would be confiscated and demolished. Even the Chief Minister of the state has said in the media that the houses of accused persons would be razed using bulldozers," one of the pleas said.

The plea alleged that the adoption of such extra-legal measures is clearly in violation of the principles of natural justice, especially when the apex court is hearing the present matter.