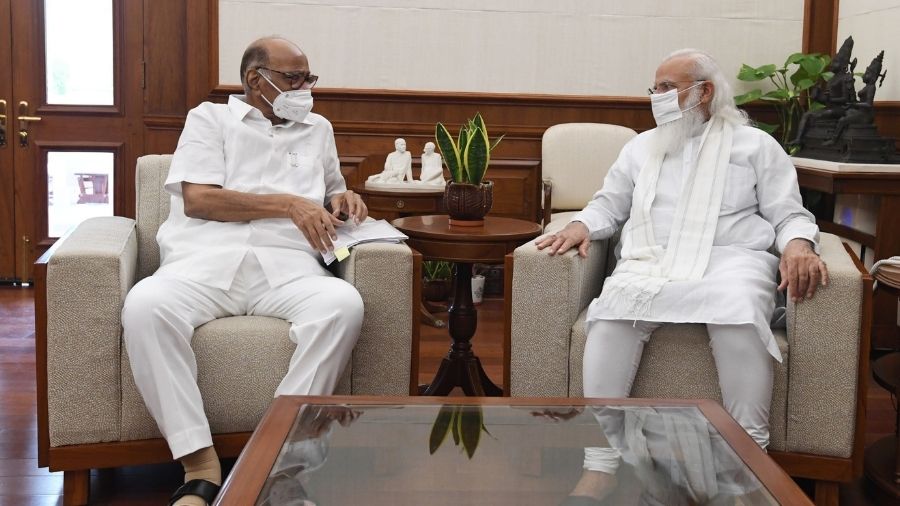 As the Enforcement Directorate stepped up heat on Shiv Sena leader Sanjay Raut, NCP supremo Sharad Pawar on Wednesday met Prime Minister Narendra Modi and told him injustice was being done against the senior Parliamentarian and editor.

Pawar met Modi at the Prime Minister's Office in Parliament along with NCP Lok Sabha member P P Mohammad Faizal, who raised issues related to his constituency Lakshadweep. Pawar said he flagged the issues of central agencies targeting Raut and the alleged inaction of Governor Bhagat Singh Koshiyari on the Maharashtra government proposal regarding nominations to the state Legislative Council.

"On what basis was action taken against Sanjay Raut? This is injustice. What was the provocation? Just because he is making some statements and criticisms does not mean action should be taken against him. What was the need," Pawar told reporters here.

"It is our duty to bring to the Prime Minister's notice the injustice being done to a journalist and a senior Parliamentarian," Pawar said.

On Tuesday, the Enforcement Directorate had attached assets worth more than Rs 11.15 crore of Raut's wife and two of his associates in a money-laundering investigation linked to certain land deals. Asked whether the central investigation agencies' action against leaders of the Maha Vikas Aghadi (MVA), the ruling coalition in the state, affected the stability of the Maharasthra government, Pawar exuded confidence that the government will complete its entire term.

"The MVA will also return to power in the elections in 2024," the NCP chief said. Hours before Pawar's meeting with the Prime Minister, the CBI took custody of former Maharashtra home minister and NCP leader Anil Deshmukh.

Deshmukh was taken into custody by the CBI team from the Arthur Road Prison in Central Mumbai and placed under arrest in connection with corruption allegations raised against him by former Mumbai police commissioner Param Bir Singh.

Pawar reiterated that he was not interested in the post of UPA chairperson as the largest party in the opposition was the natural choice to lead the opposition coalition. Pawar also sought to downplay Road Transport Minister Nitin Gadkari's presence at a dinner at his residence on Tuesday evening.

"I had invited MLAs from Maharashtra, who are in Delhi for a training workshop in Parliament, over dinner. Several of them had issues related to roads in their constituencies, so I requested Gadkari to come over to hear their grievances," the NCP chief said.

Earlier, asked by reporters about the meeting, NCP leadrv and Maharshtra's deputy CM Ajit Pawar said he had no information about it, so it would not be right for him to comment. But the country's prime minister and the national president of a party can meet over developmental works. There are some important issues which need to be discussed when Parliament is in session. There may be such issues, Ajit Pawar, who is the NCP chief's nephew, said. When pointed out that the meeting took place against the backdrop of central agencies intensifying action against leaders of the ruling Maha Vikas Aghadi (MVA) coalition in Maharashtra, Ajit Pawar said he did not know anything about it."