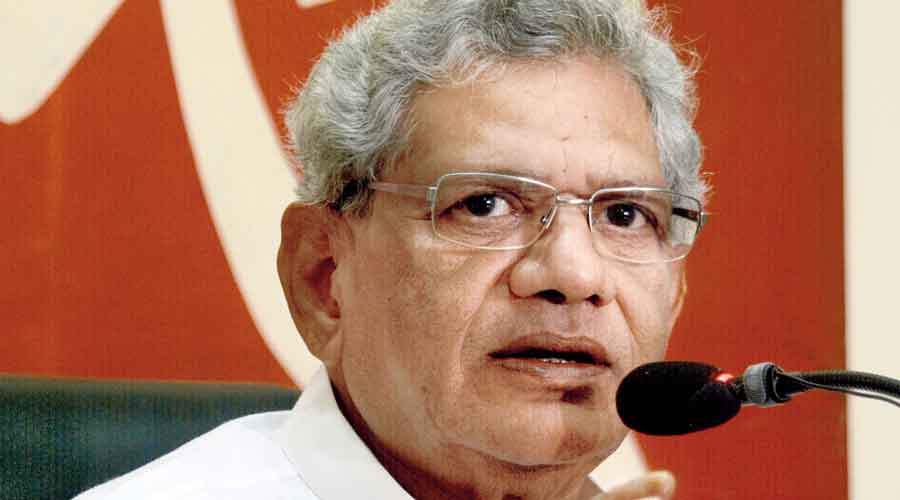 CPM general secretary Sitaram Yechury on Thursday urged secular forces to come together to oust the BJP-led government at the Centre and save the secular democratic republic. He also attacked the alleged overt and covert anti-people, pro-corporate, authoritarian and communal policies of the central government.

The CPM general secretary was speaking at the “Bharat Bachao Maharally” at the Gandhi Maidan in Patna that was attended by party workers and supporters from different parts of Bihar. The rally was part of a nationwide campaign from September 14 to 22 against Prime Minister Narendra Modi-led government.

Hailing the coming together of all secular and the Left forces in Bihar, Yechury asserted that it would become a model for the entire country in the fight against communalism and authoritarianism.

“All secular and democratic forces across the nation will come together to mobilise the people to oust the BJP regime in the 2024 general election. The historic Gandhi Maidan in Patna is a witness to the historical calls and slogans that galvanised the people’s movements. The JP movement’s slogan of ‘Sampoorna Kranti (Total Revolution)’ catalysed people’s resistance that eventually defeated the Emergency and restored democracy,” Yechury said.

Highlighting the anti-people economic policies of the government, the CPM general secretary said it granted a subsidy of Rs 80,000 crore to Vedanta-Foxconn semiconductor manufacturing plans in Gujarat, but was spending only Rs 72,000 crore under MNREGA (Mahatma Gandhi National Rural Employment Guarantee Act).

“This government has no plans to resolve the ever increasing inflation and unemployment problems. It could have increased public expenditure on the creation of basic infrastructure, thereby generating employment opportunities. At present, 42 per cent of our youth in the age group of 18 to 30 years have no work,” he added.

Yechury closed his speech by repeating “Bharat bachao, Modi bhagao (Save India, expel Modi)” five times and asked the people to make it their mantra.

Yechury had arrived in Patna on Wednesday and met chief minister Nitish Kumar and RJD chief Lalu Prasad to discuss the way forward for the Opposition unity in the country with regard to the 2024 Lok Sabha elections.

Talking to reporters after the meetings, he said that they were in furtherance to Nitish’s visit to CPM headquarters in Delhi to discuss the necessity of all like-minded political parties coming together to counter the BJP.

“The most important duty today is to save the Constitution, the country and its character of a secular democratic republic. For that we need to keep away the BJP from power and remove the Modi government,” Yechury told reporters.

Asked about who will lead a united Opposition, Yechury said that a leader would come at the opportune moment. He also gave examples of the circumstances in which H.D. Deve Gowda, Atal Bihari Vajpayee and Manmohan Singh became Prime Ministers.

Yechury added that he would not be able to speak about the name of such a coalition, but “secular forces will come together in all the states to contest the elections”.

The CPM general secretary also gave examples of how Tamil Nadu chief minister M.K. Stalin brought like-minded parties together and asserted that “it could be a model”.

Yechury avoided questions on the Congress and said that the prime question was the unity of Opposition instead of who will be the leader.