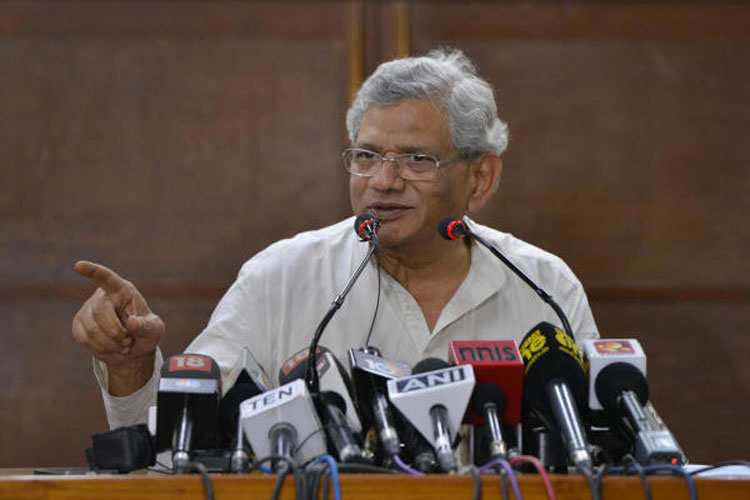 Sitaram Yechury, who had twice earlier tried to visit the Valley after the August 5 decision to scrap the special status of Jammu and Kashmir, was told by the Supreme Court that he had been granted permission only for the purpose of meeting Tarigami and for “no other purpose”.
Telegraph file picture
Muzaffar Raina   |   Srinagar   |   Published 29.08.19, 09:31 PM

CPM general secretary Sitaram Yechury on Thursday became the first Opposition leader to enter the Valley in nearly a month, armed with a Supreme Court order that only allowed him to visit ailing party colleague Mohammad Yousuf Tarigami to enquire about his welfare.

Yechury was taken in a seven-vehicle convoy to Tarigami’s house on Gupkar Road in Srinagar. Like several other pro-India politicians, the CPM state secretary is under house arrest.

Yechury refused to address the media at Srinagar airport and said he would speak on his return to Delhi. At Gupkar Road, journalists were stopped some three hundred metres away from Tarigami’s residence.

Concertina wires were erected on two ends of the road, an erstwhile power street that is also home to three former chief ministers — while Farooq Abdullah is under house arrest, Omar Abdullah and Mehbooba Mufti have been jailed.

Yechury, who had twice earlier tried to visit the Valley after the August 5 decision to scrap the special status of Jammu and Kashmir, was told by the Supreme Court that he had been granted permission only for the purpose of meeting Tarigami and for “no other purpose”. If he participated in any other activity, it would be seen as a violation of the order, he was warned.

Official sources said the CPM general secretary spent a few hours with Tarigami before he was taken to a guest house where he is to spend the night. A party activist said they wanted to meet Yechury but were not sure if they would be allowed.

While Yechury chose not to speak to media in the Valley, he hit out at governor Satya Pal Malik in Delhi before taking the flight to Srinagar. Malik had on Wednesday said people across the country would beat up Congress leader Rahul Gandhi with shoes for opposing the abrogation of special status for Jammu and Kashmir.

“The office of the governor is not supposed to be used for such comments. In a democracy, everybody has a right to have their opinion,” he told a news agency. “That’s their fundamental right and that is the right of their liberty. And if that is attacked in this manner by somebody who is occupying the office of a governor, that is something which is not acceptable.”