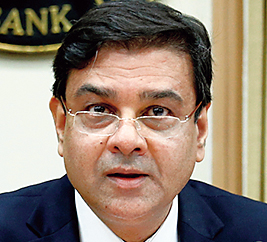 RBI governor Urjit Patel faces the prospect of receiving the maximum penalty under the Right to Information Act for dishonouring a Supreme Court judgment on disclosing the names of wilful loan defaulters.

The Central Information Commission (CIC) has issued a show-cause notice to the RBI governor for stonewalling the release of information of wilful defaulters who have reneged on loans of Rs 50 crore and more, PTI reported on Sunday.

The Supreme Court had upheld a decision taken by the then information commissioner, Shailesh Gandhi, calling for disclosure of names of wilful defaulters.

Irked by the RBI’s decision to dishonour the apex court’s verdict, the CIC has asked Patel to explain why the maximum penalty should not be imposed on him.

Information commissioner Sridhar Acharyulu rejected the arguments of Santosh Kumar Panigrahy of the RBI to justify the non-disclosure of the information. (See Page 4)

He said the RBI should “disclose the bad debt details of defaulters worth more than Rs 1,000 crore at the beginning, of Rs 500 crore or less at a later stage within five days and collect such information from the banks in due course to update their voluntary disclosures from time to time….”

The maximum penalty for obstructing disclosure of information could be “Rs 250 each day till application is received or information is furnished”. However, the total amount of such penalty cannot exceed Rs 25,000.

The amount may not be much but the notice comes in the middle of a rift between the RBI and the Centre. On Sunday evening, the RBI refused to comment before seeing the showcause notice.

The CIC has also asked the Prime Minister’s Office, the finance ministry and the apex bank to make public a letter of former RBI governor Raghuram Rajan on bad loans.

In April 2016, Rajan had told reporters that the RBI was ready to make public a list of wilful defaulters but was opposed to the idea of naming and shaming every case of loan default.

“We have no problem if the intent is to publish a wilful defaulters’ list…. That is where the promoter has, in the eyes of the bank, taken the bank for granted. The bank has gone through a legitimate process to declare the promoter a wilful defaulter. That can be made public. In fact, some courts have prevented the banks from making those lists public. If there is a judgment along those lines, we have no problem.

“But we believe that simply any act of default without understanding the severity of the issues involved, if it is just put out for public to consume, it may create both loss of business as well as undue anxiety and panic and therefore chill business activity,” Rajan had then said.

In March 2016, the RBI had submitted a list to the apex court in a sealed cover of the 150 top loan defaulters who owed banks more than Rs 500 crore.

“Our plea to the Supreme Court was ‘Please, keep this confidential.’ There are elements that can be disclosed but let us not disclose everything,” Rajan had said two years ago.