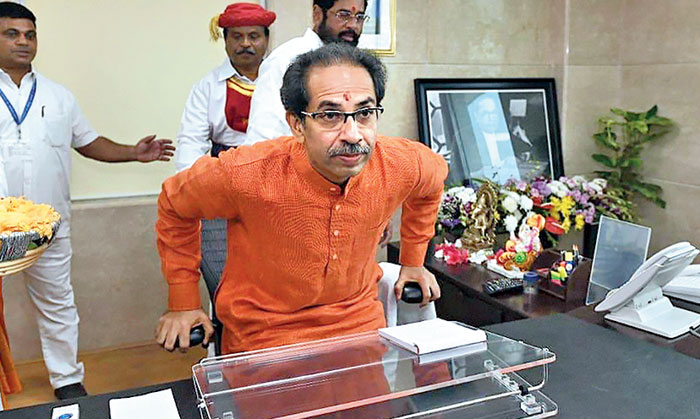 The Shiv Sena on Friday decided to review projects cleared by the erstwhile Devendra Fadnavis government and threatened to destabilise the Goa government helmed by the BJP.

He ordered an immediate halt to the work on the Aarey car shed project, a controversial scheme cleared by Fadnavis for which over 2,000 trees were cut despite intense public protests.

Uddhav himself announced a review of the project. “I have stayed the Aarey car shed work. I will review the entire thing.… I won’t allow a culture where trees are cut at night,” he said.

“Not a single tree leaf will be cut till further orders,” he added, clarifying the Metro project itself had not been stayed.

The Sena had set the tone early in the morning with an editorial in its mouthpiece Saamana declaring Maharashtra would not tolerate injustice.

Contending the change in Maharashtra was not about power but about a movement that would guide national politics, the editorial reminded the BJP that the Prime Minister belonged to the country and not a party. The suggestion was that his responsibility towards the state cannot be guided by political biases.

Although the editorial’s description of Uddhav as Narendra Modi’s younger brother was viewed as a conciliatory gesture by some, the tenor suggested a warning against any discrimination for political reasons.

It also asserted the “bhagwa” (saffron flag) had been hoisted on the government office and that “those antagonistic towards the bhagwa stand to lose”. This was also a message to the BJP not to needle the Sena on the ideological front.

The most acerbic taunt came from Sena leader Sanjay Raut, who said: “After Maharashtra, a miracle will be seen in Goa soon.”

“It will happen across the country. After Maharashtra, it is Goa; then we will go to other states. We want to build a non-BJP political front in this country,” Raut said.

The BJP, which formed the Goa government in 2017 despite winning only 13 of the 40 Assembly seats, is placed comfortably in the state at present. The Congress, which won 17, just four short of majority, was outwitted with the smaller parties and Independents backing the BJP. Then followed a spate of defections from the Congress and victories in by-elections, pushing the BJP’s tally to 27.

Sardesai was removed as deputy chief minister last July after 10 Congress MLAs defected to the BJP. The Congress’s tally has now fallen to five.

The Sena’s threat looks unrealistic at this stage but there is no denying that the Goa government acquired its stability piggybacking on defectors whose political loyalties remain suspect.

What is significant, however, is the antagonistic public posturing by the Sena against the BJP. The ruling coalition, known as the Maharashtra Vikas Aghadi, has decided to seek the trust vote on Saturday and NCP leader Dilip Walse Patil has been appointed the pro-tem Speaker.

The cabinet has to be expanded next week but the Congress has not yet been able to finalise the contours of the deal.

The Congress, sources said, now does not want the Speaker’s post and is instead lobbying for the second deputy chief minister. The NCP, too, is in a dilemma about the role of Ajit Pawar. But Uddhav is keen to set up the entire ministry at the earliest and start working sooner than later.