Shinde rewarded with CM post; Fadnavis his deputy after initially saying no

Sharad Pawar takes dig at BJP leader, says he does not seem to be happy taking over as deputy CM 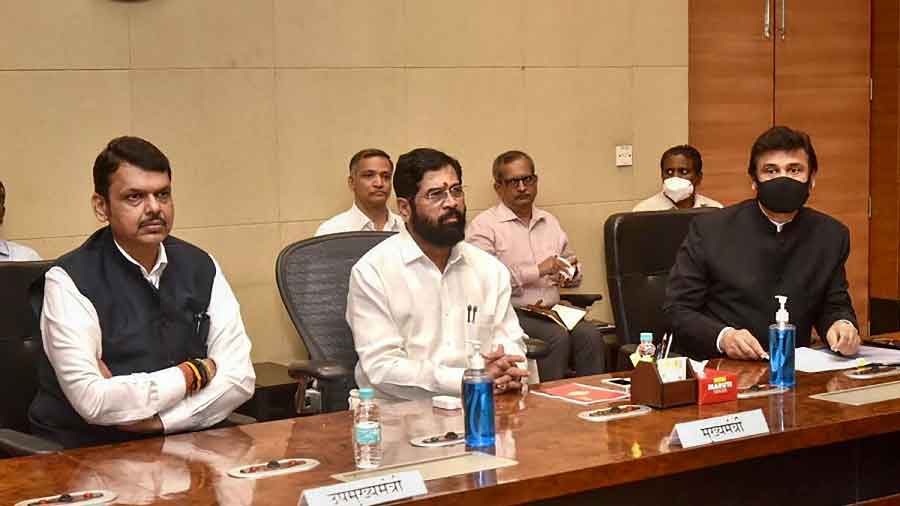 Rebel Shiv Sena leader Eknath Shinde was on Thursday sworn in as the 20th chief minister of Maharashtra, while BJP stalwart Devendra Fadnavis took oath as the deputy CM, capping a day of surprises and bringing a dramatic end to the ten-day-old political crisis in the state.

Widely seen as the next chief minister after the collapse of the Shiv Sena-led Maha Vikas Aghadi (MVA) government on Wednesday, Fadnavis sprang a huge surprise when he announced that Shinde will occupy the top post and that he will not be part of his dispensation.

Minutes later, BJP president JP Nadda said in New Delhi that Fadnavis, a former CM, will be part of the Cabinet led by Shinde, whose rebellion against the Shiv Sena leadership brought down the two-and-a-half-year old MVA government.

"Devendra Fadnavis has shown big heart and decided to join the new Maharashtra cabinet," Nadda tweeted. Union Home Minister Amit Shah also said in a tweet that Fadnavis, who hails from Nagpur, has decided to join Maharashtra government on the request of Nadda and in the interest of the state.

As the dust settled, the focus shifted to the Raj Bhavan in south Mumbai where Governor Bhagat Singh Koshyari administered the oath of office to Shinde (58) and his deputy Fadnavis (51) shortly after 7.30 pm.

"Development of the state is my priority. I will take all sections of society along with me," Shinde said after the ceremony.

The new CM was accompanied by his family members to the inauguration. However, his son Shrikant Shinde, the Lok Sabha MP from Kalyan in Thane district, is staying with the rebel Shiv Sena MLAs in Goa, where they had arrived from Guwahati on Wednesday night, nine days after the rebellion that pulled down the MVA government.

A two-day special session of the Maharashtra legislature will be held from July 2.

The decision was taken in the first cabinet meeting after Shinde took over as the new chief minister, officials said.

On the first day, election to the post of Assembly speaker will be held, they added. The swearing-in ceremony took place a day after Sena president Uddhav Thackeray, deserted by most of his party MLAs, including ministers, resigned as CM after deciding not to face a floor test in the Assembly ordered by the Governor on Thursday.

The crisis in the MVA governemnt began on June 21 when Shinde walked away with a bunch of MLAs whose number later swelled to 39 and camped first at Surat and then at Guwahati.

"Shinde always took care of his supporters and party workers. For the first time, a legislator from Thane district has become the chief minister. We are delighted for this decision," said a supporter.

The Sena leader, hailing originally from a village in Satara district in western Maharashtra, is the MLA from Kopri-Pachpakhadi in Thane city.

Some Shinde supporters took out a motorbike rally in Thane and shouted slogans hailing their leader, who is known as a mass leader, often mingling with his voters and hearing their grievances besides holding regular meetings with local Sena workers and functionaries.

Taking a dig at Fadnavis, NCP president Sharad Pawar said in Pune that the BJP leader does not seem to be happy taking over as deputy CM.

"According to me, it does not seem that Fadnavis has accepted the number 2 position ( deputy chief minister) happily. His facial expression said all. He is from Nagpur and he has worked as a swayamsevak with (RSS) and there when the order comes, it has to be followed," he said.

Pawar rejected suggestions that the Shiv Sena's tie-up with the Congress and the NCP, in 2019 for formation of the MVA government, was the reason for the rebellion in the Uddhav Thackeray-led party.

Shinde arrived in Mumbai from Goa in the afternoon and met Fadnavis at the latter's official residence in South Mumbai to discuss formation of the next government in Maharashtra.

Shinde, who was camping in a Guwahati hotel along with rebel MLAs for more than a week after the rebellion, landed in Goa on Wednesday night.

Shinde and Fadnavis held a brief meeting at the latter's residence before heading to the Raj Bhavan along with several BJP leaders.

The Mumbai police had made heavy security arrangements in view of Shinde's arrival in Mumbai.

Roads were emptied so that Shinde's cavalcade faces no hindrance while going to 'Sagar', the official bungalow of Fadnavis located at Malabar Hill.

Some Shiv Sena workers, who tried to hold a protest outside 'Sagar', were detained, they added.

Earlier in the day, Shiv Sena leader Sanjay Raut said rebel MLAs have chosen their own way and there would be no hindrance from the party in the path of the dissidents associating themselves with the BJP as he once again targeted the breakaway group.

He also tweeted an image of a man in a white kurta pyjama, who is presumably dressed like Uddhav Thackeray, with blood oozing from a wound on his back. This is exactly what happened, Raut tweeted, alluding to the dissidents who switched sides.

Raut said the Sena, which headed the MVA government, will play the role of a constructive opposition to the new dispensation.

Talking to reporters, Raut said the dissident leaders will "regret" their decision to part ways with the Shiv Sena.

It was a courtesy call as they had worked with Thackeray as part of the MVA government for the last two-and-half years, said Congress leader Nitin Raut.

As to whether the MVA, an alliance of Sena, Congress and NCP, would continue, he said the issue was yet to be discussed. State Congress president Nana Patole said the party would contest the coming local body polls on its own, while the decision as to whether to continue the alliance for Assembly and Lok Sabha polls would be taken by the party leadership.

Fadnavis as Number 2: Twist in the tale