Union home minister in Tamil Nadu to inaugurate and lay foundation of projects worth over Rs 67,000 cr 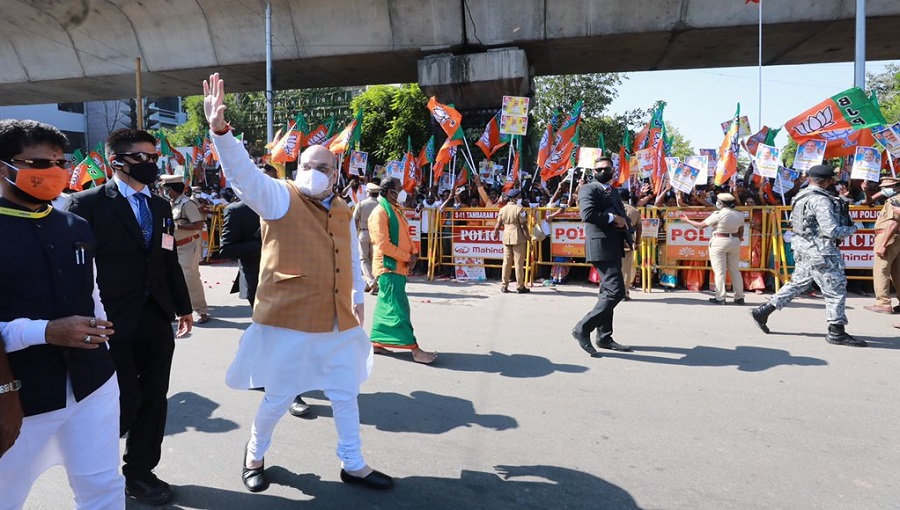 Union Home Minister Amit Shah on Saturday sprang a surprise in Chennai when he virtually broke protocol to get out of his vehicle and walk on the busy GST Road outside the airport to greet supporters, minutes after he landed here for a two-day visit of the city.

Shah, who thanked the metropolis for its love, said it was "great" to be in Tamil Nadu.

Shah is scheduled to attend a Tamil Nadu government event later in the day, where he will inaugurate and lay the foundation stone for projects worth over Rs 67,000 crore, including phase II of Chennai Metro Rail.

Soon after he arrived from Delhi, Shah was received by Tamil Nadu Chief Minister K Palaniswami, his deputy O Panneerselvam, senior cabinet members and BJP State President L Murugan among others, before proceeding to a city hotel.

It is always great to be in Tamil Nadu. Thank you Chennai for this love and support. https://t.co/pxl5EaZ6on

However, after exiting the airport, Shah's car suddenly stopped and the BJP veteran got out started walking, waving at scores of BJP and AIADMK workers who had gathered to receive him with their respective party flags.

Accompanied by BJP National General Secretary and party in-charge of poll-bound Tamil Nadu, CT Ravi, and Murugan, the Home Minister warmly waved at the overjoyed supporters who had thronged the airport since the morning.

A heavy security cover has been provided in the city following Shah's visit, during which he will meet state BJP functionaries and possibly discuss Tamil Nadu elections, due next April-May, before leaving on Sunday morning.

Meanwhile, Shah took to Twitter to thank the city for its love and support.

"It is always great to be in Tamil Nadu. Thank you Chennai for this love and support," he said in a tweet accompanying a video clip of his walk on GST Road.

Shah had earlier been here in August 2019 to release a book on Vice President M Venkaiah Naidu's two years in office then.

The attack on DMK 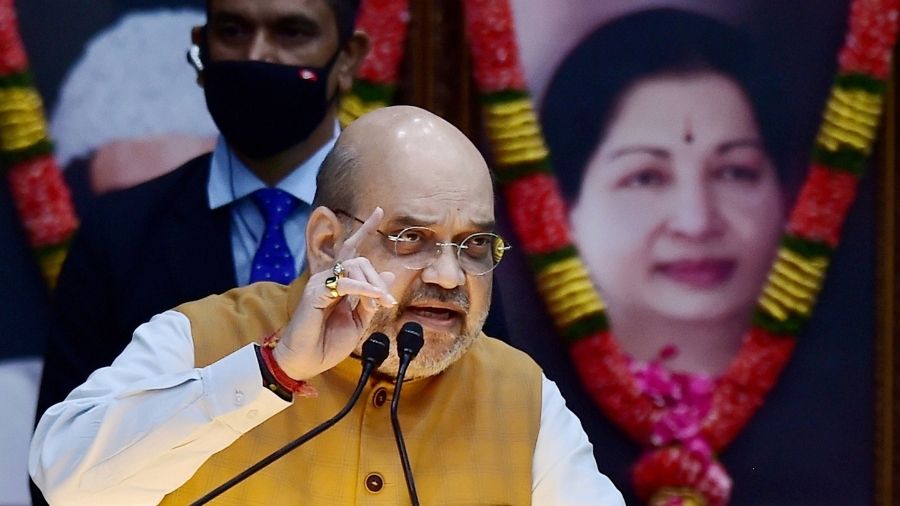 Amit Shah speaks during his address at Chennai on Saturday.
PTI

In a sharp criticism of the DMK and its ally, the Congress, Shah said that the two parties must not talk about corruption, asking "under whose leadership did the 2G (spectrum allocation scam) happen."

Dedicating a fifth reservoir for the supply of drinking water in Chennai and laying the foundation stone for multiple infrastructure projects in Tamil Nadu, Shah said Prime Minister Narendra Modi has started a war against dynasty politics, casteism and corruption in India.

"Under his leadership when we fought state polls, dynasty parties had to face defeat,” Shah said in his address.

“It is now the turn of a dynasty party in Tamil Nadu, which doesn't function on democratic values but only takes forward dynasty politics to lose elections,” he said in an apparent reference to the DMK.

The party has often faced criticism for practising dynasty politics from several parties, including its arch rival AIADMK.

"But I am sure such forces will come to an end in this election and democratic forces will progress," Shah said.

"I am very surprised when friends from DMK and Congress speak of corruption. Under whose leadership did 2G happen, where corruption to the tune of lakhs of crores of rupees happened? What right have they got to speak about corruption? Before making charges of corruption, see what had happened in your family," the minister said.

The Assembly elections in Tamil Nadu are scheduled in April-May 2021, where the AIADMK has declared its continued alliance with the BJP.