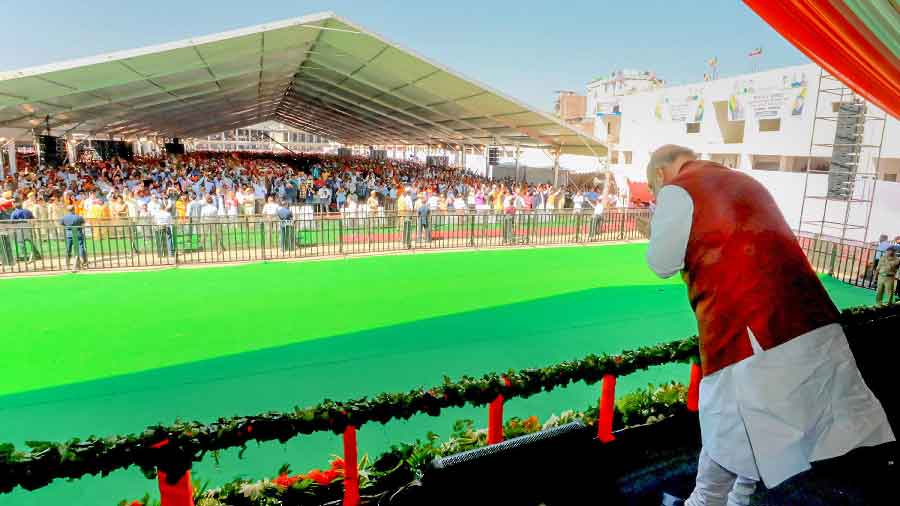 Amit Shah at a public rally for the inauguration and foundation laying of various projects related to health and education in Rajouri district
PTI Picture
Muzaffar Raina   |   Srinagar   |   Published 05.10.22, 01:34 AM

For the first time in the country, many upper caste members will be designated as Scheduled Tribes and earn reservation benefits.

Union home minister Amit Shah on Tuesday said the Paharis of Jammu and Kashmir would get ST status like the Gujjars and Bakerwals.

The Paharis are a linguistic group that includes both Muslims and Hindus. Many Hindu Paharis are Brahmins or Rajputs while the Muslim Paharis include the high-ranking Syeds and the descendants of upper caste Hindu converts. The Gujjars of Jammu and Kashmir are entirely Muslim.

Shah, who is in Jammu and Kashmir on a three-day visit, made the announcement before a massive gathering, mostly of Gujjars, Bakerwals and Paharis, in Jammu's Rajouri district.

The BJP is trying to woo the Paharis since the support of Hindus, who make up only about a quarter of Jammu and Kashmir's population, cannot by itself bring the party to power.

The BJP is also banking on the Gujjars, who are, however, deeply angered by the announcement of ST status for Paharis. The Gujjars, granted the ST tag in 1991, fear the Paharis would eat into their share of jobs and Assembly seats.

Shah tried to allay their fears, saying ST status for the Paharis would not hurt the interests of the Gujjars and the Bakerwals.

For the Paharis to get ST status, the Centre has to get the reservation law amended in Parliament.

"The Justice G.D. Sharma Commission has recommended reservation for Paharis. It will be granted after the completion of administrative formalities," Shah said.

He claimed such reservation had become possible only because of the scrapping of Jammu and Kashmir's special status in 2019. "Now, the minorities, Dalits, tribals and Paharis here will get their rights," he said.

He alleged that some people had tried to "instigate" Gujjars and Bakerwals, but "the people saw through their designs".

On Wednesday, the home minister is scheduled to address a rally in Baramulla where Paharis are expected to be present in large numbers.

In Rajouri, Shah targeted the families that had traditionally "ruled" Jammu and Kashmir, alluding to the Abdullahs and Muftis.

"Power is now with the 30,000 people elected to the panchayats and district councils through fair elections," he said.

"Earlier, all the money sent by the Centre for development was usurped by a few, but now everything is spent on welfare."

Over the past few days, the heavily anticipated ST status for Paharis had led to tensions between them and Gujjars in the Pir Panchal region of Jammu and Kashmir.

On Monday, Gujjars and Bakerwals held demonstrations in Jammu as well as at Shopian in Kashmir.

Shah met a Gujjar delegation on Monday night and assured it that the community's interests would not be hurt.

"Thank you very much for giving patience (sic) hearing to the delegation of Gujjar Bakarwal Community of J&K," Gujjar activist Guftar Choudhary, who was part of the delegation, tweeted, implying a patch-up.