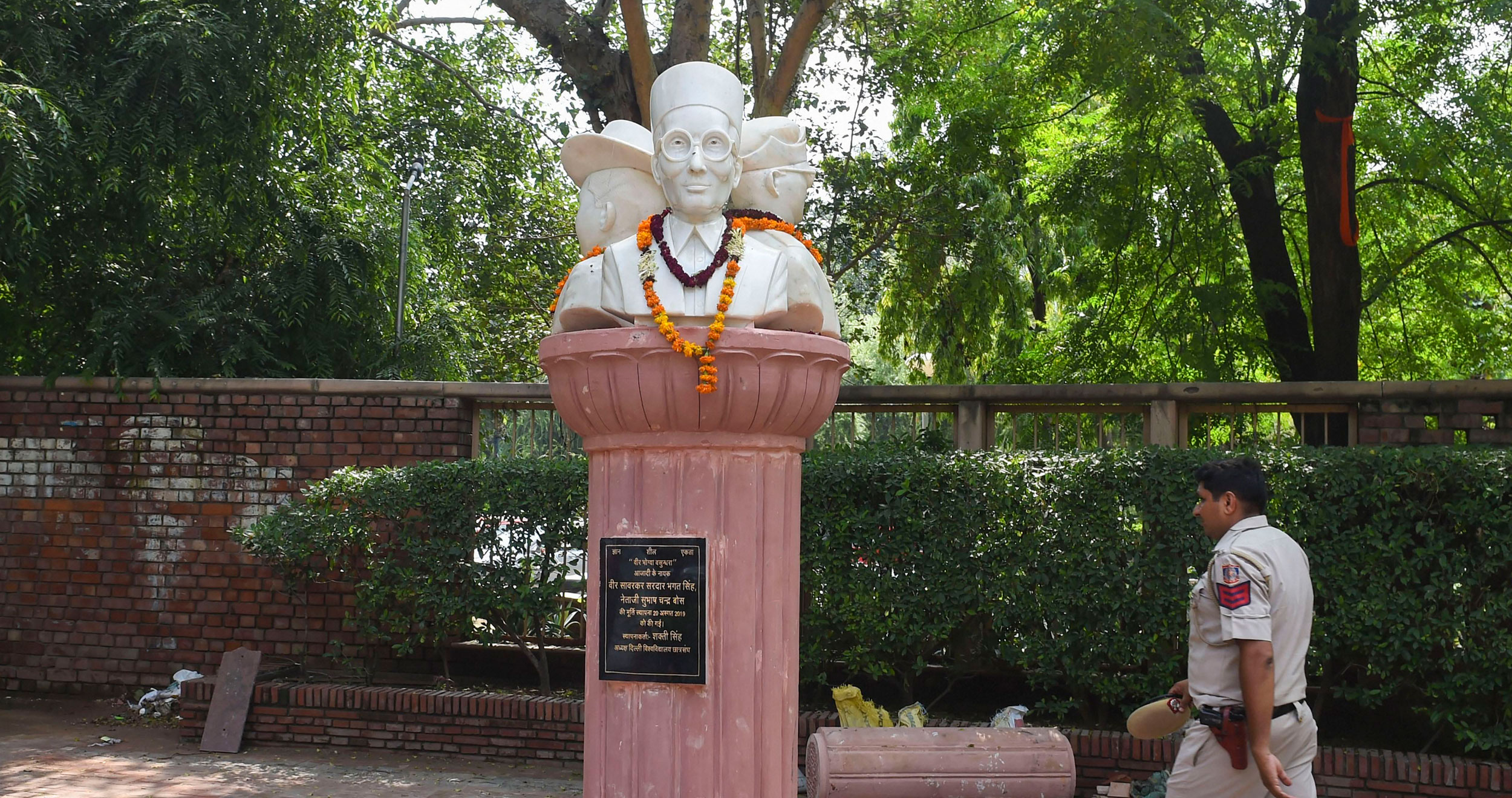 A policeman walks past the busts of Veer Savarkar, Subhash Chandra Bose and Bhagat Singh installed outside the Arts Faculty of Delhi University, in New Delhi, on August 21, 2019.
(PTI)
Our Special Correspondent   |   New Delhi   |   Published 22.08.19, 08:44 PM

A leader of the Congress’s student wing garlanded a bust of Hindutva ideologue Vinayak Savarkar, newly installed on the Delhi University campus, with footwear and blackened his face early on Thursday before activists from a rival camp could stop him.

“I was forced to do this as the university administration is simply watching the show while the statue of a police informer and a traitor was put up,” he said in a statement.

Savarkar had spent 14 years in prison for abetting the murder of a British official, a period when he wrote three mercy petitions pledging to help the government.

He had also opposed the Quit India movement and asked Hindus to join the armed forces to learn the “arts of war”.

Savarkar’s bust was installed outside the Arts Faculty early on Tuesday by a member of the ABVP, the RSS’s student wing.

The ABVP had, however, distanced itself from the act that came after the varsity administration did not respond to the student union’s demand to install the statues.

DUSU secretary Aakash Choudhary of the NSUI had complained against the post-midnight installation of the busts and the varsity has sent a showcause notice to Singh.

Singh’s supporters have been guarding Savarkar’s busts round the clock but could not stop Lakra and his supporters on Thursday.

Lakra and his supporters first garlanded the white-marble busts of Bhagat Singh and Bose with flowers, before garlanding Savarkar’s bust with slippers and smearing black ink on it as NSUI activists scuffled with Shakti Singh’s supporters and university guards.

Lakra later complained to police that he had received threat calls from 11 numbers from people who introduced themselves as supporters of the ABVP and the RSS.

Shakti Singh took to Facebook to slam the Congress. “In 1970, PM Indira Gandhi called Savarkar a revolutionary and a postage stamp of him was issued.

“In 2003, his portrait was put up in Parliament’s Central Hall, without opposition… Like it has blotted out history in the past, Congress workers blackened Savarkar’s statue at night.”

He added: “Congressmen and communists defend the portrait of (Pakistan’s founder M.A.) Jinnah (at Aligarh Muslim University since pre-Independence days), but can’t we put up revolutionary Savarkar’s statue.”

He said in another post: “If statues are blackened, other statues will also be targeted. Savarkar’s is not the only statue in the country. You have started it, we will take it to its conclusion.”

Singh has complained to the police against Lakra.

Savarkar is credited with coining the term “Hindutva”.