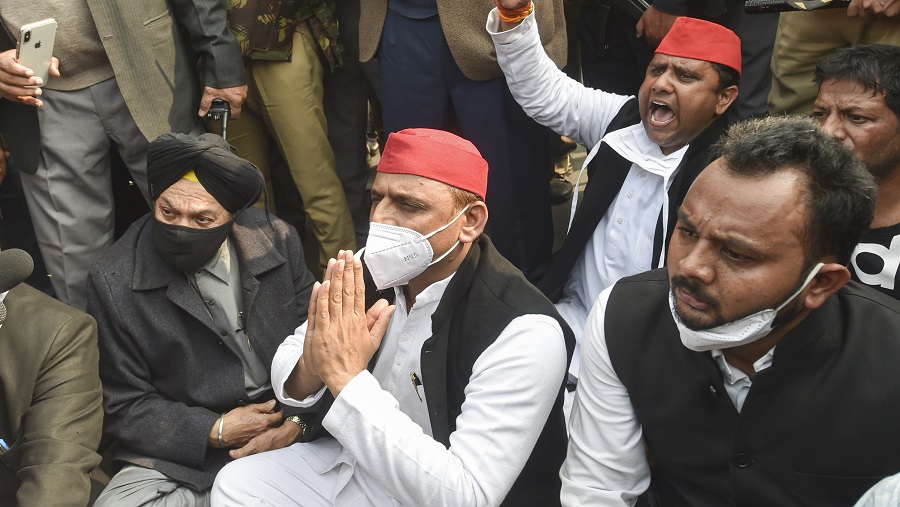 The Samajwadi Party has demanded the sacking of UP Minister Anand Swaroop Shukla for making controversial remarks against SP chief Akhilesh Yadav. The SP also demanded that a case be registered against Shukla for "insulting" Yadav and for "spreading animosity" in the society.

Uttar Pradesh minister of state for Parliamentary Affairs Shukla had accused Yadav of getting economic support from the ISI the Pakistan spy agency. On Friday, SP workers staged a protest at the District Collectorate building to demand the registration of a case against the minister.

SP district unit chief Raj Mangal Yadav said there will be intense protests, and the minister will not be allowed to enter Ballia if the administration doesn't take action against him. On Tuesday, Shukla alleged that the SP chief enjoyed the patronage of Pakistan spy agency, Inter-Services Intelligence (ISI) and said he may even go for religious conversion to appease Muslims.

"Chief Minister Yogi Adityanath has become a challenge for the Islamic world. Samajwadi Party chief Akhilesh Yadav is getting all support from them. Akhilesh is getting 'sanrakshan aur sujhav' (patronage and advice) from the ISI. It is possible that he might also be getting economic support from it," Shukla had said.

"To appease Muslims, Yadav had performed 'namaz' and observed 'roza' (fast). He can also go for 'matantaran' (religious conversion) and 'khatna' to get their votes," he said, adding that the former chief minister was doing so at the behest of Pakistan. "On the directions of the ISI, Yadav is glorifying Jinnah. He is issuing such statements that Pakistan and the Taliban want.