Advertisement
Home / India / RSS to go all out for BJP, with Raje rider

RSS to go all out for BJP, with Raje rider 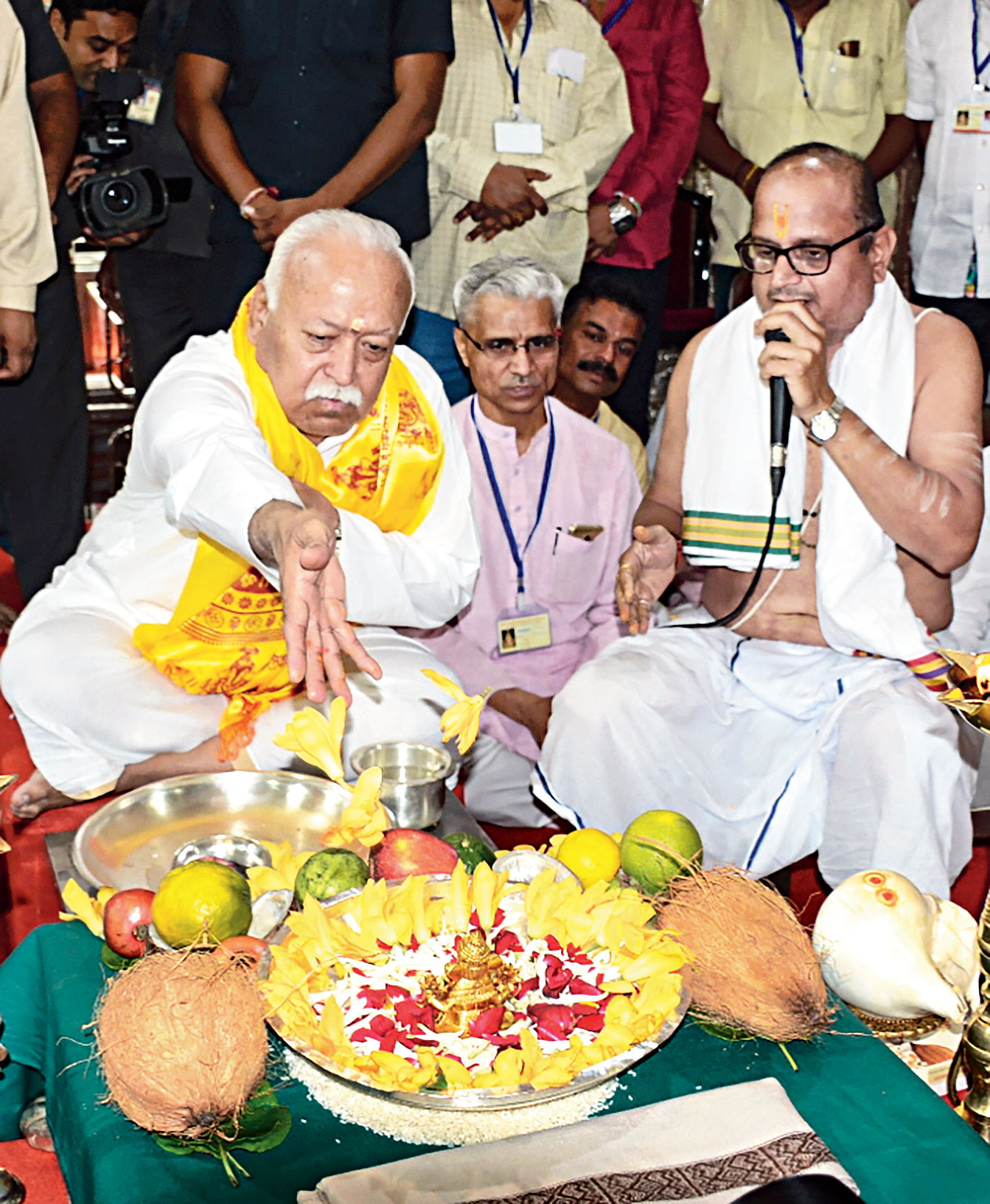 The Rashtriya Swayamsevak Sangh, led by its chief Mohan Bhagwat, has decided to throw its full weight behind the BJP in the Rajasthan Assembly elections, sweeping aside deep differences with chief minister Vasundhara Raje Scindia who is believed to be battling anti-incumbency.

Bhagwat has already visited Rajasthan many times in what is being seen as an effort to mobilise RSS leaders and cadres on the ground, amid reports that they are deeply disappointed with the chief minister and have decided to remain neutral in the election campaign, sources said.

Officially, the RSS denies that Bhagwat’s visits have anything to do with next month’s elections. “Sarsanghchalak’s tours are planned months in advance. It has nothing to do with the elections,” one RSS leader said.

Bhagwat spent 10 days at a stretch in Rajasthan last month, which many found “unusually long”.

The buzz in the Sangh is that the unprecedented mobilisation being undertaken in the state was on the condition that if the BJP wins, beating the odds, there would be a new chief minister. “If the BJP wins, there could be a change of leadership. The RSS may not accept Vasundhara as chief minister again,” a BJP leader said.

The RSS, which claims to be apolitical, is known to canvass votes for the BJP during elections. But in many places, RSS cadres sometimes lie low and refrain from campaigning if popular sentiment is against the incumbent.

“The RSS has a strong organisation in all the three poll-bound states of Rajasthan, Madhya Pradesh and Chhattisgarh. The stress is on Rajasthan because the local government has turned very unpopular,” one RSS leader said.

According to him, the RSS leadership decided to hurl all its strength into the Rajasthan campaign after a meeting with BJP chief Amit Shah over the future leadership in the state.

Despite pressure from anti-Vasundhara factions for a change of leadership, Shah had decided to contest the polls under her leadership. Party insiders felt that a change before the elections could have led to chaos and rebellion in the state, where Vasundhara has enough loyalists in the Assembly. The picture could, however, change after the elections. Shah has taken charge of deciding candidates and many Vasundhara loyalists could be denied tickets, sources said.

“Amit Bhai has taken full charge. Many sitting candidates will be dropped and win-ability, not loyalty, will be the deciding factor,” a BJP leader said.

Shah cannot afford to lose Rajasthan since it would damage the party’s morale ahead of the 2019 Lok Sabha polls, sources said.

Of the three BJP-ruled states going to the polls, Rajasthan is seen to be the toughest battle for the party. The internal assessment by the BJP, party leaders said, showed that voters’ anger was not against the party but the chief minister.

“If we win Rajasthan then it will not be considered a victory of Vasundhara Raje. It will be a victory of Narendra Modi and Amit Shah,” a party leader said. Modi is scheduled to address a good number of rallies in the state to try and turn the tide against Vasundhara.

Relations between the RSS and Vasundhara have never been warm. The rift was evident as the post of the organisational secretary, occupied by an RSS leader, remained vacant for many years. Recently, the chief minister took on even Shah and did not allow him to appoint a state party chief of his choice.