RSS leader, 4 others booked for enactment of Babri mosque demolition at Karnataka school

Puducherry Lt. Governor Kiran Bedi and Union minister D. V. Sadananda Gowda were among the dignitaries at the the event 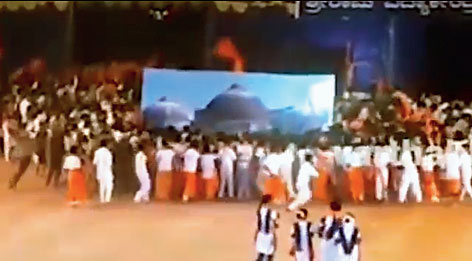 Five members of a school management near Bantwal in Dakshina Kannada district have been booked for the alleged enactment of the Babri mosque demolition by the students at its annual sports day.

Puducherry Lt. Governor Kiran Bedi and Union minister for chemical and fertilisers D. V. Sadananda Gowda were among the dignitaries who attended the event on Sunday.

The case has been registered against RSS leader Kalladka Prabhakar Bhat and four others who run the Sri Rama Vidya Kendra in Kalladka, some 30 kms from the coastal city of Mangaluru, under sections 295(A) and 298 (hurting religious sentiments) of the IPC.

The police action came on a complaint by a Popular Front of India leader Aboobacker Siddique, who lives in the same area.

'We have booked five persons of the school management following a complaint by a PFI activist. We have not arrested anyone because investigations are ongoing. There is a half-a-minute video based on which the complaint has been lodged. We are gathering evidences,' superintendent of police, Dakshina Kannada district, B. M. Laxmi Prasad told PTI.

'The mosque was demolished by the Kar Sevaks with whatever equipment they had in their hands. With Hanuman like energy, the Babri Masjid was demolished,' said the commentator during the show.

Then, the students are seen jumping and waving Saffron flags.

The poster is then torn into pieces.

Kiran Bedi tweeted about the show and praised the students' performance.

She said they should get a chance to showcase their talent at the Republic Day celebrations in New Delhi.

Bedi, who posted a video of the event, said, 'another formation of d school children made was for the proposed Ram Mandir at Ayodhya.

All such performances enabled d school ensure all of its 3800+ school children participate in d annual festival of Sri Rama Vidya Kendra, Kalladka village near Mangalore.'

After a social media outrage, Bhat defended the event saying it was an attempt to create awareness on episodes from our history and spread the spirit of patriotism.

He said the students choose a relevant subject for every annual event and they picked the Ayodhya issue this year in the wake of the Supreme Court verdict.