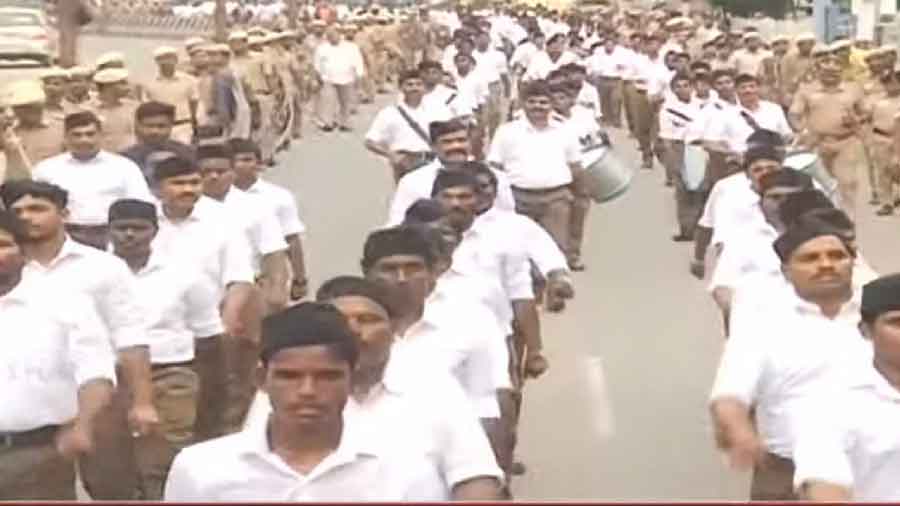 The Rashtriya Swayamsevak Sangh (RSS) on Sunday held route marches in three towns of Tamil Nadu including Cuddalore while the Viduthalai Chiruthaigal Katchi distributed copies of 'Manusmrithi' to oppose the right wing organisation.

Volunteers of the RSS took part in the marches in full uniform of white shirt and khakhi trousers amid tight police security in Cuddalore, Kallakurichi and Perambalur.

An RSS release said that the route marches are in commeration of saint Vallalar's (1823-1874) 200th birth year, Mahatma Gandhi's 153rd birth year and to celebrate the 75th anniversary of independence. Public meetings were held following the marches.

VCK founder-president Thol Thirumavalavan distributed booklets of 'Manusmrithi' here and said his party has distributed about 1 lakh copies --of select portions from the text-- across Tamil Nadu. The move is to oppose the RSS and its ideology, which reflected 'Manusmrithi,' according to the party. VCK is an ally of Tamil Nadu's ruling DMK.

The RSS has postponed its route marches and related events in respect of other locations in Tamil Nadu. On November 5, the organisation said that it would appeal against a single judge order of the Madras High Court granting permission for the events in the 44 towns/cities with conditions. The RSS had sought the court's approval to hold the events in 50 places.