US watchdog alarm on repression amid 370 blitz 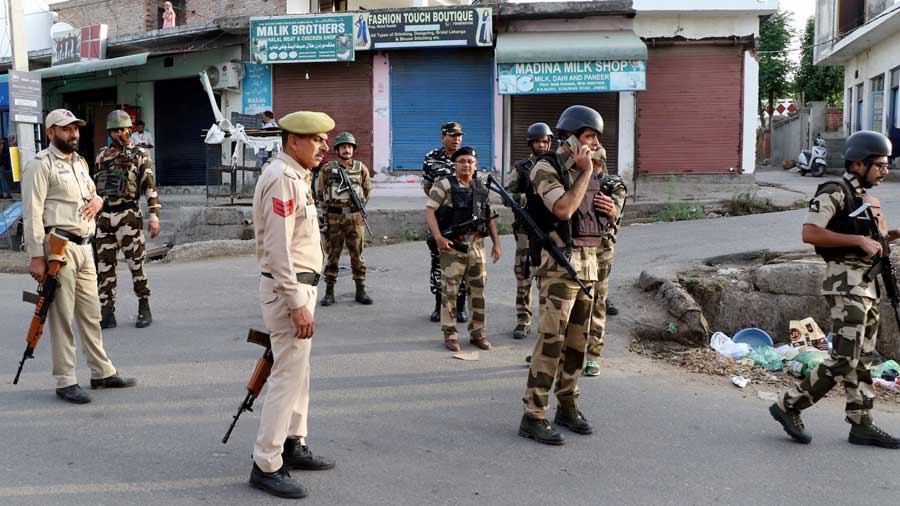 The Centre claims that the scrapping of Jammu and Kashmir’s special status has ushered in an era of development and governance.
File picture
Muzaffar Raina   |   Srinagar   |   Published 04.08.22, 02:27 AM

The New York-based Human Rights Watch on Wednesday accused “Indian authorities” of continuing to pursue repressive policies in Kashmir and denying freedom of expression and other basic rights to people, at a time the Narendra Modi government has launched a propaganda blitz ahead of the third anniversary of the revocation of Article 370 provisions.

The Centre claims that the scrapping of Jammu and Kashmir’s special status has ushered in an era of development and governance.

The HRW said in a statement that the government’s “serious rights violations” and failure to investigate and prosecute abuse allegedly perpetrated by security forces had increased the insecurity among Kashmiris.

Ganguly pointed out that the government on August 5, 2019, revoked the “constitutional autonomy of Jammu and Kashmir and split the state into two federally governed territories”.

“The government action was accompanied by serious rights violations including arbitrary detention of hundreds of people, a total communications blackout, and severe restrictions on freedom of movement and peaceful assembly,” she said.

“Since then, the authorities have released many of the detainees and restored the Internet, but have intensified their crackdown on media and civil society groups, including through frequent use of counterterrorism and public safety laws,” the statement added.

The HRW, a global human rights watchdog, said the Indian authorities appeared more concerned about projecting an image of normality than ensuring rights and accountability, adding that the assault on fundamental freedoms and the failure to protect minority groups at risk needed to end.

The HRW said the authorities have invoked the Public Safety Act and terrorism allegations, conducted raids and arbitrarily detained journalists, activists and political leaders without evidence and meaningful judicial review.

“Since August 2019, at least 35 journalists in Kashmir have faced police interrogation, raids, threats, physical assault, restrictions on freedom of movement, or fabricated criminal cases for their reporting. In June 2020, the government announced a new media policy that made it easier for the authorities to censor news in the region,” it said.

The HRW said militants had killed at least 118 civilians, including 21 minority Hindu and Sikh communities, in the past three years.

The rights group accused the government of failure to facilitate the safe return of Kashmiri Pandits.

“Instead of addressing human rights concerns, Indian officials have sought to project the appearance of progress,” the HRW said.

Ganguly said the security forces’ raids and targeted attacks by militants in Kashmir were grim reminders of the unending cycle of violence linked to “repressive Indian government policies and the failure to bring abusive forces to account”.