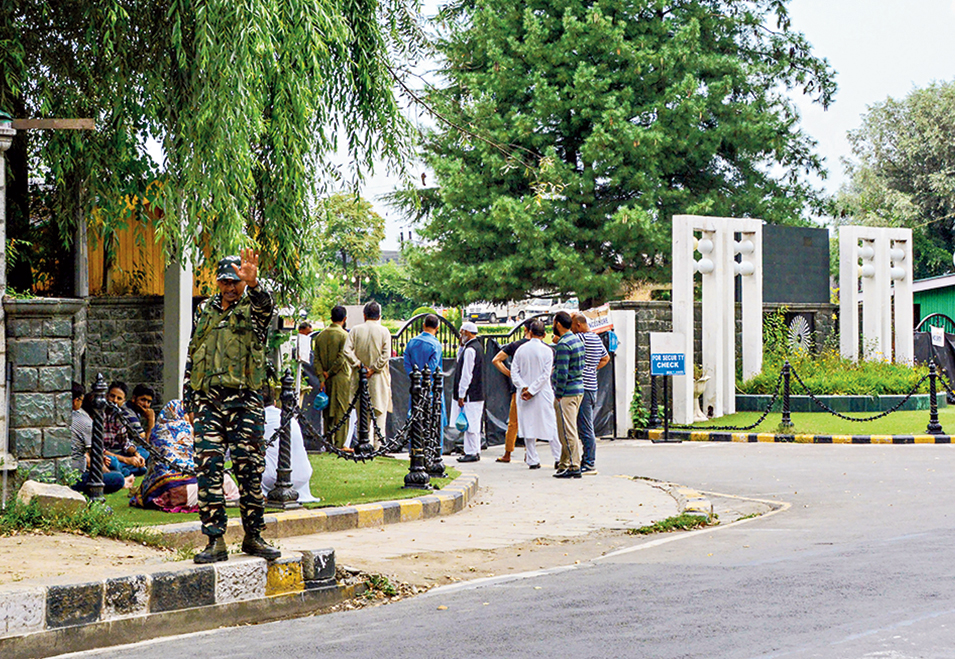 Relatives and supporters of Jammu and Kashmir leaders and former MLAs wait to meet them at SKICC in Srinagar on Monday.
(PTI)
Muzaffar Raina   |   Srinagar   |   Published 02.09.19, 10:56 PM

Rats are on the prowl inside Kashmir’s resort-turned-VVIP prison, where three dozen top pro-India politicians are being held since their arrest last month when the state’s special status was revoked.

Family and official sources said two politicians, one each from the Peoples Democratic Party and the National Conference, were bitten by rats while asleep in their rooms on Saturday night.

Jail superintendent Javed Bakshi did not respond to repeated calls from The Telegraph.

The politicians are lodged at the premier Centaur Lake View hotel, located on the banks of the Dal Lake, that has been designated a sub-jail. They are among hundreds arrested as part of a massive government clampdown on dissent. Shah Faesal, the IAS topper who gave up civil service for public life, is among them.

“Bandh is being administered the rabies vaccine. I will have to check whether Nizamuddin sahib is being treated,” an official said. Family sources confirmed the details.

Bandh is the son of former minister and three-time Pulwama legislator Khalil Bandh. The father and son duo had crossed over to the National Conference from the PDP in July. The senior Bandh is under house arrest. He had been badly wounded in a mob attack during the 2016 agitation and was then admitted in the AIIMS, New Delhi, for months.

Bhat is a former Bandipora MLA.

The rat horror has triggered panic among the inmates, who have “verbally” complained to the authorities.

Some relatives fear it could be a deliberate attempt to terrorise the high-profile inmates. “Otherwise, how do you expect rats to be present inside a three-star hotel?” a relative asked.

Journalists are barred from entering the premises.

On the inmates’ list are the erstwhile who’s who of Kashmir politics.

Ali Mohammad Sagar, who was a senior minister in Omar Abdullah’s cabinet, and Mubarak Gul, a former Speaker, are being held there. As are Naeem Akhtar and Zahoor Mir, who were ministers in the PDP-BJP government led by Mehbooba Mufti. Former BJP ally Sajjad Lone is also lodged inside.

This newspaper approached some relatives with a plea to take a list of questions to some jailed politicians, but they said only fruits were being allowed inside. The Telegraph is protecting the identity of the politicians and the relatives.

“We have to drop mobile phones, wallets and even paper and pen at the gate,” a relative said.

“The politicians are battling loneliness, anxiety and now the rat horror,” another visitor said. The visitor quoted a politician as saying they remain confined to their rooms on the first floor of the hotel. They have access to television and can dine together but can’t come down to the ground floor — except when they meet the guests — and are not provided newspapers.

“We are all being monitored by CCTVs,” a visitor quoted a politician as saying.

“Nobody was allowed to meet us for the first couple of weeks. The permission was granted after the sister of a politician approached court. For a few days, they could meet us every day, but now the visit has been restricted to Sundays and Wednesdays.”

Former chief ministers Mehbooba Mufti and Omar Abdullah are being held at separate guesthouses. They were allowed to meet close relatives for the first time in three weeks. Farooq Abdullah, another former chief minister, is under house arrest.