Stones were allegedly pelted at the BKU leader's convoy in Rajasthan on Friday, damaging the rear windshield of his car 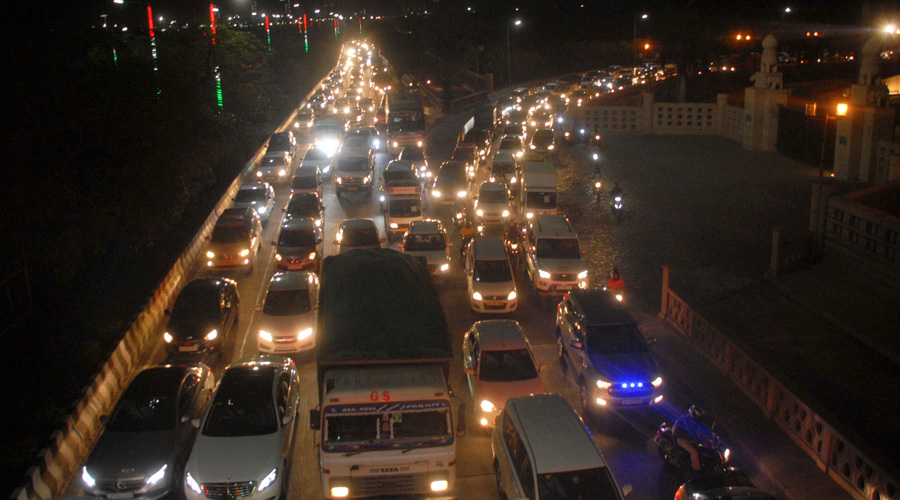 Traffic at Chilla border due to blockade by farmers after BKU leader Rakesh Tikait's convoy was attacked in Rajasthan's Alwar, during their ongoing agitation against three farm laws, in Noida.
PTI photo
PTI   |   Aligarh   |   Published 04.04.21, 02:09 AM

Bharatiya Kisan Union (BKU) leader Rakesh Tikait claimed on Saturday that the attack on his convoy of vehicles in Rajasthan’s Alwar was “pre-planned by BJP workers” and said it should serve as a reminder to the farmers protesting against the three new farm laws of the Centre about the travails and challenges they are going to face in the days to come.

Addressing a kisan mahapanchayat at Bhaimalkheda village in Uttar Pradesh’s Aligarh district, Tikait said such attacks “are, in fact, strengthening our resolve to further intensify our struggle, which is a battle for our existence”. After the mahapanchayat, he told reporters: “We are mentally prepared for more such incidents.”

Stones were allegedly pelted at the convoy of Tikait in Rajasthan on Friday, damaging the rear windshield of his car. Police detained a student leader, who the BKU claimed belonged to the Akhil Bharatiya Vidyarthi Parishad (ABVP), the student wing of the RSS. The BKU accused the BJP of being behind the attack.

Tikait issued a call at the mahapanchayat to the protesting farmers to be mentally prepared to continue with their agitation at least till the end of the year, when they would taste victory.

He urged them to be mobile phone savvy so that they can be active on social media.

Tikait, who held a mahapanchayat in Aligarh for the first time after the farmers’ agitation was launched in November last year, alleged that corporates had fully entrenched themselves in the present ruling dispensation, including the Prime Minister’s Office.

He said how else could one explain the construction of huge grain depots and godowns in several parts of the country “even before the controversial farm laws came to existence”.

The BKU leader said this itself provides conclusive evidence of the government’s intentions.

He warned the farmers that even more draconian measures are on the anvil as far as the farm laws are concerned, including stringent regulations regarding crop seeds.

He said the three laws would make it impossible for the farmers to enjoy the right to use the seeds of their choice and frustrate them to such an extent that they would be compelled to sell their land to corporates.