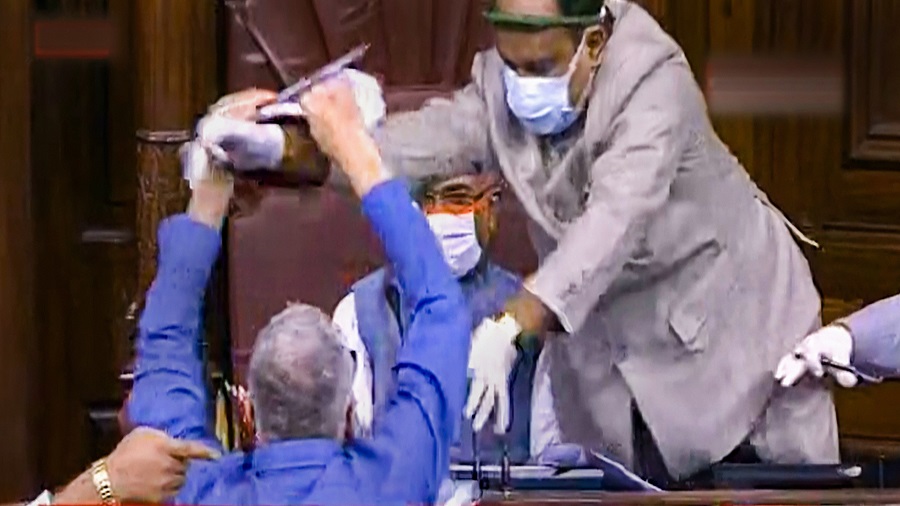 Rajya Sabha on Sunday passed two key farm bills amid a bedlam as Opposition members charged towards the podium of the presiding officer, flung the rule book at him, tore official papers and heckled him over their demand for a division of vote.

The Upper House, which witnessed a brief adjournment due to the pandemonium, passed by voice vote the Farmer's Produce Trade and Commerce (Promotion and Facilitation) Bill, 2020, and the Farmers (Empowerment and Protection) Agreement of Price Assurance and Farm Services Bill, 2020. The bills have already been passed by Lok Sabha and will now go to the President for his assent before they are notified as law.

Prime Minister Narendra Modi hailed the passage of the bills as a "watershed moment" in the history of Indian agriculture, asserting that they will ensure a complete transformation of the farm sector and empower crores of farmers.

In a series of tweets after Rajya Sabha passed the bills, Modi assured farmers that the existing government support system would continue. “We are here to serve our farmers. We will do everything possible to support them and ensure a better life for their coming generations," he tweeted.

Trouble started when the sitting of the House was extended beyond the scheduled time to allow passage of the bills. Opposition members, who felt such a move should be resorted to only by consensus, rushed into the Well, shouting slogans against the government and accusing it of being anti-farmer.

This forced Agriculture Minister Narendra Singh Tomar to cut short his reply and Deputy Chairman Harivansh took up the approval of the bills. Four Opposition sponsored motions to send the two bills to a House panel for greater scrutiny were negated by voice-vote, but the Congress, TMC, CPM and DMK members sought a division of vote on the issue.

As Harivansh over-ruled them saying division of votes can take place only when members are on their seat, TMC leader Derek O'Brien charged towards the podium, thrusting the rule book into the face of the Deputy Chairman.

House marshals thwarted the move and also blocked a book that was flung towards Harivansh. An attempt was also made to pull microphones away from the chair but the marshals physically stopped that from happening.

DMK leader Tiruchi Siva, who along with O'Brien, K.C. Venugopal of Congress and K. K. Ragesh of CPM had moved resolutions for sending the bills to the select committee, tore papers and flung them into the air.

They cheated. They broke every rule in Parliament. It was a historic day. In the worst sense of the word. They cut RSTV feed so the country couldn't see. They censored RSTV. Don’t spread propaganda. We have evidence. But first watch this pic.twitter.com/y4Nh9Vu9DA

Harivansh, who asked members to go back to their places and not come into the Well due to the COVID-19 protocol requiring physical separation, first muted the audio of the live proceedings but with the ruckus continuing, he adjourned the proceedings for 15 minutes.

When the House reassembled, Opposition parties chanted slogans but this did not prevent Harivansh from putting the bill to voice vote.

As the first bill got voice approval of the House and motions for sending it to a select committee were rejected, at least two members tried to climb on the table of Rajya Sabha officers but were pulled down.

Insisting that the rules were not being followed, Trinamool Congress's Derek O' Brien tore up the rule book from the Deputy Chairman's table. His mike was also dismantled, reported ndtv.com.

"This is a brutal murder of the Parliamentary democratic system," said Derek O'Brien, whose point of order was not accepted.

Both the bills were passed by voice vote and amendments moved by the Opposition parties rejected.

In his reply to the debate on the bill, Tomar said minimum price or MSP based procurement of agriculture crops from farmers will continue and is not related to the farm bills that seek to give cultivators freedom to market their produce.

Tomar said several sectors were impacted during the coronavirus times but not agriculture which saw a bumper crop and has record sowing of Kharif.

Contribution from the agri-sector in GDP did not decline, said Tomar while thanking the farmers.

He sought to allay fears that the bills were an attempt to dilute the country's public procurement system and will lead to exploitation by private companies, saying the minimum support price (MSP)-based buying by the government will continue.

"Purchase on MSP was done in the past, continues now and it will be continued in the future. There is no room for doubt on this," he said.

‘Mandis, trade will continue as before’

Mandis will not stop functioning and trading will continue as before. Under contract farming, the farmer will have full powers to fix a sale price of his choice and they will receive full payment within three days, he said.

The bills are facing staunch opposition from some farmer bodies as well as from within the ruling coalition. Harsimrat Kaur Badal, the food processing minister from the Shiromani Akali Dal party, resigned from the government last week.

Opposition parties as well as the SAD felt the bills are the first step toward removing the MSP which will force the farmers to make distress sales to private companies.

Farmers in states like Punjab and Haryana have been protesting against these bills, with their leaders alleging that the legislations will dismantle the existing system and leave them to the mercy of corporate interests.

The Farmers' Produce Trade and Commerce (Promotion and Facilitation) Bill, 2020 seeks to give freedom to farmers to sell their produce outside the notified APMC market yards (mandis). This, the government says, is aimed at facilitating remunerative prices through competitive alternative trading channels.

Farmers will not be charged any cess or levy for sale of their produce under this Act, according to the government.

It will open more choices for farmers, reduce marketing costs, and help them get better prices. It will also help farmers of regions with surplus produce to get better prices and consumers in areas with shortages at lower prices.

The Farmers (Empowerment and Protection) Agreement of Price Assurance and Farm Services Bill, 2020 seeks to give farmers the right to enter into a contract with agribusiness firms, processors, wholesalers, exporters, or large retailers for the sale of future farming produce at a pre-agreed price.

It seeks to transfer the risk of market unpredictability from farmers to sponsors.

Tomar said this legislation guarantees cultivators the price they negotiate at the time of sowing itself.

A third bill, the Essential Commodities (Amendment) Bill, 2020 that seeks to remove commodities like cereals, pulses, oilseeds, onion, and potatoes from the list of essential commodities and will do away with the imposition of stock holding limits, is to be moved separately.

Swaminathan Committee, which has given several suggestions on agricultural reforms, had asked that the MSP should be fixed after adding 50 per cent profit over the input costs of farmers.

"The UPA government was for 10 years but did not accept to fix MSP based on 50 per cent profit over the input cost," he said, adding that a decision was taken by Prime Minister Narendra Modi and the effect was reflected in the price of the purchase from the farmers.

The minister cited data of purchase of wheat, paddy, soybean, groundnuts, suggesting higher dispensation of money towards the purchase from farmers by the present government.

Prime Minister Narendra Modi said new laws were a "watershed moment" in the history of Indian agriculture, asserting that they will ensure a complete transformation of the farm sector and empower crores of farmers.

In a series of tweets after Rajya Sabha passed the bills, Modi said these proposed laws will liberate farmers from numerous adversities as he noted that peasants were for decades bound by various constraints and bullied by middlemen.

He assured farmers that the existing government support system would continue.

Modi asserted, "I said it earlier and I say it once again: System of MSP will remain. Government procurement will continue.

"We are here to serve our farmers. We will do everything possible to support them and ensure a better life for their coming generations."