Most Maharashtra MLAs cast their votes by 2 pm 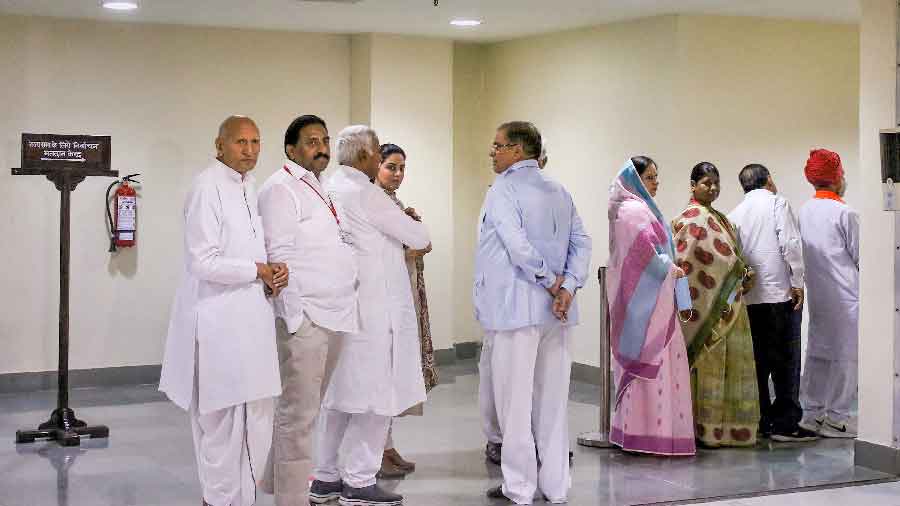 Congress and BJP MLAs wait in a queue to cast their votes during the Rajya Sabha elections, at Rajasthan Assembly in Jaipur
PTI Picture
Our Bureau, PTI   |   Jaipur   |   Published 10.06.22, 02:41 PM

A majority of Haryana MLAs on Friday cast their vote for the two Rajya Sabha seats in the state while Independent legislator Balraj Kundu decided to abstain, saying the ruling BJP has been hit by scams while the Congress has "insulted" people by fielding outsider Ajay Maken.

Congress' Kuldeep Bishnoi was among the MLAs who cast vote immediately after polling began at 9 am while many of his party legislators reached here from Raipur via Delhi to cast their vote later in the day.

The polling for the two seats, which started at 9 am, will continue till 4 pm and counting of votes will be taken up soon after, officials said.

The BJP-JJP MLAs and some Independents, who were lodged in a luxury hotel on the outskirts of Chandigarh for the past two days, reached the assembly complex here in a bus to cast their vote.

The BJP has fielded former minister Krishan Lal Panwar, while Maken, a former Union minister, is the Congress nominee. Media baron Kartikeya Sharma has entered the fray as an Independent.

Kundu, who has been vocal against the Manohar Lal Khattar government on several issues, announced in the afternoon that he will abstain from voting.

Talking to reporters, the legislator from Meham, claimed, "I received many offers including monetary. But I decided to act as per my conscience".

Kundu alleged that the BJP-JJP government has been hit by many scams and that he cannot support the party or any candidate supported by it or its ally.

He also hit out at the Congress for fielding Maken, saying "the party insulted people of Haryana by fielding an outsider".

"Therefore, due to these reasons, I have decided not to cast vote and decided to abstain from voting, he said.

To a question, Kundu said he does not know whether anyone will stand to gain or lose with his decision, but he decided to act as per his conscience.

Congress' Bishnoi arrived here Thursday evening from Delhi. He was not part of the Congress MLAs, who were lodged in a resort in Raipur.

While leaving the venue after having cast his vote, Bishnoi, while replying to a question from reporters, said he had voted "as per my conscience".

The Congress had shifted majority of its MLAs to Raipur a week ago fearing poaching of its legislators. They reached Chandigarh from Delhi around 11 am when the polling was on.

Congress leader Deepender Singh Hooda, who was also accompanying the Congress MLAs from Delhi, claimed that Maken will win comfortably.

"Our candidate will get more votes than the total strength of our MLAs," said Deepender.

The Congress has 31 MLAs in the 90-member House.

Senior Congress leader and MLA Raghuvir Singh Kadian said that Congress has the required numbers needed for victory of its candidate.

"Our candidate will get all the 31 votes of the Congress. Besides, he will also get two-three votes in addition," claimed Kadian, though he did not specify who were the MLAs from other outfits that could support.

After reaching Delhi on Thursday evening from Raipur, the Congress MLAs arrived in Chandigarh in two luxury buses after a night halt in the national capital.

From Delhi, they arrived at the residence of former chief minister Bhupinder Singh Hooda, from where they went together to cast their vote.

In the morning, Congress leader Kiran Choudhary, who was not part of the MLAs lodged in Raipur resort, met Hooda at his residence here and later went to cast her vote.

The Rajya Sabha polling is also being linked to the prestige of former chief minister Bhupinder Singh Hooda as it will be his first challenge after the party appointed his loyalist Udai Bhan as the state unit chief after replacing senior party leader Kumari Selja.

While the BJP with 40 MLAs in the 90-member Haryana Assembly has nine more than the 31 first preference votes required for a straight win, the contest has become keen for the second seat with the entry of media baron Kartikeya Sharma, an Independent.

Kartikeya has the backing of BJP-JJP combine, most of the Independents, and Gopal Kanda, lone MLA of the Haryana Lokhit Party.

The Congress has 31 members in the state Assembly, just enough to help its candidate win a seat. Its prospects could be in jeopardy in case of cross-voting.

In the 90-member Haryana Assembly, the BJP has 40 MLAs while the Congress has 31.

The JJP, which is an ally of the BJP, has 10 legislators while the Indian National Lok Dal and Haryana Lokhit Party have one each and seven are independents.

Kartikeya Sharma is son of former Union Minister Venod Sharma, who had also remained a minister in the erstwhile Bhupinder Singh Hooda-led government.

RS polls: Most Maha MLAs cast their votes by 2 pm

Mumbai: A total of 278 Maharashtra MLAs cast their votes till around 1.30 on Friday in the election for six Rajya Sabha seats in the state, where a close contest is being played out between the ruling Shiv Sena and the opposition BJP for the sixth seat, officials said.

Voting is underway at the Vidhan Bhavan, the state legislature complex here. The polling process, which began at 9 am, will go on till 4 pm and the results will be declared in the evening.

The BJP took exception to the votes cast by three legislators - one each from Shiv Sena, NCP and Congress - the parties that share power in the state as part of the Maha Vikas Aghadi (MVA), claiming that these three members showed their ballots to the authorised agents in such a way that it violated the rules.

The day also saw the Bombay High Court rejecting Maharashtra minister and NCP leader Nawab Malik's petition seeking release from jail to cast his vote in the Rajya Sabha polls. Malik had sought that he be either released from custody on a bond or be permitted to go with a police escort to the Vidhan Bhavan for voting. However, the high court said it did not wish to set a wrong precedent by entertaining Malik's plea.

Former home minister Anil Deshmukh had also filed a similar plea the high court, but it is yet to be heard.

Malik and Deshmukh are currently lodged in jail in connection with different money laundering cases being probed by the Enforcement Directorate (ED).

The 288-member Legislative Assembly is the electoral college for the biennial elections. But the total votes have come down to 285 since there is a vacancy due to the death of Shiv Sena MLA Ramesh Latke and a special court on Thursday rejecting the pleas filed by Malik and Deshmukh seeking a day's bail to vote in the elections.

A statement from the state Information Department said that out of the 285 MLAs, 278 cast their votes till 1.24 pm.

There are a total of seven candidates in the fray for six seats. While the BJP has fielded Union minister Piyush Goyal, former state minister Anil Bonde and former MP Dhananjay Mahadik, the Shiv Sena has given opportunity to MP Sanjay Raut and Sanjay Pawar. From the NCP, Praful Patel is in the election ring, while the Congress has fielded Imran Pratapgarhi.

The contest is primarily for the sixth seat - between BJP's Mahadik and Sena's Pawar. This is after more than two decades that Maharashtra is witnessing a contest in the Rajya Sabha polls.

"About 10 to 12 objections that were raised, have been ruled out by the election authorities," Desai said.

Alavani said as per rules voter has to show ballot to their authorised agent from a safe distance.

But two of them gave their ballot paper to their agents, while Kande showed it in a such a way that two agents of different parties could see it, he added.

"We have asked the returning officer to go through the video-recording and see check that rules have been violated. We will seek a hearing from the central election authority if no action action is taken here," Alavani said.

Yashomati Thakur accused the opposition party of vitiating the atmosphere "even in the polling booth".

Minister of State Dattatraya Bharne, who belongs to the NCP, was the first to cast his vote.

Shiv Sena MLA Mahendra Dalvi, who is ailing, came to the venue using a walker to cast his vote, while BJP's Laxman Jagtap, who is also indisposed, came in an ambulance from Pune to exercise his franchise.

Bhujbal, a senior NCP leader, expressed confidence that all four candidates of the MVA will win. Congress leader and Revenue Minister Balasaheb Thorat also said that the MVA candidates will sail through comfortably in the first round.

State Congress chief Nana Patole said countdown has begun for the BJP to face a defeat.

Health Minister Rajesh Tope, an NCP leader, said there were no differences among the MVA allies.

In the morning, the All India Majlis-E-Ittehadul Muslimeen (AIMIM) announced that it would vote in favour of the Congress candidate. The announcement was made by AIMIM Lok Sabha member from Aurangabad Imtiaz Jaleel hours before the polling began.

Describing AIMIM as the "B team" of the ruling alliance, BJP legislator Atul Bhatkalkar said that was the reason why its two legislators were supporting the MVA candidates.