15 ministers were sworn in on Sunday, fulfilling a key demand of Sachin Pilot whose rebellion last year shook the state's Congress government 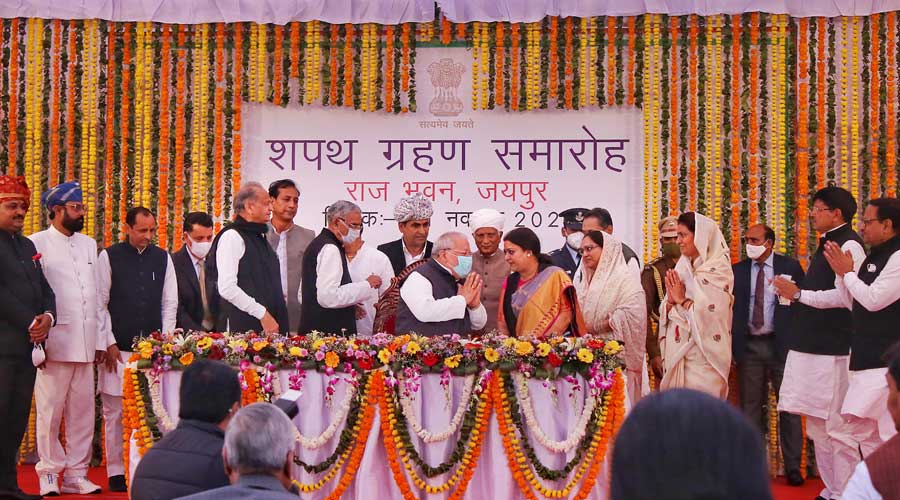 Rajasthan Chief Minister Ashok Gehlot on Monday allocated portfolios to ministers of his expanded cabinet, retaining home and finance with him.

Twelve new ministers were inducted and three ministers of state were elevated to the cabinet rank.

The 15 ministers were sworn in on Sunday for the expanded Gehlot cabinet, fulfilling a key demand of former deputy chief minister Sachin Pilot whose rebellion last year shook the state's Congress government.

The chief minister along with the finance and home portfolios, has kept taxation, personnel, general administration cabinet secretariat, information and public relation, and information technology and communication.

The department for NRI and the Rajasthan State Investigation Bureau are under Gehlot.

Following the expansion, the council of ministers in the state has 19 cabinet ministers and 10 ministers of state. The Rajasthan Cabinet can have a maximum of 30 ministers, including the chief minister.

Vishvendra Singh and Ramesh Meena were sacked last year from the Rajasthan cabinet along with Pilot for rebelling against Gehlot's leadership. Vishvendra Singh in this expanded cabinet got back his old portfolio of tourism.

Pilot and 18 other MLAs rebelled against Gehlot last year.

Mamta Bhupesh was allocated women and child development, Bhajan Lal PWD, Tikaram Jully social justice and empowerment, as they were elevated to cabinet rank from minister of state.

Zahida Khan (science and technology, printing and stationary, primary and secondary education, art, literature and culture) is also a new minister of state in the Gehlot cabinet.

The ministers of state from the old cabinet who retained their portfolios are Arjun Singh Bamaniya (tribal area development), Ashok Chandna (sports and youth affairs) and Subhash Garg (technical education).

Those who got new portfolios are Sukhram (revenue and labour), Bhanwar Singh Bhati (power-independent charge) and Rajendra Yadav (higher education).

In the new and expanded cabinet, the three women ministers are Mamta Bhupesh and Shakuntala Rawat (cabinet rank) and Zahida (minister of state).

Minister of State Rajendra Gudha is one of the six MLAs who defected from BSP to the Congress.

Among the 15 ministers who took oath on Sunday, Hemaram Choudhary is the senior-most MLA. He is a six time MLA.