Advertisement
Home / India / Rafale message to ‘those who raised eye’

Rafale message to ‘those who raised eye’ 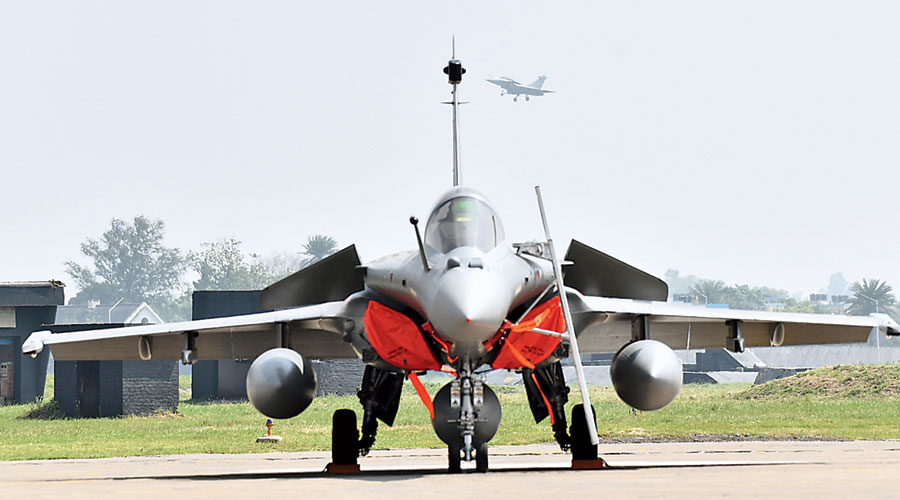 A Rafale aircraft after its induction into the Golden Arrows squadron of the Indian Air Force in Ambala on Thursday.
Picture by Prem Singh
Imran Ahmed Siddiqui   |   New Delhi   |   Published 11.09.20, 05:36 AM

Defence minister Rajnath Singh on Thursday called the formal induction of five Rafale fighters jets into the Indian Air Force a “game changer” and asserted that it was an important step in the light of the prevailing security situation that “has been created along India’s border”.

“It sends a strong message to the world and specially to those who have dared to raise an eye at us. This induction is a game changer in the light of the prevailing situation that has been created at the border,” Rajnath said while referring to the ongoing border tensions with China but not naming the neighbour.

The armies of the two countries have been locked in an intense standoff along the Line of Actual Control in eastern Ladakh since May. Several rounds of diplomatic and military discussions have failed to break the deadlock. Defence minister Rajnath himself had met his Chinese counterpart in Russia last week but not much emerged from the session.

Rajnath, his French counterpart Florence Parly, Chief of Defence Staff General Bipin Rawat and IAF chief R.K.S. Bhadauria were among those who attended the formal induction ceremony for the Rafale jets at Haryana’s Ambala Air Force Station, the country’s oldest IAF base.

The first set of five Rafale fighter aircraft arrived in India on July 27 and were formally inducted on Thursday to the IAF’s 17 Squadron “Golden Arrows”.

Rajnath complimented the IAF for its quick deployment along the LAC during the border dispute with China.

“I want to congratulate the IAF for the presence of mind they showed and the speed with which it deployed its assets at forward bases. It exudes confidence that our air force is fully prepared to fulfill its operational obligations,” the defence minister said.

The IAF, he said, plays a “crucial role in military deterrence and their actions will be a key in case of any future war”.

“The induction of jets is a game changer and it marks a historic moment for the country,” Rajnath added.

In an apparent reference to Pakistan, he said that while the current border situation had “drawn our attention, we should also not ignore the threat posed by cross-border terrorism”.

“We are very much aware of the security challenges along the northern borders and we have to stay alert for the protection of our nation,” Rajnath said.

Referring to his meeting with his Chinese counterpart in Moscow, the defence minister said: “Recently, I put forth India’s point of view in front of the world.… I also made everyone aware of our resolve to not compromise with our sovereignty and territorial integrity under any circumstances. We are strongly committed to doing everything possible towards this.” 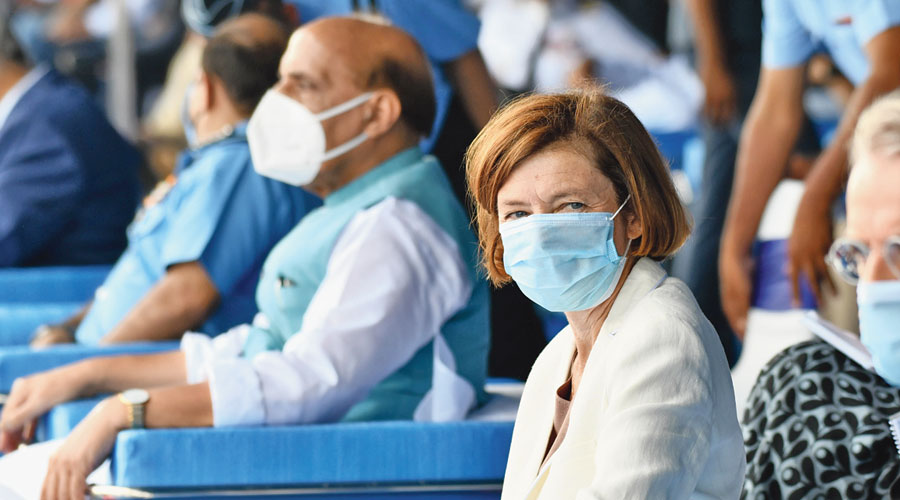 Defence minister Rajnath Singh and his French counterpart Florence Parly at the IAF airbase in Ambala on Thursday.
Picture by Prem Singh

Rajnath said India’s strengthening of its defence capabilities had always been driven by the desire for world peace.

“India will not take any such step that can disturb peace anywhere. We expect the same from our neighbours and the rest of the world,” he said while underlining that India’s responsibilities were not limited to its borders alone. “We play a responsible role in the entire Indo-Pacific and the Indian Ocean Region.”

Of the 36 Rafale jets India has bought under an April 2015 deal inked during Prime Minister Narendra Modi’s visit to France, another 26 will be delivered on schedule by the end of 2021. The remaining five will be delivered later.

During the induction ceremony, a traditional “Sarva Dharma Puja” was performed, followed by an air display by the Rafale and the indigenous Tejas aircraft. A traditional water cannon salute was also given to the Rafale aircraft before the formal induction of the jets.

Welcoming the jets, the air force tweeted: “New bird in the arsenal of IAF.”