Apart from calling for a peaceful resolution of the situation, the country has not said much on the issue 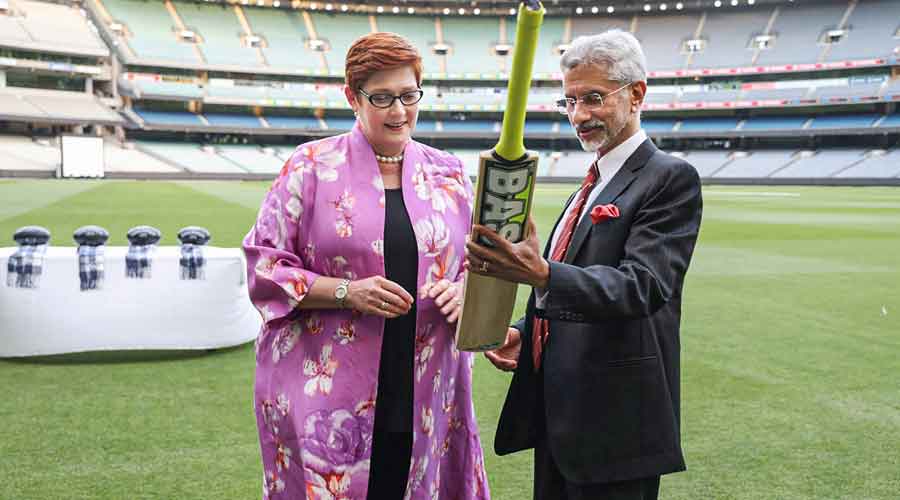 India on Friday charted its own course on Myanmar and Ukraine within the Quad at the foreign ministers’ meeting in Melbourne where external affairs minister S. Jaishankar iterated New Delhi’s position of not subscribing to national sanctions.

The US has already imposed sanctions on Myanmar and is considering another set of sanctions on Russia vis-à-vis Ukraine.

Explaining New Delhi’s position on Myanmar at the joint briefing, Jaishankar said India was one with the others on the importance of the democratic transition that had been underway in Myanmar and troubled that the country had moved in a different direction. India, however, said the countries’ shared land border mandated a different response.

“As an immediate land-border neighbour, we have some very specific concerns on Myanmar which also guide our thinking — concerns about insurgents operating there who some months ago killed a very senior military officer and his family; concerns about Covid and the lack of vaccination on our common border; concerns about a humanitarian situation which is arising from food shortages,” Jaishankar said.

On the unfolding Ukraine crisis, triggered after Russia amassed troops along its borders, he was not as forthcoming. Responding to a question posed to all four ministers on the crisis in general and the recent Russia-China pact in particular and whether there was consensus in the Quad, Jaishankar’s answer was vague. “We are for something, not against somebody,” he said.

India had earlier abstained from a United Nations Security Council vote on Ukraine in an effort to stay out of the crosshairs of the rivalry between the two key players of the Cold War. Apart from calling for a peaceful resolution of the situation, India has not said much on the issue.

While the Quad is widely perceived to be a grouping of democratic countries aimed at containing China, all four again insisted that it is an affirmative partnership that is not directed against any country or group of countries. The US, India, Japan and Australia make up the Quad.

With Ukraine now eclipsing the other crises the world is facing, the references to the protection of national sovereignty in the media interaction assumed more than just a China context this time round.

In his opening remarks, US secretary of state Antony Blinken sought to underscore the importance of the Quad

by drawing attention to the fact that it was being held in the midst of the crisis unfolding around Ukraine, once again urging American nationals to leave the country. Earlier in the day, the state department had issued such an advisory.

“Even as we continue to work relentlessly to try to resolve the crisis in Ukraine brought about by Russian aggression and to do that through diplomacy and deterrence — but being here now, even in the midst of that, I think only underscores our commitment to staying focused on the Indo-Pacific,” Blinken said. According to him, this focus would shape the trajectory of the 21st century.