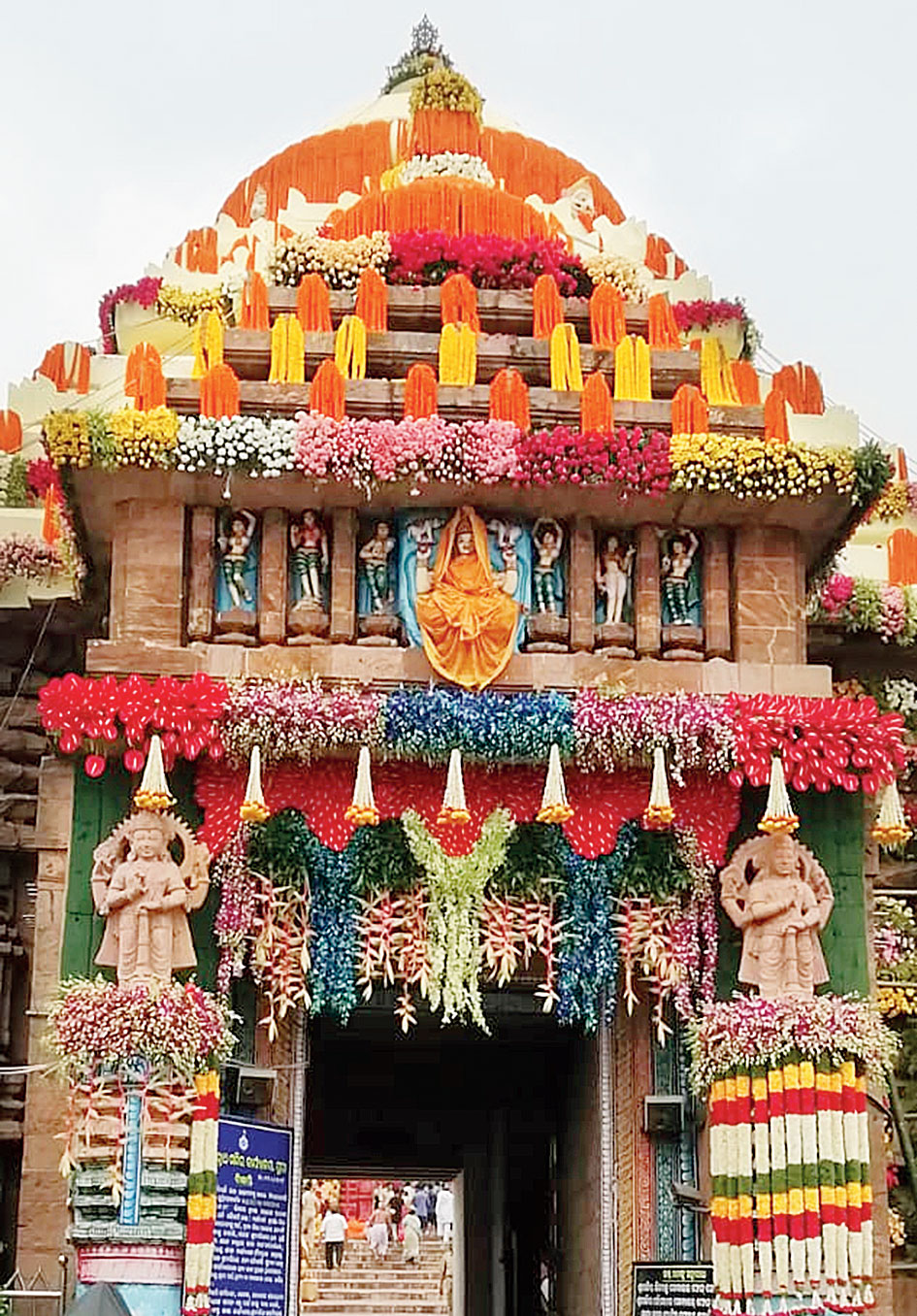 The Archaeological Survey of India has expressed “serious concern” over the floral decorations placed by a Delhi-based businessman on the gates and other structures at the Jagannath temple during Rath Yatra.

“The Shree Jagannath Temple is a protected monument. No one is allowed to cause any harm to it,” the superintending archaeologist, ASI (Bhubaneswar circle), Arun Malik, told The Telegraph.

“The administration did not seek our permission before decorating the temple with flowers and fruits. As a religious festival was under way, I preferred to remain silent and avoid controversy.”

Malik said he would travel to Delhi on Monday to take the matter up with his seniors.

“I will write to the Jagannath temple administration and my head office. This temple is different from others; it pains me to see any damage caused to the structure,” Malik said.

At a request from K.K. Sharma, a devotee and owner of a pharmaceutical company, the temple administration had given him permission to decorate the shrine on three days during the festival: during the Rath Yatra, Suna Vesha and Niladri Vije (the deities’ return to the main shrine). The last two occasions are yet to come.

During Rath Yatra on July 4, the main gate of the temple, the 22 pahacha (steps) and several other places inside the shrine were decorated with flowers and fruits. Sharma had earlier said that more than 20 truckloads of flowers would be used.

Malik’s reaction came after a high-level ASI technical team inspected the sanctum sanctorum on Saturday and tried to locate the joints in the structure from where water had seeped in when Cyclone Fani hit Puri on May 3.

“This is an annual inspection. Repairs have already started,” Malik said.

Temple PRO Laxmidhar Puja Panda said: “The ASI has not informed us about their concern so far. We will react when they formally lodge a complaint.”

A team of officials from the ASI’s technical core committee, Central Building Research Institute (Roorkee), Odisha public works department and the Jagannath temple administration surveyed the condition inside the inner chamber on Saturday.

A senior member of the technical core committee said: “We have received complaints from the servitors about a water leak. We fear there are multiple leaks. We’ll examine the structure and carry out permanent treatment.”

The core committee will also inspect other sites at the temple, including the Nata Mandap, Jagmohan and Bhoga Manadap.

“We’ll carry out chemical treatment. Some broken stones will be replaced with new stones,” another member of the committee said.

However, the team will not enter the temple treasury (Ratna Bhandar) for now to verify complaints about leaking water.

“It can be done later in keeping with formal procedure. Our prime concern now is the sanctum sanctorum,” one of the core committee members said.

“We cannot take up any repairs after the Lord returns to the temple on July 15. We have just a few days left for repairs and renovation.”