Amrinder Singh, accompanied by all MLAs and MPs from the state, alleges 'step-motherly' treatment from the Centre 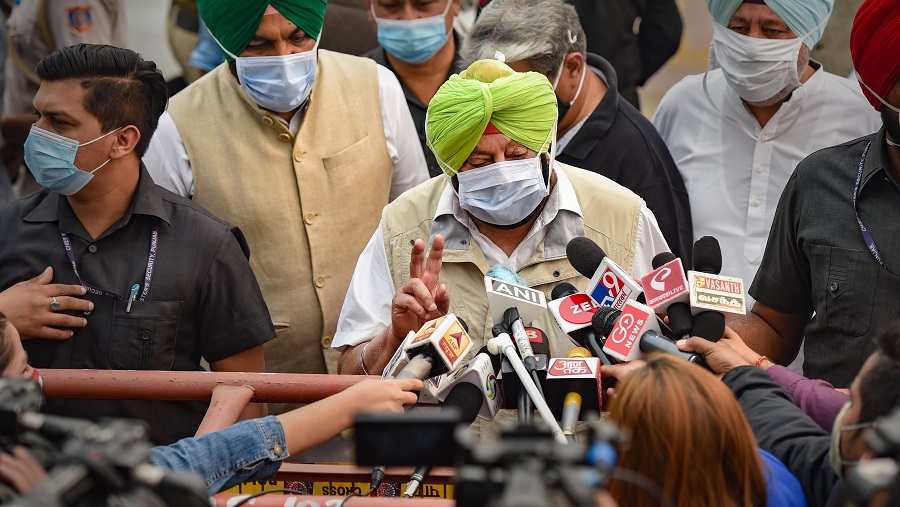 Punjab Chief Minister Capt. Amarinder Singh along with other leaders participates in a protest against the recent farm reform bills, at Jantar Mantar in New Delhi on Wednesday
PTI
Our Bureau, Agencies   |   New Delhi   |   Published 04.11.20, 02:58 PM

Punjab Chief Minister Amarinder Singh on Wednesday launched a dharna here to "save" his state and its farmers with a hard-hitting attack on the Centre, alleging "step-motherly" treatment towards Punjab.

Led by Amarinder Singh, all Congress MLAs and MPs from Punjab staged a dharna at Jantar Mantar here.

The Punjab chief minister said the Aam Aadmi Party had been "pressured" not to join the dharna as its government in Delhi had not passed amendment bills to protect the farmers.

The Congress, many other opposition parties and several farmers organisations have been protesting against the recent farm legislations, alleging that these will harm the interests of farmers and benefit corporates, a claim denied by the government.

The Centre has asserted that these new laws will be beneficial for farmers and will increase their income.

The Punjab Assembly last month had adopted a resolution rejecting the Centre's new farm laws and passed four bills it said will counter the contentious legislation enacted by Parliament.

The three farm bills -- the Farmer's Produce Trade and Commerce (Promotion and Facilitation) Bill, 2020, the Farmers (Empowerment and Protection) Agreement of Price Assurance and Farm Services Bill, 2020 and the Essential Commodities (Amendment) Bill, 2020 -- were passed by Parliament recently.