The agitators cited 'stubborn attitude of the government' for their decision 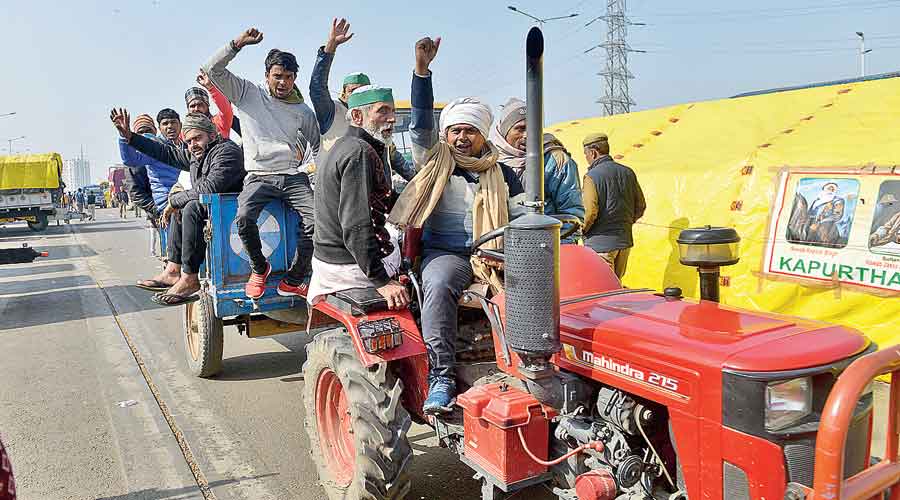 The protesting farmers on Monday night thanked the Supreme Court but politely declined to join the proceedings of the committee it plans to appoint to broker a solution on the three farm laws, citing the “stubborn attitude of the government”.

The Sanyukta Kisan Morcha, the banner under which farmer unions and collectives from across the country are demanding the repeal of the laws, had been silent all day after the hearing in the Supreme Court in the morning.

Later in the day, the Centre filed a 45-page affidavit in the court to claim that only a “limited number of farmers” and “others” were opposing the laws and that “farmers of the nation are happy”, PTI reported. The affidavit described the demand for repeal of the laws as “neither justifiable nor acceptable”. It also denied that the laws were “passed hurriedly” without consultation.

At night, the Morcha issued a statement in which it expressed great respect for the apex court and for its “understanding of the problem and comforting words expressed during the hearing”.

It said they have decided not to participate in the committee’s proceedings either individually or collectively because the “attitude and approach’’ of the government in court had made it clear they will not agree to any discussion on repeal of the laws that the farmers’ believe will be their “death warrant”.

The protesting farmers anticipate that the committee would be a repetition of what has happened in the eight meetings they have held with the government since November 26, when they began gathering at Delhi’s borders on the All India Kisan Sangharsh Coordination Committee’s (AIKSCC) call for Dilli Chalo.

Tens of thousands of farmers are camped at Delhi’s borders for over 40 days in the bitter cold and more than 70 have died. While the bulk are from Punjab, Haryana, Rajasthan and Uttar Pradesh, many farmers have come from as far away as Maharashtra, Madhya Pradesh, Karnataka and Tamil Nadu.

“Farmers and we as their representatives once again express our gratitude to the Honourable Supreme Court but regret our inability to accede their suggestions,’’ the statement said. The consultations on this issue were held by the eight union leaders who had been issued notices in the case and their lawyers, it added.

Since the Morcha and AIKSCC had early in the agitation decided not to approach the court for repeal of the laws, none other than the eight that were served notices by the court had impleaded in the case.

On Sunday, the AIKSCC had said that the “Supreme Court does not and cannot have any role” in resolving the political deadlock over the contentious farm laws, arguing that the decision to enact them was a political choice the Modi government made to give preference to corporate interests over farmers.

“The Modi government is shirking political responsibility of solving the crisis of it’s own making... It is misusing the Supreme Court as a political shield,’’ the AIKSCC said.

On Friday, after agriculture minister Narendra Singh Tomar had asked them to go to court as the government was not prepared to repeal the laws, the farmer unions had made it clear that they would continue with their agitation till their goal is met, even if the Supreme Court verdict is not in their favour.

The Morcha issued its statement late in the night after the court’s cause list was released for Tuesday, which made it clear that there would not be any more hearings but only pronouncement of orders.

According to the Morcha, its lawyers had requested another hearing on Tuesday to be able to get back after consulting the organisations they represent on the suggestions made by the court.

The Opposition parties, which are supporting the farmers’ demand for repeal of the laws rushed through Parliament in September overriding their protests, said they would take a call on their own future course of action depending on the Supreme Court verdict and the farming community’s response to it.

Raja later told reporters that the three discussed the hearing. “But the decision on what has to be done has to be taken by the farmers. They have to react to it. We stand by their demand for the repeal of the laws.’’

After the verdict and after the farmers reveal their cards, the Opposition parties could hold an all-party meeting in the coming days, and Congress interim president Sonia Gandhi has begun working the phones for it.

Meanwhile, Haryana police have filed a case against Bharatiya Kisan Union (Chaduni) leader Gurnam Singh Chaduni and others for vandalisation of the venue of chief minister Manohar Lal Khattar’s meeting in Karnal on Sunday.

Chaduni told reporters he took full responsibility for not allowing Khattar to hold his meeting to promote the bills, saying this was in response to the BJP’s efforts to break the farmers’ protest.

Khattar reached the site but his chopper could not land as the protesting farmers far outnumbered the BJP gathering and security personnel.