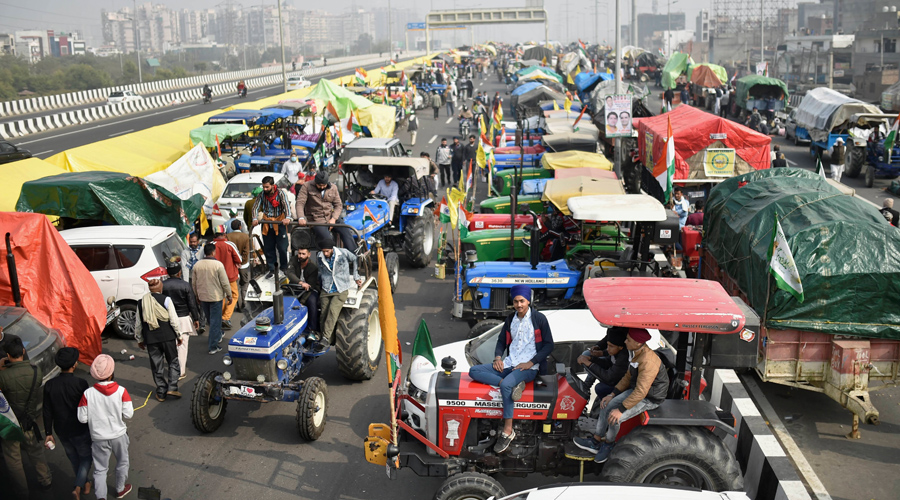 The proposed daily tractor march to Parliament during the upcoming Winter Session has not been withdrawn and a final call on this as well as the future course of the agitation will be taken in a Sunday meeting, farmer leaders said on Saturday.

To observe one year of the anti-farm law agitation, the Samyukt Kisan Morcha (SKM), an umbrella body of farmers' unions, had earlier this month announced that 500 farmers will participate in peaceful tractors marches to Parliament every day during the Winter Session starting November 29.

However, Prime Minister Narendra Modi on Friday announced the Centre will repeal the three farm laws, marking a climbdown by his government to meet the unrelenting demand of farmers protesting in several states against the reform measures.

SKM welcomed the Prime Minister's decision but said they will wait for the announcement to take effect through due parliamentary procedures. It also indicated that its movement for a statutory guarantee of MSP and demand for the withdrawal of the Electricity Amendment Bill will continue.

"Our call of tractor march to Parliament still stands. A final decision on the future course of the agitation and MSP issues will be taken in a meeting of the SKM at Singhu Border on Sunday," farmer leader and SKM core committee member Darshan Pal told PTI on Saturday.

Farmer leader and president of Bharatiya Kisan Union (Ugrahan) Joginder Singh Ugrahan said at the Tikri border point that the tractor march has not yet been withdrawn.

"The SKM will decide on the call for tractor trolly march to Parliament. So far, there is no call to withdraw it. A decision on this is likely to be taken on Sunday after the SKM's core committee meeting," he told PTI.

On January 26, a tractor rally had turned violent with protesters breaking barricades, attacking security personnel and storming the Red Fort, where they hoisted a religious flag.

Ugrahan reiterated that farmers will stay put here at Tikri and other borders until the Centre formally repeals these laws in Parliament. He said many farm unions are holding separate meetings to ponder over farms issues and future strategies after the prime minister's Friday announcement.

"Representatives of these farm unions will take part in the SKM meeting tomorrow," the farmer leader said, adding the Central government should give a legal guarantee to MSP for all crops.

Another farmer leader at Tikri Border and SKM member, Sudesh Goyat said, "Farmers cannot trust the Centre on farm laws as earlier too they had announced to give one rank one pension (OROP) but it is yet to be done."

"So, we have decided not to leave the site till these laws are formally repealed in Parliament. Mobilisation of farmers on Delhi borders on November 26 to mark the first anniversary of the agitation will continue," she said.

She added that so far there is no call to withdraw tractor march.

Thousands of farmers from Punjab, Haryana and Uttar Pradesh under the aegis of various farmers unions have been protesting at the borders of the national capital since November 26 last year to demand repeal of the three farm laws.