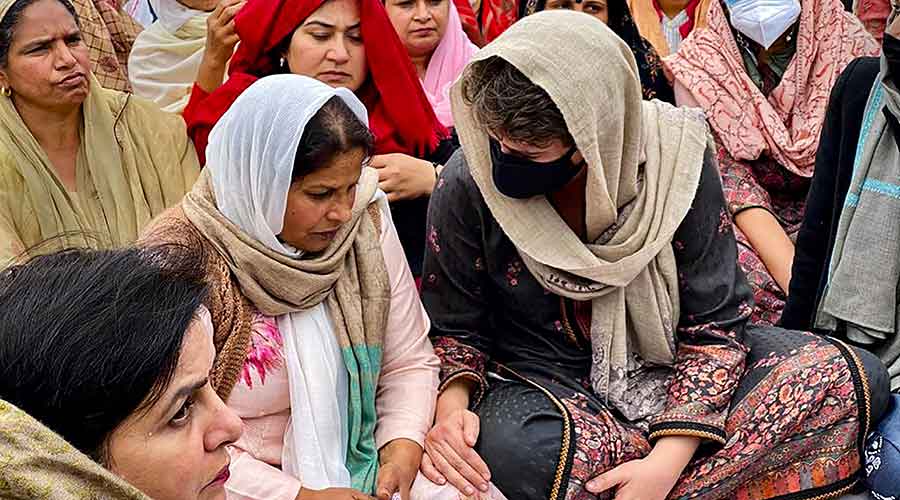 Priyanka, who had lost her father and grandmother to terrorist attacks, empathised with Navreet’s family at their home in Dibdiba village, Rampur district, 225km from Delhi.

“We have gathered here in his memory. I know from my own experience that a martyr’s family cannot forget his sacrifice; they keep that sacrifice in their heart forever,” the Congress general secretary, who had arrived in an SUV, said in an emotional speech in Hindi.

“There is only one wish in their heart that the sacrifice of someone they loved shouldn’t go waste. Navreet was 25 years old, my son is 20.”

Priyanka said Navreet had gone to Delhi to participate in the farmers’ march because he knew they were hurting and wanted to support them.

“An incident happened with him and he didn’t return. Why did he go there? It was not a political conspiracy that he was there. He went there because he was in pain for the farmers. He knew that the farmers were being oppressed,” Priyanka said.

“Guru Gobind Singh had said that doing injustice is a sin but tolerating injustice is a bigger sin. It was with this thought that a youth travelled from Dibdiba to Delhi... hoping he would be heard, that the government would listen to them if all of them gathered there, that it would open its doors to listen to the heartbeat of the farmers. But it didn’t happen.”

Media reports have quoted his family as saying he had bullet wounds.

Priyanka said: “I want to tell Sardar Hardeep Singhji that we will not let the martyrdom of your grandson go waste. This movement will continue till the government repeals the three dark laws.

“I can say the three farm laws are the biggest cruelties. The government doesn’t want to repeal them. They (the government) are also being cruel in describing the martyrs as terrorists, in calling the farmers’ movement a political conspiracy.

“If a leader cannot listen to the woes of the farmers, poor and every citizen of the country, if they (the government) call them names, such a leader is good for nothing.”

Three cars that were part of Priyanka’s convoy had earlier collided on Hapur Road on the way to Rampur but no injuries were reported.

The Congress had put up banners along the highway to welcome Priyanka. At one place, TV cameras captured her cleaning dust off her SUV’s windshield.