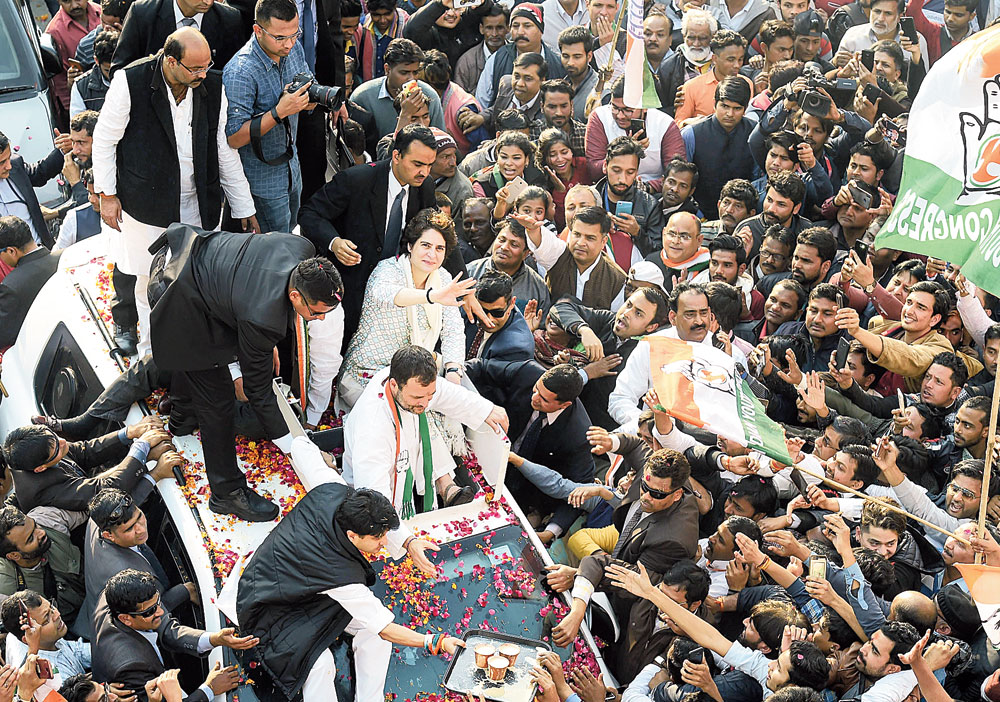 Tumult and tea break: Priyanka Gandhi Vadra greets supporters during the road show in Lucknow on Monday. Rahul Gandhi and Jyotiraditya Scindia can be seen reaching out for a tray with three cups of tea.
(PTI)
Piyush Srivastava   |   Lucknow   |   Published 11.02.19, 10:11 PM

Some stressed her resemblance to Indira Gandhi. Some reckoned her a likelier champion of Ram’s ideals than Prime Minister Narendra Modi would ever be.

The ecstatic crowd response that Priyanka Gandhi Vadra’s six-hour, 22km road show in Lucknow evoked on Monday would have exceeded the dreams of even the most ardent Congress supporter.

“Today I realised that Priyanka can infuse life into the Congress in Uttar Pradesh. She has Indira Gandhi’s grace and kindles hope in us,” said Ajit Kumar, 60, a builder from Alambagh, through which the procession passed in the early afternoon.

At one point, an estimated 2 lakh people had joined the road show, organised to welcome Priyanka as the new general secretary in charge of eastern Uttar Pradesh, while tens of thousands watched from roadsides, balconies and rooftops.

Priyanka was accompanied by Congress president and brother Rahul Gandhi and her western Uttar Pradesh counterpart, Jyotiraditya Scindia, on the roof of a bus for the first 13km and on an open-top SUV for the next 9km. More than 50 Congress cars formed the cavalcade, which crawled from the airport to the state party office.

Hundreds of posters and banners carrying images of Priyanka and grandmother Indira had been plastered along the route.

A smiling Priyanka waved to the crowd, which chanted: “Badlav ki aandhi hai, Rahul, Priyanka Gandhi hai (Rahul and Priyanka are a storm of change).”

“She really looks like Indira Gandhi,” said Sanjay Rai, who had waited two hours near Shaheed Path, barely 1km from the airport, for a glimpse of the Congress’s new star.

“There was a general perception that nobody could challenge (Prime Minister) Narendra Modi in the next general election. But the size of today’s crowd shows the Congress has found an answer to Modi.”

The excitement seemed to be getting the better of Rahul Shukla of Lalbagh. “Rahul and Priyanka will follow the dignity and honesty preached by Lord Ram and dislodge Modi, who has cheated the god by ditching Hindus,” he thundered.

His voice rising with each sentence, Shukla proclaimed: “Team Modi is spreading a rumour that Rahul and Priyanka are non-Hindu. But I want to tell him they are the great-grandchildren of Pandit Jawaharlal Nehru. Do you understand the meaning of Pandit?”

The siblings stepped off the bus once, and the SUV twice, to garland statues of Vallabhbhai Patel, Mahatma Gandhi and Babasaheb Ambedkar.

Before her visit to the state, Priyanka had said in a message: “Come, let’s build a new future, new politics with me. Thank you.”

Congress sources said she did not address the crowds on Monday because the party did not want to shift the political spotlight from Rahul. Speaking on the grounds of the state Congress headquarters, Rahul thanked Lucknow for the warm welcome.

Although many saw the road show as a sign of the Congress’s revival, it is too early to say how prepared the organisational machinery is to capitalise on the goodwill.

Over this week, Priyanka is expected to meet leaders and workers in the state and discuss strategy and candidates.