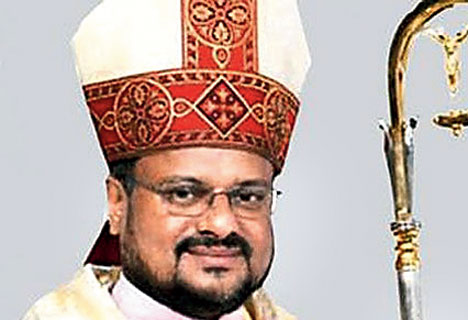 Bangalore: A clergyman who once claimed to have seen evidence that could nail rape-accused Bishop Franco Mulakkal has made a volte-face to deny such knowledge.

Parish priest Nicolas Manipparambil made the turnabout a day before the bishop was scheduled to appear before police in Kerala on Wednesday.

Manipparambil was one of the first officials of the Syro-Malabar Church in whom the nun was said to have confided about Bishop Mulakkal allegedly raping her 13 times between 2014 and 2016.

Two months ago Manipparambil had said: "In view of the available evidence one would have to believe the bishop is guilty. They (the nun and her family) have strong evidence and I have seen one or two (pieces of evidence)."

The priest, who had earlier recorded his statement before the police, expressed an entirely different view on Tuesday.

"As I understand, theydon't have any such evidence. What I said two months ago was based on the lies they made me believe. Otherwise, if they present concrete evidence, Bishop Franco will be arrested the moment he touches down in Kerala on Wednesday," Manipparambil said.

"They had all along claimed they have stored the evidence in 10 pen drives. Since they have not released the contents yet, it means they have no such evidence," he told reporters.

But the nun's colleagues and her sister, who entered the tenth day of their sit-in at Kochi, said Manipparambil had perhaps been misled by "someone".

"I feel someone has influenced the Father. We haven't asked him about his change of mind, but we cannot display the evidence we have before everyone. We have handed them over to those handling the case. We cannot display such evidence before each and everyone," said the nun's sister.

Sister Anupama, one of the five nuns who launched the protest along with the survivor's family members, said the evidence had been handed over to the police. "The Father has been misled to believe that we don't have any evidence," she said.

In a setback to the bishop's efforts to prevent arrest, Kerala High Court on Tuesday posted the hearing of his plea for anticipatory bail to September 25. The window will allow the police to conduct the interrogation without any interruption.

Mulakkal is scheduled to appear before Kerala police on Wednesday for a detailed interrogation. He has been asked to appear before the deputy superintendent of police at Vaikkom, Kottayam district, at 10am. A police team had earlier questioned him in Jalandhar.

In his seven-page bail plea, Mulakkal has said: "The allegations made by the de facto complainant is wholly concocted and cooked up only to wreak vengeance for actions taken by the applicant."

The bishop described the accusations against him as "a fictional story by the de facto complainant," and that "the complaint is an afterthought and part of a vicious programme to bring down the applicant who is holding a very high post in the congregation".

The police had earlier said the interrogation had become necessary to iron out contradictions in the statements recorded by the bishop, the nun and some witnesses.