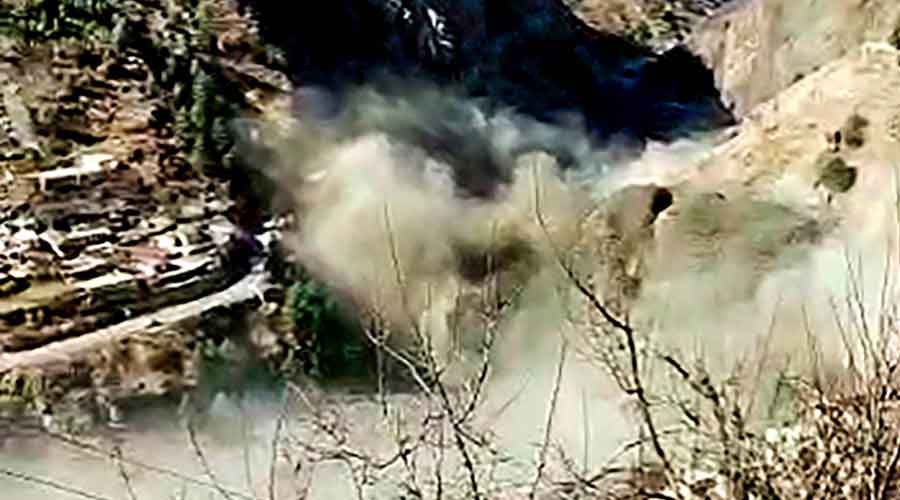 A part of the Nanda Devi glacier broke off at Joshimath in Uttarakhand's Chamoli district on Sunday, leading to a massive flood in the Dhauli Ganga river
PTI
Our Bureau, Agencies   |   New Delhi   |   Published 07.02.21, 06:46 PM

President Ram Nath Kovind on Sunday said he was deeply worried about the massive glacier burst at Joshimath in Uttarakhand's Chamoli district and prayed for the wellbeing and safety of people.

In a tweet, Kovind also said he was confident that rescue and relief operations on ground are progressing well.

"Deeply worried about the glacier burst near Joshimath, Uttarakhand, that caused destruction in the region. Praying for wellbeing and safety of people. Am confident that rescue and relief operations on ground are progressing well," he tweeted.

Vice President M Venkaiah Naidu on Sunday prayed for the safety of those affected.

"I join the nation in praying for the safety of all those affected by the flash flood caused by a glacier burst in Chamoli district of Uttarakhand," the Vice President Secretariat tweeted quoting Naidu.

The vice president said he is sure that the state and central governments are trying their best to mitigate the crisis.

PM Narendra Modi tweeted, "Am constantly monitoring the unfortunate situation in Uttarakhand. India stands with Uttarakhand and the nation prays for everyone's safety there. Have been continuously speaking to senior authorities and getting updates on NDRF deployment, rescue work and relief operations.”

Union Home Minister Amit Shah spoke to Uttarakhand Chief Minister Trivendra Singh Rawat and assured him of all possible support to deal with the situation arising from the glacier burst and the resulting floods.

In a series of tweets in Hindi, Shah also said teams of the NDRF were deployed for rescue and relief operations of the affected people while additional troops of the force were being airlifted from Delhi.

Bengal Chief Minister Mamata Banerjee on Sunday said she was deeply shocked over the disaster.

"Deeply shocked and very saddened at the loss of lives in the disaster that took place in Uttarakhand. My deepest condolences to the families of the deceased. Wishing a speedy and full recovery for those injured in the calamity," she said on Twitter.

Delhi Chief Minister Arvind Kejriwal said his government is ready to extend every possible help to the people of Uttarakhand.

"The news about the disaster in Chamoli is really worrisome. I pray for everybody's safety. The Delhi government is ready to send every possible help to people of Uttarakhand in this difficult time," he tweeted in Hindi.

A part of the Nanda Devi glacier broke off at Joshimath in Uttarakhand's Chamoli district on Sunday, leading to a massive flood in the Dhauli Ganga river and causing large-scale devastation in the upper reaches of the ecologically fragile Himalayas.

Over 150 labourers working at a power project in Tapovan-Reni are feared dead, an Indo Tibetan Border Police (ITBP) spokesperson said while quoting the project-in charge. Three bodies were recovered.