The 35-year-old, along with volunteers, removes tonnes of litter left behind by tourists each year 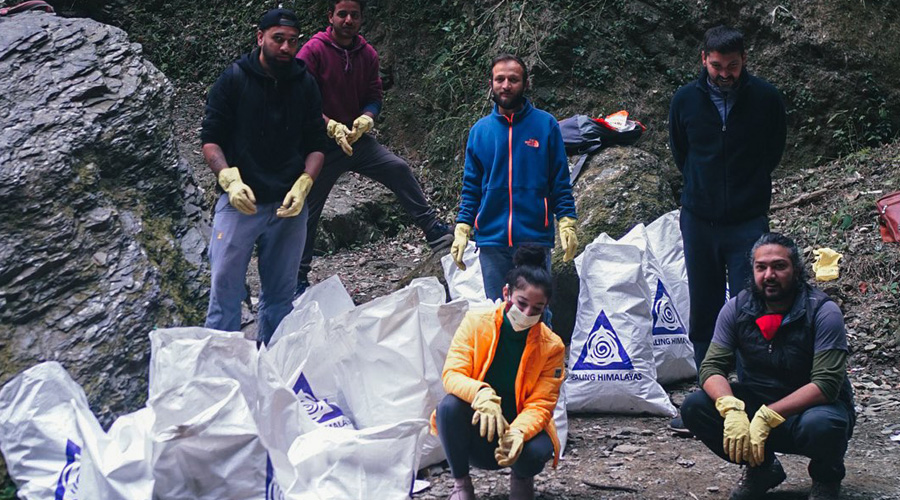 The projects of his 'Healing Himalayas Foundation', which sustains on voluntary donations, are focused on clean-up drives, waste management and other activities in the rural Himalayan region.
Twitter/@iPradeepSangwan
Our Bureau And Agencies   |   Chandigarh   |   Published 27.12.20, 06:01 PM

The 35-year-old who hails from Gurgaon is a mountaineer based in Himachal Pradesh and he established 'Healing Himalayas Foundation' four years ago. Sangwan, along with a team of volunteers, clears tonnes of plastic and other waste left behind by tourists each year.

In his last 'Mann Ki Baat' broadcast of the year, Modi, while talking about new resolves for the New Year, said there are some people who continuously keep doing something new and keep on realising new resolves.

"You must have also felt in your life that when you do something for society then the society itself gives us the energy to do much more. Normal sources of inspiration can accomplish great tasks. One such young man is Pradeep Sangwan," he said.

He said Sangwan is running a campaign called 'Healing Himalayas' since 2016, as part of which he along with his team goes to different areas of Himalayas and clears the garbage left behind by tourists.

"Till now, Pradeep has cleared tonnes of plastic waste from different locations of Himalayas," Modi said while praising Sangwan's initiative.

Sangwan later told PTI, "It is very inspiring that Prime Minister acknowledges small efforts by people like me. I thank him for bringing the work, which we are doing for the sake of protecting our environment, to national attention. It will definitely act as a big motivation."

Sharing details of how he launched his campaign, Sangwan said his father was in the Army and also wanted him to become an officer in the defence forces. However, destiny took a different course when he could not clear the interview to join the Army.

While doing his graduation from Chandigarh's DAV College, he came into contact with some friends from Himachal Pradesh with whom he started to explore the Himalayas in 2007-08.

"I moved to Himachal in 2009, where for the next five years I undertook extensive travelling, treks etc. I met a group of people from 'gaddi' (shepherd) community in Lahaul when we were doing on such trek from Chandra Taal lake to Suraj Tal lake," he said.

Sangwan said that he along with a friend spent 3-4 days with the members of this community and he was very impressed by how, even in a very remote area, they cared so much for their environment.

He said the projects of his foundation, which sustains on voluntary donations, are focused on clean-up drives, waste management and other activities in the rural Himalayan region.

Each year in December, Sangwan says that he designs a calendar for the following year where volunteers can align their trips accordingly.

"While going up for a trek, we collect all the trash. Mainly we find plastic bottles, multilayer packaging plastic waste, and then we store it at one location on the route. While coming back we bring it back to the base village and transport it to the nearest facility. In the process, we engage mainly our volunteers," he said.

"I recall that during a trek to Kheer Ganga in Kullu district in two days we got 10,000 plastic PET bottles.

"Another sad thing we came across is that many people after drinking dispose of beer and other glass bottles in a reckless manner or break them. We also come across cases where cows were unable to move because a piece of glass got stuck in their hoof leaving them in great pain," he said.

Sangwan stressed on working at the community level for better results in waste management in the Himalayan region. "My focus remains on the Himalayan rural region. We mainly work in the districts of Kullu, Shimla, Mandi and Kinnaur," he said.

His foundation has now set up a first waste collection unit, which will be operational soon, in a village called Rakcham near Chitkul in Kullu district, while the second one will come up near Kheer Ganga base camp. Third and the fourth one will come up in Lahaul where Atal tunnel has come up, which is witnessing a lot of tourist activity.

He said that in his campaign social media has acted as a powerful tool and more and even film stars like Randeep Hooda, who is from Haryana, have supported and appreciated his cause.

Today our Prime Minister shared about the work we do to preserve Himalayas in Mann ki Baat. I am extremely humbled and honoured, it’s only possible because of your contribution, participation and love.