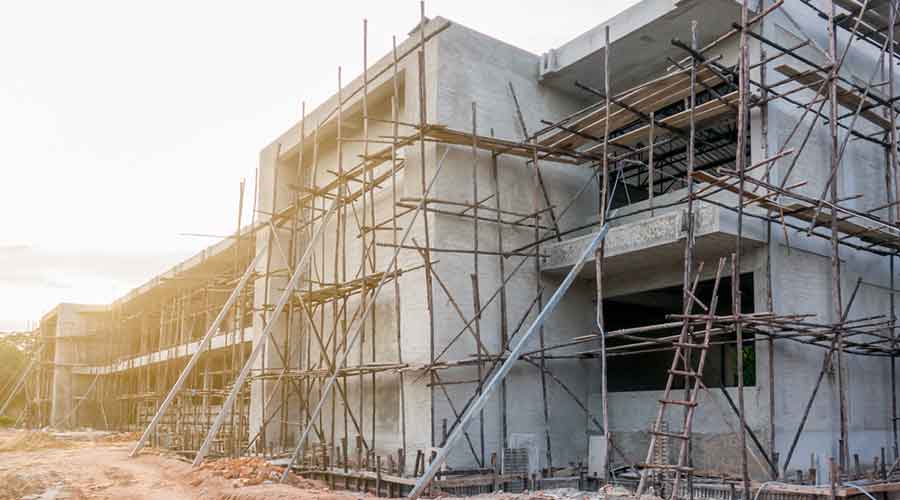 Asking the commission on pollution and NCR states -- Delhi, Uttar Pradesh, Haryana, Punjab and Rajasthan -- to continue with their measures to curb the spike in pollution, the bench reversed the decision to allow construction activities from November 22 in view of improved ground situation in air pollution level.
File picture
Our Bureau, PTI   |   New Delhi   |   Published 25.11.21, 12:51 PM

Taking note of worsening air quality, the Supreme Court has re-imposed the ban on construction activities in Delhi and national capital region (NCR) and directed the states to provide subsistence to workers from the funds collected as labour cess for the period during which such activities are prohibited.

A special bench headed by Chief Justice N V Ramana, in an interim order uploaded Wednesday night, also directed the Commission for Air Quality Management in the NCR and Adjoining Areas to "commission a scientific study of air quality based on available data of previous years bearing upon recorded levels of air pollution".

"We direct that instead of waiting for the air quality to deteriorate before initiating action under the graded response plan, necessary measures must be put into place in anticipation of a deterioration of air quality. For this purpose, it is necessary for the commission to engage expert agencies with domain knowledge in meteorological data and statistical modelling," said the bench which also comprised justices D Y Chandrachud and Surya Kant.

Asking the commission on pollution and NCR states -- Delhi, Uttar Pradesh, Haryana, Punjab and Rajasthan -- to continue with their measures to curb the spike in pollution, the bench reversed the decision to allow construction activities from November 22 in view of improved ground situation in air pollution level.

"In the meantime, as an interim measure and until further orders, we re-impose the ban on construction activities in the NCR subject to the following two conditions: Non-polluting activities relating to construction such as plumbing work, interior decoration, electrical work and carpentry are allowed to be continued.

"The states shall use the funds which have been collected as labour cess for the welfare of construction workers to provide them subsistence for the period during which construction activities are prohibited and pay wages notified under the Minimum Wages Act for the respective categories of workers, the order said.

The order took note of the submissions of solicitor general Tushar Mehta, appearing for the Centre, that a plan for graded response has been prepared in pursuance of which measures are identified to be taken progressively on the basis of worsening levels of ambient air pollution.

The bench said as of now, the action is proposed after air quality has deteriorated and directed the commission to take preventive advance measures to deal with the rise in the air pollution.

Asking the panel to undertake a study, the order said such a study "must factor in seasonal variations and other relevant parameters".

"Once a scientific model is available, which factors in wind velocity as well as natural and man-made phenomena, the graded response plan can be modulated to provide for measures being taken in advance, based on anticipated changes in air quality without waiting for the air quality to deteriorate.

"On this basis, steps can be planned at least a week in advance and even earlier, based on anticipated levels of air pollution in the foreseeable future. The Commission shall carry out the above exercise within a month and report the steps taken for compliance with this direction," it said.

The apex court, which fixed the plea for hearing November 29, directed that in the meantime, the central government, Delhi-NCR states and the commission to take appropriate steps to deal with the situation.

Asking why Delhiites should suffer very poor air quality, the bench on Wednesday called for advance preventive steps to deal with the situation before it becomes severe, observing that any dip in pollution is because of the wind, an "act of God", which too may come to zero by the end of the day.

The court also wondered what signal the country was sending to the world when the national capital was hit by air pollution, and told the Centre and the National Capital Region(NCR) states to continue with their measures to curb air pollution.

The order has been passed in a plea filed by Aditya Dubey seeking urgent steps to improve the air quality of Delhi-NCR.