Cheetahs are our guests; we should give them a few months to make Kuno national park their home, says Modi 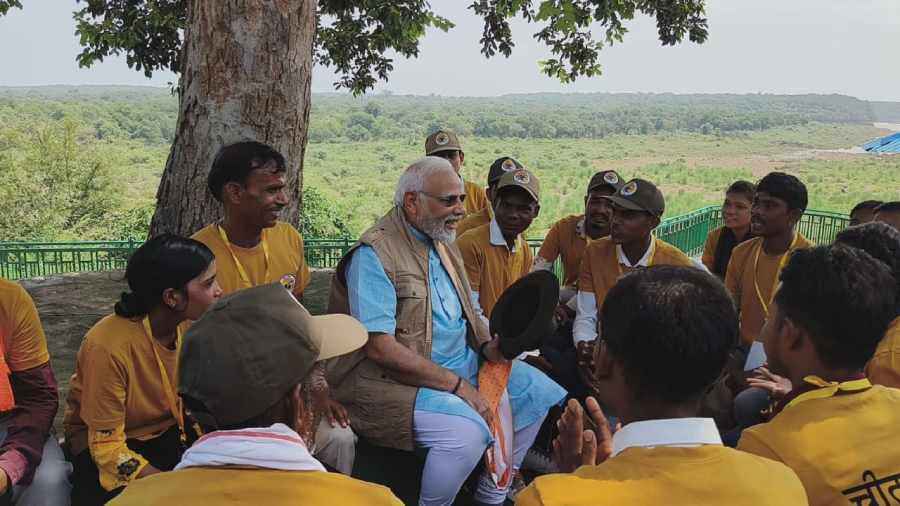 Prime Minister Narendra Modi on Saturday released cheetahs brought from Namibia into a special enclosure at the Kuno National Park (KNP) in Madhya Pradesh as part of the programme to reintroduce the feline in India seven decades after it was declared extinct in the country.

Modi, who is celebrating his 72nd birthday on Saturday, also clicked some photographs of these spotted animals on a professional camera after releasing them into the enclosure.

A total of eight cheetahs - five females and three males - were brought to Gwalior from Namibia in a modified Boeing aircraft on Saturday morning as part of 'Project Cheetah', the world's first inter-continental large wild carnivore translocation project. From Gwalior, where the plane reached shortly before 8 am, the spotted animals were flown to Palpur near the KNP, located in Sheopur district, in two Indian Air Force (IAF) helicopters.

At the national park, a dais was set up, under which special cages carrying cheetahs were kept. PM Modi released three of these felines around 11.30 am by operating a lever of the cages.

Wearing a pale blue kurta, light brown jacket, a pair of sunglasses and donning a dark brown hat, the prime minister also clicked photographs of the cheetahs on a DSLR camera following their release. These animals are radio-collared.

KNP Divisional Forest Officer P K Verma told PTI that the prime minister released three cheetahs in an enclosure, while the rest five were released by other dignitaries.

The KNP is situated on the northern side of Vidhyachal mountains with an area of 344.686 sq km. It was named after a tributary of Chambal River, Kuno.

The last cheetah died in the country in 1947 in Korea district in present day Chhattisgarh, which was earlier part of Madhya Pradesh, and the species was declared extinct from India in 1952.

The 'African Cheetah Introduction Project in India' was conceived in 2009. A plan to introduce the big cat in the KNP by November last year had suffered a setback due to the Covid -19 pandemic.

Cheetahs are our guests: PM Modi