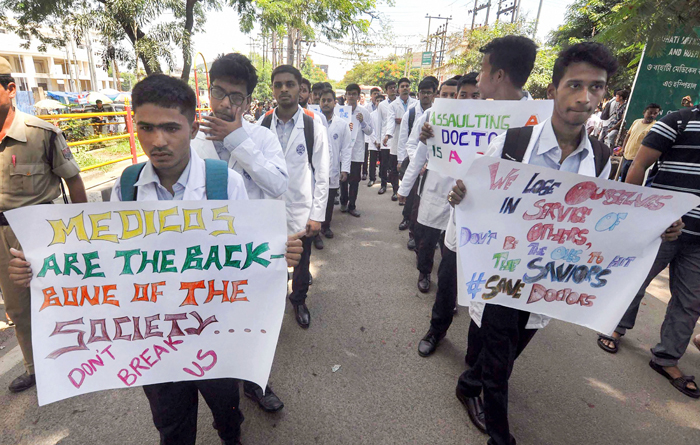 The Supreme Court on Friday asked the Centre to respond to a plea seeking a directive to take immediate and necessary action against people who indulge in violence against medical professionals, including doctors, and clinical establishments.

The plea, which has also sought a directive to the government to enact a law to create a separate offence for violence against medical professionals and damage to clinical establishments, had come up for hearing before a bench of Justices N.V. Ramana and Ajay Rastogi.

The bench issued notices to the Centre and the health and family welfare and asked them to file their responses on the plea.

The plea, filed by the Association of Healthcare Providers (India) Tamil Nadu chapter and Dr B. Kannan, has referred to an ongoing study by the Indian Medical Association and said more than 75 per cent doctors across the country have faced some form of violence.

“The petitioners further submit that as per recent data, there is only one government allopathic doctor for every 10,189 people, one government hospital bed for every 2,046 people and one state-run

hospital for every 90,343 people. India has only 10 lakh doctors working in government and private sectors,” the plea said.

It said “innumerable incidents” of violence against doctors are being reported across the country and even the premier All India Institute of Medical Sciences, New Delhi, is not spared. “However, since no positive action was taken by the local police, the medical fraternity which has become a soft target for hooligans, has been demoralised,” the plea said.

It added: “Unless such attacks are checked, it can have serious repercussions on patient care.”

The petition said the meagre government spending on healthcare had resulted in poor infrastructure and human resource crunch in government hospitals in India and only 1.3 per cent of GDP is directed towards healthcare in the country.

“As per the Universal Health Coverage NHP (National Health Policy) 2017, four per cent of GDP should be allocated for health,” it said.

According to the World Health Organisation, it said, the doctor-to-patient ratio should be 1:1000, which means that India needs another 5 lakh doctors to bridge the gap.

The plea said the Prevention of Violence Against Medicare Persons and Institutions Acts have been notified in 19 states in the past 10 years but the legislation has failed to address the issue.

It said even though vandalism and violence in hospitals or clinics is a criminal offence and some of the states have enacted legislation for this, not even 10 per cent of the cases registered against the culprits reached the courts after filing of a charge sheet.

“The petitioners further submit that this is one of the main reasons why the doctors are reluctant to serve in rural areas. The petitioners submit that violence against doctors is unacceptable and needs to be condemned,” the plea said.

“The petitioners submit that small and medium private health care establishments, which provide the bulk of health care services, are isolated, disorganised and vulnerable to violence,” it said.