Photos of Unnao’s Sengar, Modi and Shah feature in advertisement 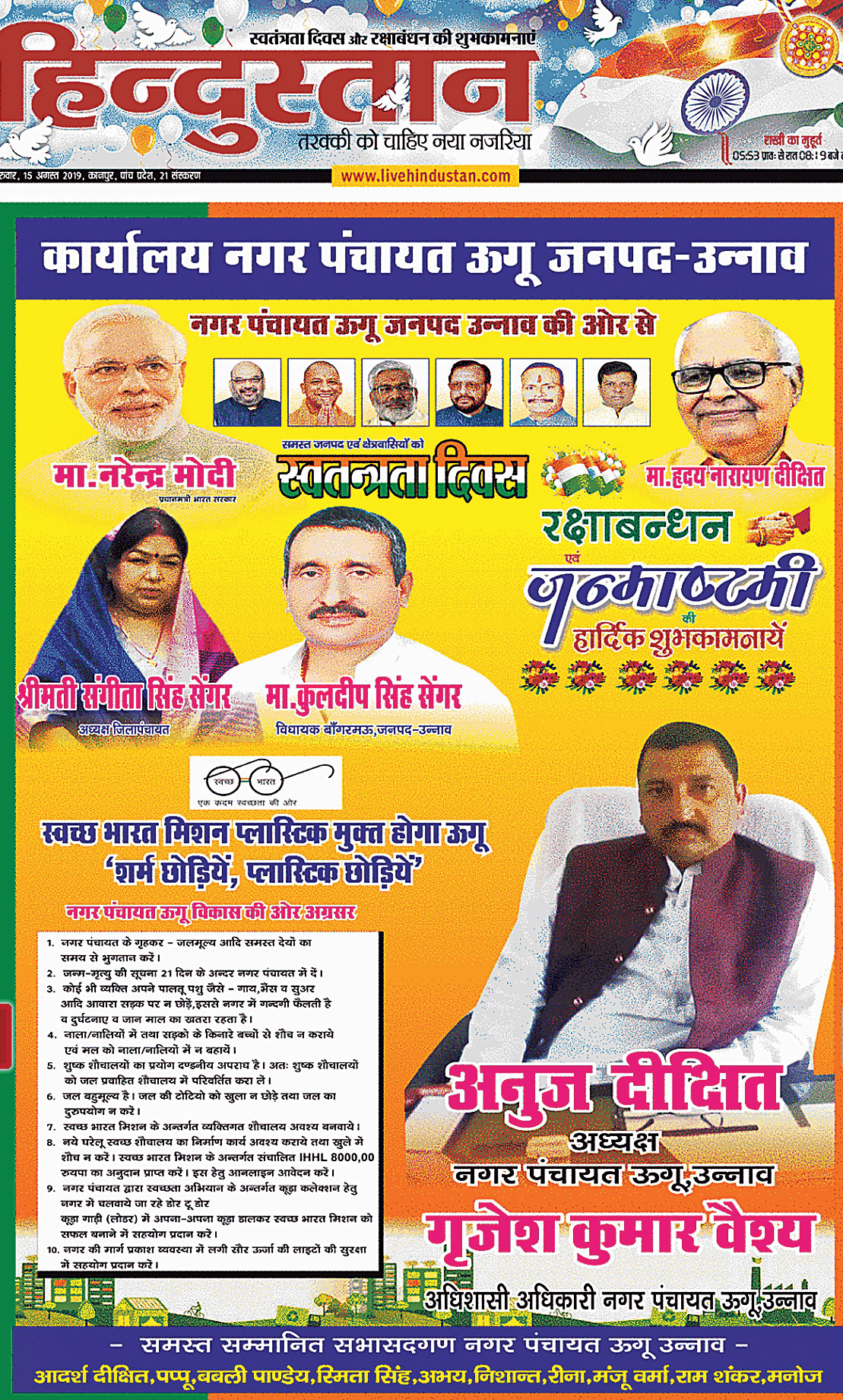 An advertisement that appeared in some Hindi newspapers in Unnao on Independence Day, featuring the pictures of Sengar, Modi and Shah among others
(Sourced by Correspondent)
Our Special Correspondent   |   Lucknow   |   Published 17.08.19, 09:04 PM

The Central Bureau of Investigation has framed rape and murder charges against Kuldeep Singh Sengar but the lawmaker from Unnao has still found a place on an advertisement the ruling BJP in Uttar Pradesh brought out on Thursday in local Hindi newspapers.

The advertisement, on the occasion of Independence Day and Raksha Bandhan, featured the jailed MLA from Bangermau along with Prime Minister Narendra Modi, party national president Amit Shah, chief minister Yogi Adityanath and others.

The BJP has expelled Sengar but the state party leadership has not yet written to Assembly Speaker Hriday Narayan Dixit to disqualify the MLA.

A senior BJP leader on Saturday told The Telegraph in Lucknow the party “wouldn’t desert Sengar till he is pronounced guilty”.

“He is a popular leader of the Thakur (Rajput) caste and (has been) very efficient in mobilising his caste men during elections. Maybe he is only an MLA but he helped us win the Unnao and Kanpur Lok Sabha seats. We will discard Sengar when the court gives a verdict against him,” the leader, a minister in the Adityanath government, said.

If Sengar is convicted, he would be automatically disqualified as an MLA.

Sengar and his brother Atul Singh are in jail on the charge of gang-raping a minor girl in June 2017 and conspiring to kill the victim’s father in Unnao prison after framing him in a false case under the Arms Act in April 2018.

With a dozen grievous injuries on his body, the victim’s father had died of septicaemia in jail.

While in jail, Sengar was booked last month for conspiring to kill his victim when she was returning to her village in Unnao from Rae Bareli. The lawmaker’s second brother, Manoj Singh, is a co-accused in the case in which a truck had rammed into the victim’s car, killing two of her aunts.

Critically injured in the accident, she and her lawyer are under treatment at the All India Institute of Medical Sciences, New Delhi.

Sengar was suspended and later expelled from the party after the July 28 road accident, which the CBI has noted in its records as “deliberate”.

Anuj Kumar Dixit, Unnao’s Ugu nagar panchayat chairman who had released the advertisement, justified the decision to feature Sengar during a conversation with reporters, saying Sengar was still an MLA.

“We must put up his pictures in advertisements of the area till he is our MLA. There is nothing wrong in it,” Dixit said, confirming that the payment for the space in the newspapers would be made from the state government’s fund.

Sakshi Maharaj, Unnao MP, who had met Sengar in jail to thank him after his victory in the Lok Sabha elections, also expressed his sympathy for the MLA.

“Media trial against the MLA is wrong,” the MP said on Friday. “His crime is yet to be proved.”