Omar and Farooq have been in detention since August 5 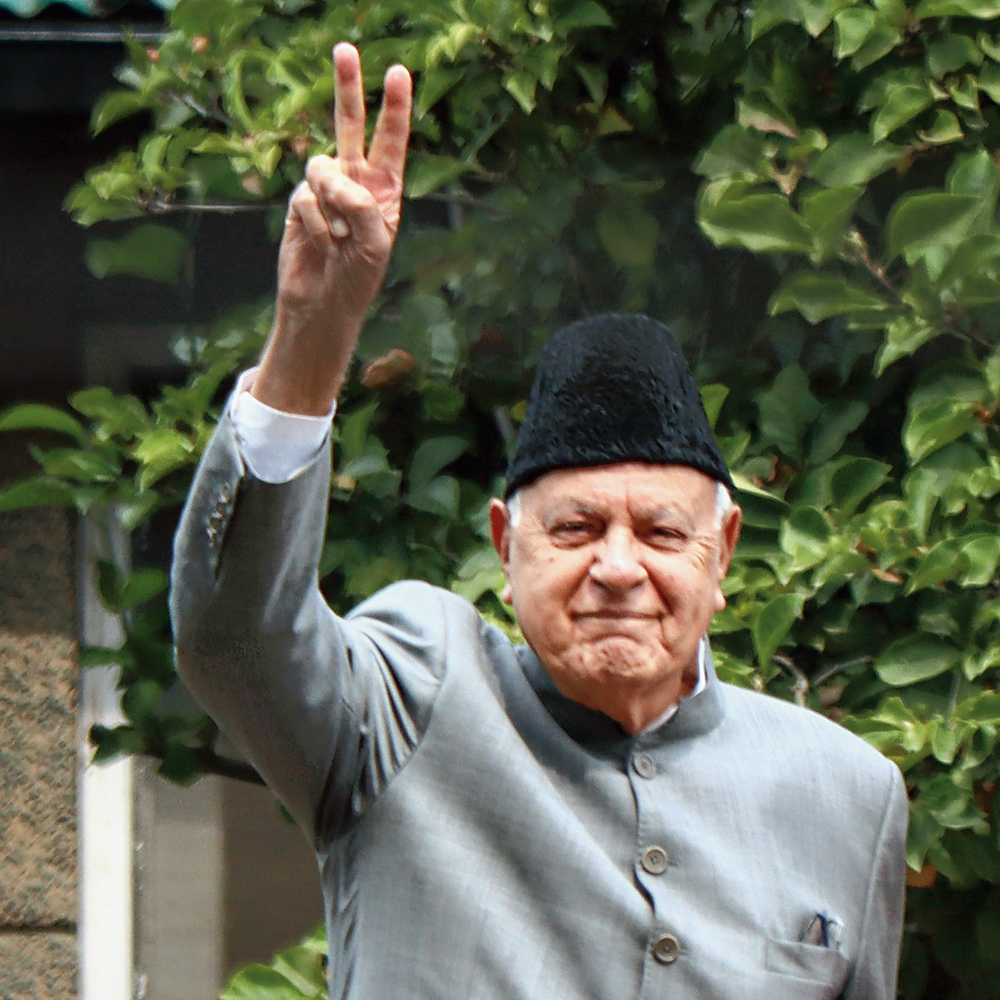 Detained former chief ministers Omar Abdullah and Farooq Abdullah were on Sunday caught on camera in a rare occurrence, both displaying resolve and sangfroid as the son clicked selfies with visiting MPs and the father flashed a victory sign.

The images — Omar’s first in the 62 days since the August 5 lockdown and Farooq’s second — came as the government in a surprise move allowed, of its own accord, a group of National Conference politicians to meet their detained bosses. During the clampdown, meetings with any political leaders had so far happened only on court directions.

Omar and Farooq have been in detention since the Centre scrapped Jammu and Kashmir’s special status on August 5. Farooq had once been glimpsed before when he slipped out of his home in the early days of the lockdown.

Omar, 49, lodged in the Hari Nivas guesthouse that has been converted into a sub-jail, looked older than his years, having grown a grey beard. Farooq, 83, was clean-shaven and looked young like always.

Abdullah Sr was under a sort of unofficial house arrest at the beginning, before being formally detained under the Public Safety Act at his home, which too has been converted into a sub-jail.

A brief video shows Omar at the guesthouse, seeing off the two MPs from his party, Justice (retd) Hasnain Masoodi and Mohammad Akbar Lone, after clicking selfies with them. He is in a blue jacket and formal trousers.

Omar also met a 15-member National Conference delegation from Jammu, a day after the governor’s administration allowed them to travel to Srinagar and meet their detained leadership.

Several Jammu-based leaders of the various political parties had been freed from detention a few days ago. Among those who met Omar were National Conference provincial president Devender Singh Rana, brother of BJP leader and minister of state in the Prime Minister’s Office, Jitendra Singh.

The delegation later met Farooq, National Conference president and Srinagar MP, who was wearing a black karakul (the traditional Kashmiri cap) and a bandhgala suit.

Rana said both Farooq and Omar were doing well. “They are in good spirits but sad about the lockdown.”

The National Conference has disappointed the governor’s administration by declaring it will not contest the Block Development Council polls. The government has gambled by releasing its Jammu-based leaders, hoping they would convince the party brass to join the poll fray.

Rana said that if the political process had to start, the jailed leaders must be released.

“Let them be released, then the party working committee will meet. We will discuss and formulate a strategy,” Rana said.

Several Opposition parties, including the Congress, have accused the government of hastening the elections to enable the BJP to grab these bodies. The Telegraph had reported how the government had tweaked panchayat laws, divesting the state’s chief electoral officer of the power to decide the elections’ timing.