Question Hour, where oral explanations are sought, has been suspended for the session 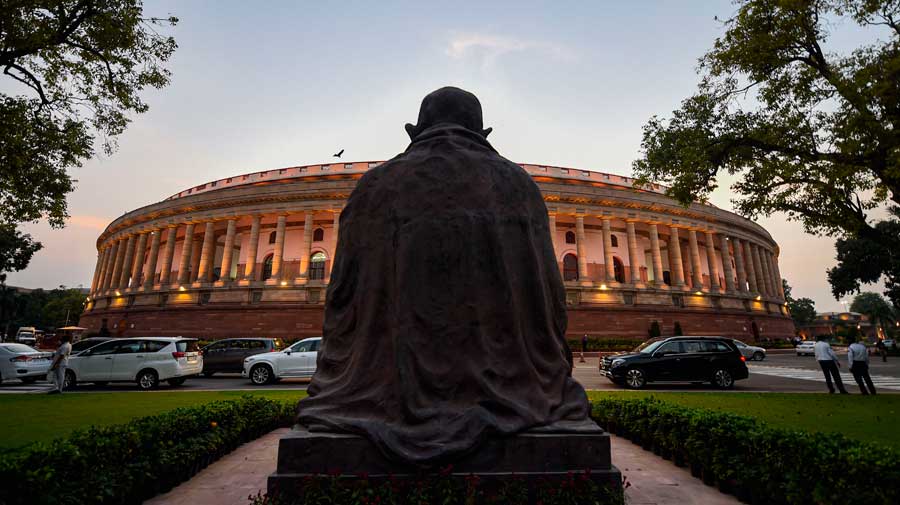 Q: Did thousands of migrant labourers die during the lockdown?
A: No such data is available.

Q: Was any compensation given to the families of migrant workers who had died while returning home during the lockdown?
A: Question does not arise because no data of people dying on the way is kept.

A cloud of obfuscation, if not nonchalance, hung over Parliament as it reopened on Monday with the government meeting members’ questions with evasive written answers.

Such stonewalling is possible in written answers as there is no grilling afterwards. Question Hour, where oral explanations are sought, has been suspended for the session.

As expected, the government on Monday got a motion adopted in the Lok Sabha to do away with Question Hour and Private Members’ business during the current monsoon session, citing extraordinary circumstances because of Covid-19.

The motion was adopted by a voice vote, rejecting the Opposition demand for a division or vote.

Parliamentarians in Rajya Sabha on the opening day of monsoon session of Parliament in New Delhi on Monday.
PTI

A sample of the questions asked and the written “answers” provided:

Question: “Whether the government has failed in assessment of problems faced by the migrant labourers during the lockdown imposed by the government during Covid-19 pandemic.”
Answer: “India, as a nation, has responded through the central government, state governments, local bodies, self-help groups, resident welfare associations, medical health professionals, sanitation workers as well as a large number of genuine and bona fide non-government organisations in the nation’s fight against the unprecedented human crisis due to the outbreak of Covid-19 and countrywide lockdown.”

The question was asked by BJP member Sangeeta Singhdeo and five other MPs from various parties, and the written answer came from labour minister Santosh Gangwar.

Whether thousands of migrants had died (paraphrased at the beginning of this report) was the second part of the question while several Opposition members had asked about the compensation.

The answers made it clear that no such data were collected when the largest movement of people since the Partition unfolded in several states in the country after the lockdown was announced at short notice in March.

Gangwar conceded that the government had kept no records of the job losses among the migrant workers.

The government, however, furnished data for the first time saying that over 1.04 crore (10,466,152) migrant workers had returned home during the lockdown period.

A question from Assam-based Congress member Pradyut Bordoloi, a former BJP politician, asking whether the economic stimulus of Rs 20 lakh crore was actually pumped into the economy and seeking the details if it had been, was met with waffle.

Minister of state for finance Anurag Thakur replied: “The government has announced a special economic and comprehensive package of Rs 20 lakh crore — equivalent to 10 per cent of India's GDP — to combat the impact of the Covid-19 pandemic in India. The package includes, among others, relief measures under the Pradhan Mantri Garib Kalyan Rojgar Abhiyaan, relief measures for MSMEs and NBFCs, increased allocation under MGNREGS, interest subvention for Mudra loans and revamp of Viability Gap Funding scheme for social infrastructure. The implementation of the package is reviewed and monitored regularly.”

Security personnel outside Parliament on the opening day of the monsoon session on Monday.
Prem Singh

The government asserted that it was not running away from questions.

Indeed, it answered dozens of questions, although it left the members no wiser on the subjects of their query.

Bordoloi also asked: “Whether there has been any tangible improvement in the investment cycle of India due to the sharp reduction of corporate tax rate as announced in September 2019?”

Thakur’s answer: “The government, in its endeavour to make India a globally competitive and favoured destination for investment, reduced the corporate tax rate for new companies in the manufacturing sector to 15 per cent and to 22 per cent for existing companies in September, 2019. This has enabled the corporate tax rates in India to be amongst the lowest in the world. Given that investment decisions have a long-term perspective, the impact of this landmark reform would be felt in coming years.”

The government clearly doesn’t want to accept that the proposal, criticised widely by the Congress and former finance ministers, has drawn a blank.

Asaduddin Owaisi’s question — whether the labour force in the unorganised sector has been hit the worst by the lockdown — received this answer: “In order to mitigate the financial crisis of the migrant workers and protect them against the economic disruptions due to the outbreak of Covid-19 pandemic and countrywide lockdown the central government has taken numerous measures to provide them financial assistance, food packages ration and other benefits.”

When Trinamul’s Saugata Roy sought the state-wise and sector-wise number of job opportunities lost to Covid-19 in the country, the labour minister’s answer was: “The global spread of the coronavirus followed by lockdowns has affected global economies including India. Government is taking several steps to ensure that the country is well prepared to face the challenges and threats posed by Covid-19. Aatmanirbhar Bharat, which focuses on economy, infrastructure, system, vibrant demography and demand to create jobs for the youth has also been launched.”

Members from various parties asked a large number of questions about the migrant workers and their struggles during the lockdown but failed to extract much information from the government.

About the measures taken to help the poor and those who lost their jobs, the stock reply was: the government had announced a Rs 1.7-lakh-crore relief package under the Pradhan Mantri Garib Kalyan Yojana.

One of the answers said: “Insurance cover of Rs 50 lakh per health worker fighting Covid-19. Around 80 crore people are being provided additional 5kg wheat or rice and 1kg of preferred pulses, free of cost every month till November, 2020 to all the beneficiaries under provisions of National Food Security Act. 20.65 crore women Jan Dhan account holder has (sic) been given cash assistance of Rs 500 per month per person for three months. Eight crore poor families registered under the scheme of Ujjwala will get one gas cylinder, per family per month free of cost for the next three months.”