Land holder says they wanted to bury the cow carcasses found in their field, but were prevented by 'outsiders' 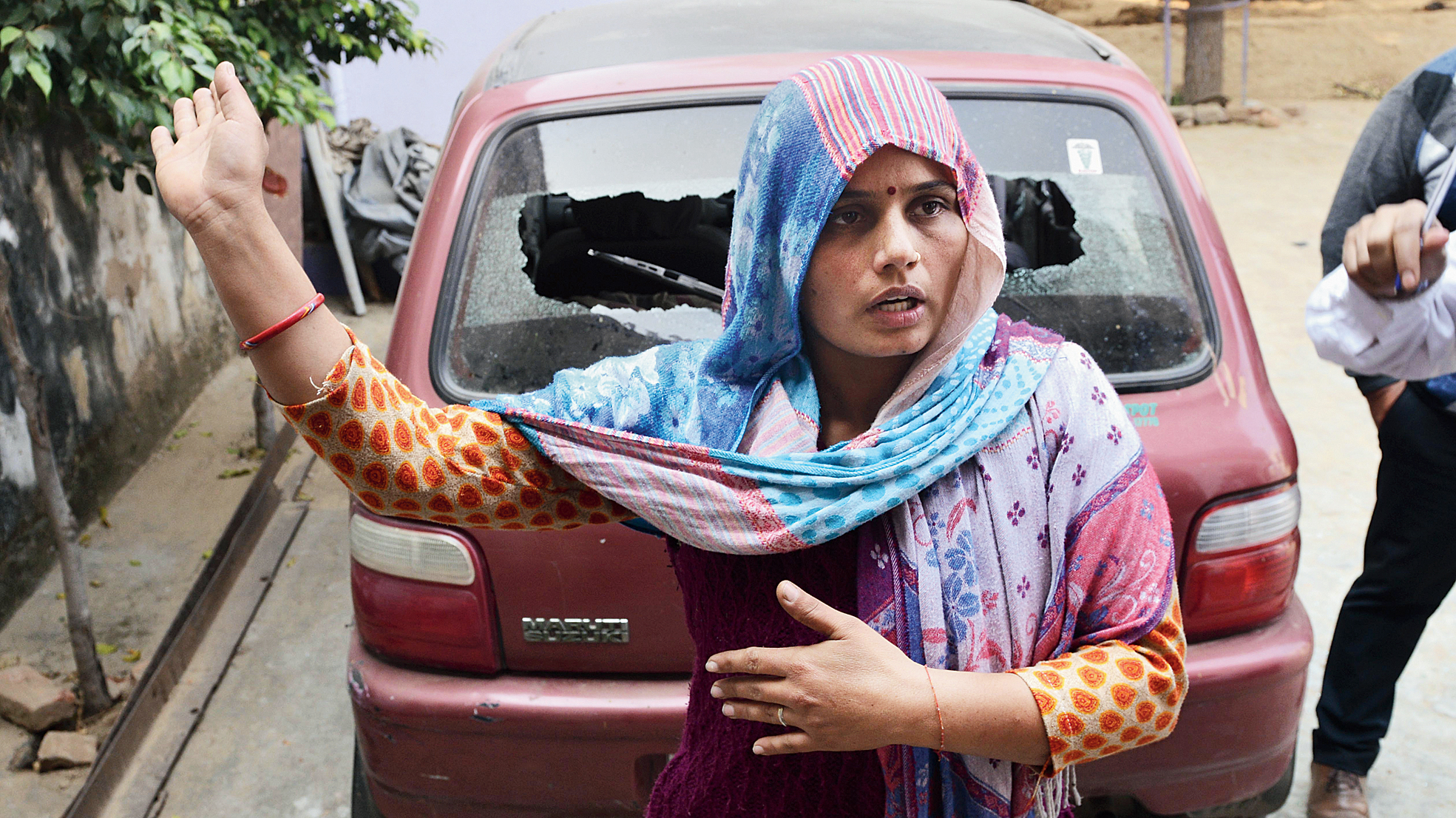 Preeti, the wife of Raj Kumar Chowdhury, in whose field the cow carcasses were found, at Mahav village in Bulandshahr on Tuesday.
Picture by Prem Singh
Imran Ahmed Siddiqui   |   Bulandshahr   |   Published 04.12.18, 09:51 PM

The family in whose field cow carcasses were found in Bulandshahr have said they had decided to bury them right away but “outsiders did not allow us to do so”.

The disclosure lends credence to suggestions, based on preliminary investigations by police and multiple eyewitness accounts, that a deliberate conspiracy was hatched to inflame passions that led to the murder of a police officer who had initially probed the Mohammed Akhlaque lynching case.

All fingers are pointing at the usual suspects: organisations associated with the Sangh parivar.

An undergraduate student who was not among the protesters was also killed in the violence on Monday in the western Uttar Pradesh district, police said.

Preeti, the wife of Raj Kumar Chowdhury in whose field the cow carcasses were found on Monday, said her husband and neighbours had initially decided to bury the carcasses to avoid trouble, but the crowd decided to take the bodies to a police outpost.

“My husband got a call from an unknown number at 7 am saying 25 cows had been slaughtered in our field and the carcasses were lying there. He rushed to the field and was shocked to see the carcasses and some cow heads hanging from ropes that were not there earlier. Within half an hour a large mob gathered from nowhere,” she said.

“He returned home and told us about it. We decided to bury the carcasses, but the outsiders did not allow us to do so. Rather, they took the carcasses away,” Preeti said. Her husband is on the run fearing arrest.

Several police officers are pinning the blame on the Bajrang Dal and the Vishwa Hindu Parishad.

Speaking to The Telegraph, a senior Uttar Pradesh police officer claimed that the prime accused, Bajrang Dal district convener Yogesh Raj, and members of the VHP and the Hindu Yuva Vahini had spearheaded the violence that was stoked by rumours of cow slaughter.

“The preliminary probe has revealed that activists of the Bajrang Dal and the VHP were behind the violence. Bajrang Dal leader Yogesh’s name appears in the two FIRs registered in connection with the violence on Monday. He is the complainant alleging cow slaughter and also the prime accused for inciting violence leading to the murder of the inspector,” said the officer, who is part of the special investigation team constituted to probe the incident.

Yogesh had named seven Muslims, including two minors, in the complaint.

The location and timing of the violence, the SIT officer said, reinforce the initial findings that the violence was well planned to inflame communal passions as hundreds of Muslims had congregated in Bulandshahr for a three-day religious gathering called Ijtema that ended on Monday.

“Those who attended the congregation were supposed to take the Bulandshahr-Gurhmukteshwar state highway to return to their respective states en route Delhi. The motive was to attack Muslims returning from the Ijtema in the name of cow slaughter and stoke communal violence,” the officer said.

Others said Yogesh and 50 others, mostly outsiders, had reached the village on Monday morning as soon as rumours of cow slaughter spread. “They came in cars full of weapons and sticks and asked us to carry the carcasses in a tractor to a police outpost,” said Manohar Singh, a villager.

Policemen led by inspector Subodh Kumar Singh reached the village and requested the residents to calm down.

“The inspector then appealed to the crowd with folded hands to return home after registering a complaint of cow slaughter. But they did not budge as they had come prepared with a sinister plan,” said Mahesh Chand, a constable who was present with Subodh.

“But the crowd led by Yogesh started protesting and incited the villagers to take the carcasses to the police outpost. We had never before seen the people who were part of the mob and accompanied Yogesh,” Manohar said.

Nearly 50-60 men in tractors reached the police outpost at 10 am on Monday and the crowd swelled. Within half an hour, the number grew to 500 and the crowd started hurling stones at the policemen.

The investigation has also revealed that the inspector was shot by a police weapon, likely his own pistol that was snatched by the crowd. The police had used lathis to disperse the violent crowd and tried to clear the blockade.

Subodh was attacked again while being taken to hospital and succumbed before he could be treated. A video clip recorded by some protesters showed the inspector’s body lying in a Tata Sumo. The protesters torched police vehicles and parts of the police outpost.

Ram Ashray, who was driving the inspector’s vehicle, said Subodh could have been saved had he reached the hospital on time.

A bystander, identified as Sumit, died of a bullet injury as the police and the crowd exchanged fire. Sumit, an undergraduate student, was not part of the protest, the police said.