On launch-spree, Modi woos Bihar with ‘powerhouse of talent’ speech 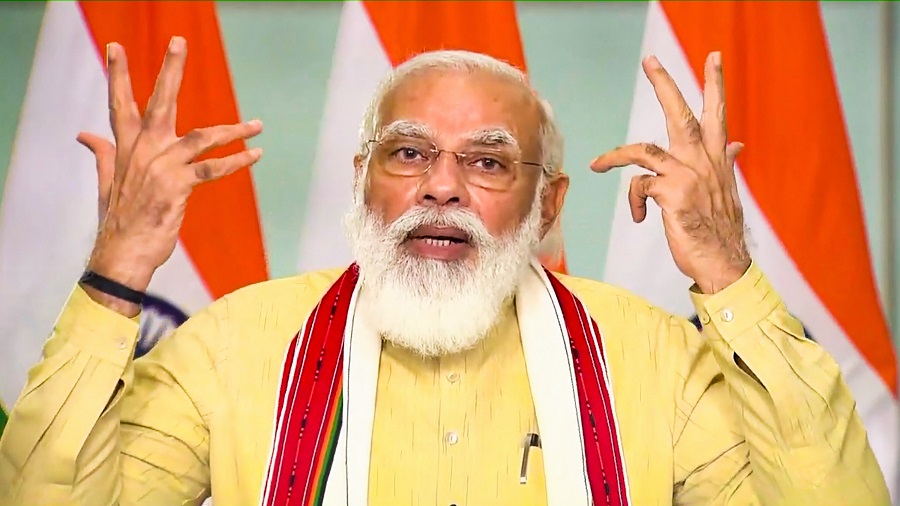 Prime Minister Narendra Modi on Sunday inaugurated three petroleum sector projects, gave a big thumbs up to chief minister Nitish Kumar, and reached out to voters, calling Bihar a "powerhouse of talent" in the run up to Assembly elections in the state.

Modi's praise of alliance partner Kumar came weeks ahead of the elections that are likely in October-November, as he dedicated three petroleum projects worth nearly Rs 900 crore to the people. These included a gas pipeline that extended from Durgapur in West Bengal to Banka in Bihar.

Banka was also the beneficiary of an LPG bottling plant while another such unit is located at Harsiddhi in East Champaran district.

“I had the opportunity of flagging off the work on extension of the gas pipeline a year-and-half ago. I am delighted to see its completion. The country and Bihar have come out of an era when a project was announced and a generation had to wait for its completion. Nitish ji has played an important role in ushering in this change in the state,” Modi said.

The Prime Minister began his speech with a few sentences in Angika, the dialect spoken in Banka and adjoining districts.

He marvelled at the gas pipeline project which was “no mean feat" as it involved working across a stretch of nearly 200 km of difficult terrain dotted with many rivers, dense forests and hills.

“I would like to use the terms gas-based industry and petro-connectivity, which may sound very technical but actually impact the lives of the common people,” he said, addressing the function virtually from the national capital.

“Just imagine what would have been the situation if people were to keep venturing out in search of wood and other fuel for cooking their meals. The need is no longer there thanks to schemes like the Ujjwala Yojana which has ensured that LPG reaches households of the poorest of the poor," he said while talking about the coronavirus outbreak.

The Prime Minister recalled how people would queue up in front of residences of MPs for a cooking gas connection from their quota. "There was a time when having an LPG connection was a luxury not many could afford," he said.

Launching a veiled attack on RJD chief Lalu Prasad, who he did not mention by name, Modi said Bihar has come out of an era when rail, road and internet connectivity were made light of and people used to say of what use roads are for those who walk on their feet.

He said Bihar, like the rest of eastern India, never lacked “samarthya (potential)” and “sansadhan (natural resources)” but suffered for want of political will and faulty priorities.

Being a land-locked state, Bihar was obviously at a disadvantage when it came to availing petroleum projects. All that is going to change. The gas pipeline and the bottling plants will not only make things easier for the consumers, but also open up lots of employment avenues in the state.

Showering praise on the state for its rich art, culture and cuisine, Modi said, “It would not be an exaggeration to call Bihar a powerhouse of talent. Its people can be found in all IITs and centres of excellence. Bright minds from here are serving in important capacities at the Centre.

“We all are indebted to Bihar. And it is our duty to ensure that Bihar gets a government that ensures that good governance it has seen in the last 15 years continues and realises its full potential,” he said.

Turning his attention to the education sector, the Prime Minister blamed the "indifference" of the past governments for the lack of quality institutions in Bihar which compelled the states youth to move out for pursuing higher learning.

"But now things are changing. The state has many new agriculture, engineering and medical colleges. Under Nitish ji, the state has seen a massive rise in the number of polytechnics besides having its own IITs, IIMs, two central universities and top-class institutions offering courses in law and fashion technology,” Modi added.

He also said central schemes like Start Up India and Mudra Yojana were empowering the states young men and women to set up their own businesses while Kaushal Kendras (skill development centres) were making them employable.

“There are more than 8,000 gas-based projects worth Rs six lakh crore. Many of these are new while others that were shelved have been re-started. These hold out a huge promise for the unemployed youth of Bihar," he noted.

The Prime Minister ended his speech with a reference to the COVID-19 pandemic, and repeated his slogan “jab tak dawaai nahin, tab tak dhilai nahin (no laxity until a cure is found)".

“I salute the people of the country, and Bihar in particular, who did not get bogged down on account of the hardships that the pandemic brought. I congratulate my mothers and sisters whose lives will become much easier because of these gas-based projects,” he added.