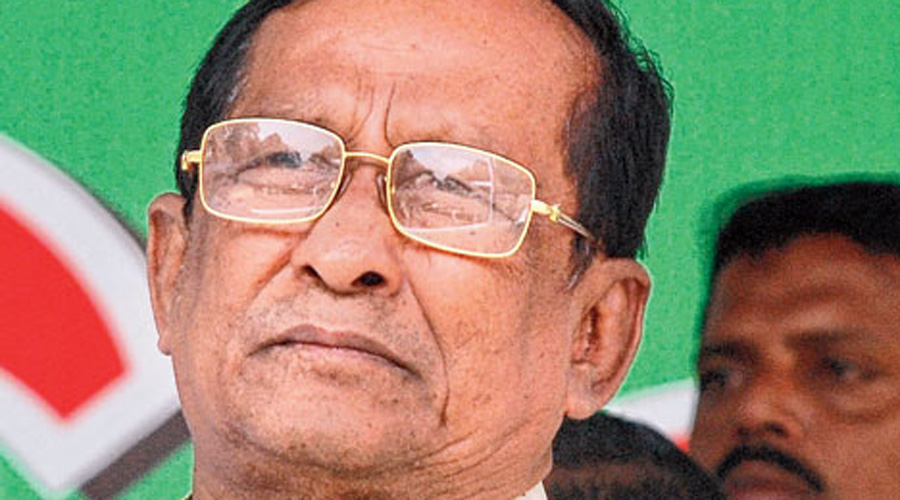 The Opposition legislators created a ruckus in the House after the Speaker refused to entertain an adjournment motion for a discussion on mining and allowed the government to move some bills that were passed in haste amidst the pandemonium. The three MLAs — Bishnu Charan Sethi, Jay Narayan Mishra and Mohan Majhi — will remain suspended for the rest of the budget session.

The action of the MLAs was condemned by government chief whip Pramila Mallick. “BJP MLAs Bishnu Sethi, Jay Narayan Mishra and Mohan Majhi threw shoes, chappals, dustbins and earphones at the Speaker’s podium. This is most unfortunate. Action will definitely be taken in the matter. They are only looking for publicity by indulging in such behaviour. But such attempts will not be successful. People will reject them again,” said Mallick.

The BJP lawmakers on the other hand admitted to having seen shoes, earphones and papers being hurled at the Speaker’s podium but they said they had no idea who was responsible for the incident.

The incident took place when the Opposition Congress brought an adjournment motion to discuss corruption in mining activities (mining business determining the politics in Odisha). All hell broke loose when the Speaker refused to admit the motion for discussion. Both the Congress and BJP MLAs accused the Speaker of adopting a partisan attitude. The situation turned ugly when an amendment to the Odisha Lokayukta bill was passed.

The Opposition MLAs trooped into the well of the House and created a ruckus. Suddenly chappals and other articles were thrown at the podium of the Speaker from the Opposition benches.

Senior BJP legislator Sethi told The Telegraph: “We wa­nted a discussion on the issue. But the Speaker refused to entertain the demand. He was not able to reply convincingly to why he had rejected the motion for discussion. When the leader of the Opposition wanted to speak, he was not allo­wed. We condemned the undemocratic attitude of the Sp­e­a­ker. I know that pens, dustbins and chappals have been thro­wn but I don’t know who did this. The decision to susp­end us is an undemocratic one.”

Senior party MLA Mishra told this newspaper: “The Speaker has been indulging in undemocratic practices. The leader of the Opposition was not allowed to speak. This is not way the Assembly should be run. Rules have been cast to the wind. We were not given an opportunity to put forth our points.”

Congress legislature party leader Narasingha Mishra said: “Whatever happened in the Assembly today was unfortunate. It is against the democratic norms and practices. I am condemning it. The Congress had brought the motion. Without any reasons, it was rejected. The Congress protested. As per the democratic norms, when the House was not in order, no bill should be have been put up for discussion. The government passed some bills in a hurry. I also condemned it.”

Before taking action against the MLAs, Speaker Patro had called for the video footage of the entire incident. Sources revealed that after examining the footage, he decided to suspend the MLAs.

Protesting against the decision, the BJP legislators walked out and staged a dharna near the Mahatma Gandhi statue inside the Assembly.

Sources said the ongoing budget session of the Assembly may end on Saturday night.