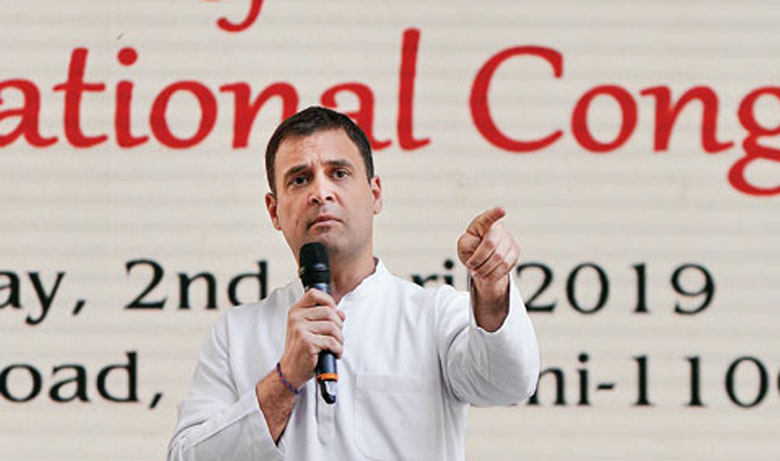 The Congress has gone the whole hog in reinforcing the concept of a welfare state and promised radical reforms to restore institutional autonomy and individual freedoms in its manifesto for the general election.

The minimum income guarantee scheme, named NYAY to create an impression of ensuring justice for the poor, is doubtless the engine of the welfare vision plan. The other drivers are farm loan waiver for the entire country, free education in public schools till Class XII and the right to health care.

It also promises the highest priority to creation of jobs and the extension of the MGNREGA, the rural job guarantee scheme, from 100 to 150 days if the party comes to power.

While the plans drew questions on how they will be funded, the Congress used the occasion to try and set aside speculation on the party’s position on economic reforms.

The Congress’s “economic philosophy is based on embracing the idea of an open and liberal market economy, creation of wealth, sustainable development, reduction of inequalities and assurance of welfare of all sections of the people”, the manifesto said.

It added: “Our economy is still over-regulated. Structural problems remain. Government control and bureaucratic interference are aplenty. Regulators have morphed into controllers. There is growing interference by the courts in economic policies. The BJP government has reversed the clock of reforms. The Congress promises to undo these distortions and restore an open, liberal market economy.”

The Congress promised to scrap the outdated and widely misused sedition law, evoking a vicious reaction from the government.

The party expressed commitment to removing Section 499 of the Indian Penal Code to make defamation a civil offence.

Non-payment of loan dues by farmers will also be made a civil offence. “Debt is a civil liability and we will not allow criminal proceedings to be instituted against a farmer who is unable to pay his debt,” the manifesto said.

A separate kisan budget has been mooted with the objective of facilitating targeted policies and expenditure on agriculture. A National Commission on Agriculture Development and Planning, consisting of farmers, agriculture scientists and economists, will be set up to advise the government on making farming viable and remunerative. The crop insurance companies will be restructured to create a no-profit-no-loss scheme.

Other big promises include scrapping the electoral bond scheme as it is designed to help the ruling party, the matching of EVM vote count with at least 50 per cent of VVPAT slips, 33 per cent reservation for women in government jobs, a separate investigating agency for crimes against women, a law against hate crimes and lynching, setting up of a court of appeal between high courts and the Supreme Court and a probe into controversial deals like that on Rafale.

The manifesto sprang several innovative ideas: a social accountability act to ensure that all government schemes and programmes are subjected to social audit, an inter-faith council to promote tolerance and harmony and a law against excessive governmental surveillance and monitoring. It also talks of a diversity index as a metric to assess and ensure diversity in all government bodies, semi-government agencies, public sector enterprises and other public bodies.

An anti-discrimination law to prohibit bias on the basis of religion, caste, gender or language in the supply of goods and services such as housing, hostels, hotels and clubs has been promised.

These clusters of law have been envisaged in the aftermath of several complaints of discrimination on the ground of religion over the past five years. The Congress had promised to pass the Communal Harmony Bill in 2004 but could not do so for the 10 years the UPA was in power.

Although the manifesto promises dignity and autonomy to institutions by making them accountable to Parliament, no roadmap has been given for this onerous task.

In order to curb political defections, the manifesto says: “The anti-defection law will be amended to provide for instant disqualification of an MP or an MLA for proven disobedience to the party whip or for supporting any other party. A disqualified member, including ministers, shall not be eligible to hold any public office or be a candidate in an election for two years.” The Congress has been a victim of large-scale defections in many states ever since the Modi government came to power.

The party promised a new law on doing business, a reformed GST, the withdrawal of the angel tax on start-ups, in addition to scrapping the need for permission for starting business for three years.

Modi’s “Make in India” will be replaced by Make for the World under which Indian companies will be invited to invest in exclusive export-only zones without any indirect tax and low corporate tax.

On foreign policy, the manifesto offers a new national council and a sustained dialogue with the people in Jammu and Kashmir. On Pakistan, the manifesto mentions sustained international pressure and a firm security strategy on the borders.

Nyay scheme: What the Congress has said in its manifesto