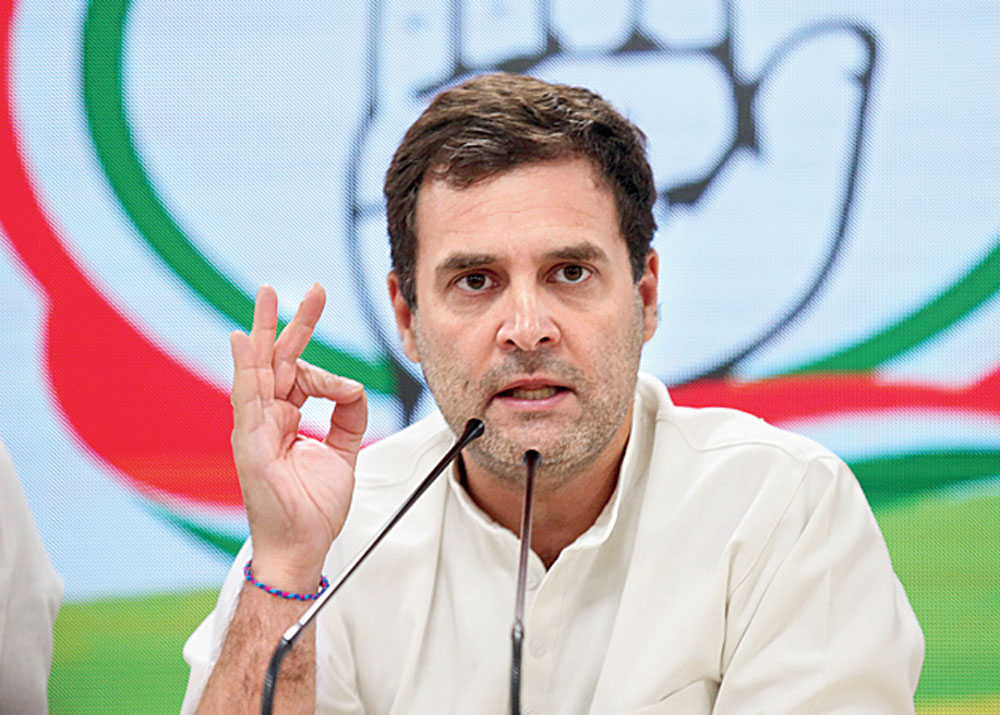 Even the poorest Indian family will have at least Rs 12,000 a month to sustain itself under the Congress’s promised minimum income guarantee scheme, Rahul Gandhi said on Monday as he unveiled the contours of his party’s “final assault on poverty”.

He said five crore families, accounting for 25 crore people or about 20 per cent of the population, earn less than Rs 12,000 a month. The scheme will make up the shortfall by giving these families the balance.

“Five crore of the poorest families in India will receive Rs 72,000 per year,” the Congress president tweeted. It wasn’t clear if he was referring to an average figure.

Rahul seemed thrilled to be able to announce the “historic scheme that has no match in the world”, repeatedly asking reporters if they were astounded by the baseline of Rs 12,000 a month.

He insisted that the scheme — to be implemented in phases after a pilot project — was “fiscally prudent” and “doable” and had been devised after consultations with economists worldwide.

Going by an average annual dole of Rs 72,000 per target family, the scheme will cost the exchequer Rs 3.6 lakh crore a year, making it the second-biggest expenditure head after the payment of interest on government debt.

“Today is a historic day…. It is on this day that the Congress party launched its final assault on poverty,” Rahul tweeted. “#NyayForIndia is our dream & our pledge.”

“Nyay” is an acronym for Nyuntam Aay Yojana (Minimum Income Plan), but the word also means “justice” in Hindi and some other Indian languages, lending itself to a powerful poll slogan.

“The people, especially the poor, had to suffer a lot in the last five years. The Congress has now decided to give nyay to them,” Rahul told the media after a Congress Working Committee meeting cleared the party’s manifesto and campaign strategy.

“The baseline will be Rs 12,000 per month for every family, that’s the minimum every family should get (overall)…. Cutting across caste, religion, language, every (poor) family will get Rs 72,000 directly in their account every year. There will be a pilot project before implementation.”

Rahul strove to allay any doubts about resources and fiscal prudence. “The entire calculations have been done. The fiscal repercussions have been analysed. This money is available. This scheme is perfectly doable,” he said.

“We have been working on this for over six months; many economists of the world have been consulted and they all believe this can be done.”

“Modi gives… Rs 3.5 lakh crore to those who own private jets. Our scheme will benefit 25 crore people, not 15-20 businessmen.”

To questions about the project’s feasibility, he said: “We have carefully examined it; checked it again and again. We have worked out the entire road map. We implemented the Mahatma Gandhi National Rural Employment Guarantee Act; this is going to be the second and final stage of our poverty alleviation programme….”