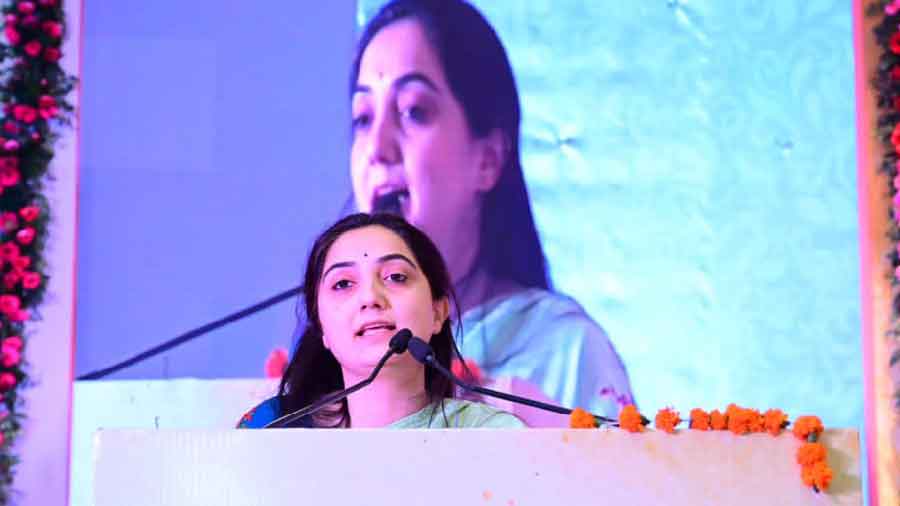 The Supreme Court is scheduled to hear on Tuesday the fresh plea of former BJP spokesperson Nupur Sharma seeking revival of her withdrawn petition seeking clubbing of FIRs lodged in several states over her remarks on Prophet in a TV debate show.

Sharma has also sought expunction of adverse remarks made by a vacation bench of Justices Surya Kant and JB Pardiwala on July 1 while refusing to entertain her plea for clubbing of the FIRs lodged.

As per the details uploaded on the apex court's website, the same bench is scheduled to hear a fresh miscellaneous application of Sharma on Tuesday.

The Writ Petition above mentioned was dismissed as withdrawn by this Hon'ble Court vide order dated July 1, 2022. ... It is submitted that Ms. Rachitta Rai, Advocate for the Petitioner has on July 9, e-filed an application for clarification of the Order... and for issuance of appropriate directions along with the application for exemption from filing the notarized affidavit, the office report uploaded on the apex court website said.

The Miscellaneous Application along with applications above mentioned is listed before the court along with this Office Report.., it said.

The top court had come down heavily on her for her controversial comments against the Prophet, saying her "loose tongue" has "set the entire country on fire" and that she is "single-handedly responsible for what is happening in the country".

"She actually has a loose tongue and has made all kinds of irresponsible statements on TV and set the entire country on fire. Yet, she claims to be a lawyer of 10 years standing... She should have immediately apologised for her comments to the whole country," the court had said.

Sharma has made the Ministry of Home Affairs, Delhi, Maharashtra, Telangana, West Bengal, Karnataka, Uttar Pradesh, Jammu and Kashmir and Assam as parties in her petition.

Refusing to entertain Sharma's plea for clubbing of FIRs lodged in various States against her for the remark, the bench had held that the comment was made either for cheap publicity, political agenda, or some nefarious activities.

Sharma's remark on the Prophet during a TV debate had triggered protests across the country and drew sharp reactions from many Gulf countries. The BJP subsequently suspended her from the party.

"These remarks are very disturbing and smack of arrogance. What is her business to make such remarks? These remarks have led to unfortunate incidents in the country...These people are not religious. They do not have respect for other religions. These remarks were made for cheap publicity or political agenda or some other nefarious activities", the bench had said.

While refusing to entertain Sharma's plea for clubbing of FIRs, the bench had allowed her to withdraw the plea.

"She has a threat or she has become a security threat? The way she has ignited emotions across the country this lady is single-handedly responsible for what is happening in the country," the bench had said when Sharma's lawyer Maninder Singh had pointed out that she was facing threats to life.

The court's observations against the suspended BJP leader had come in the backdrop of the brutal murder of a tailor in Udaipur by two men, who had posted videos online, claiming that they were avenging an insult to Islam.

Referring to various apex court verdicts, Singh had said there cannot be a second FIR on the same cause of action.

Singh referred to the Arnab Goswami case of 2020 and TT Antony case of 2001 and said the law has been laid down by the apex court that multiple FIR on the same configuration can be clubbed and there can be no second FIR on the same cause.

After the hearing which had lasted for nearly 30 minutes, the bench had said it is not convinced with her bonafide and the conscience of the court is not satisfied and refused to entertain the petition saying "you avail other remedies."