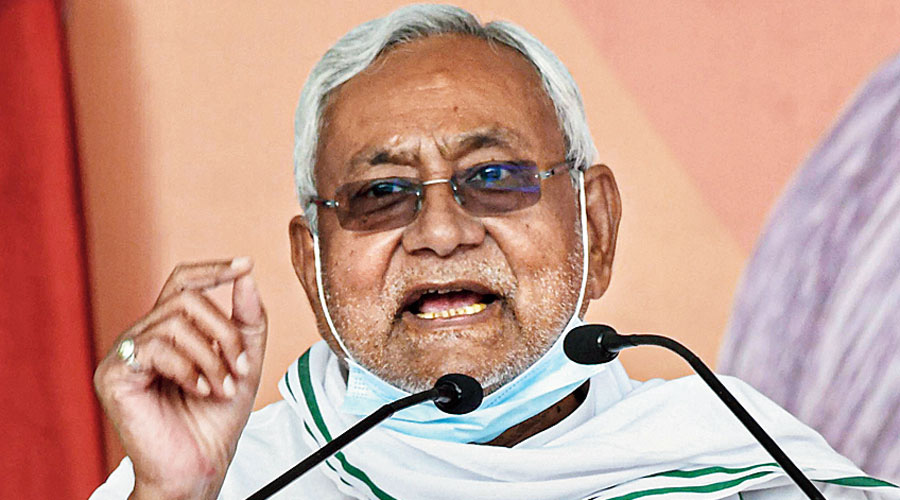 Senior Congress leader Digvijay Singh on Thursday accused Bihar Chief Minister Nitish Kumar of being a "puppet" in the hands of Prime Minister Narendra Modi and the BJP.

He also claimed that the saffron party-led government at the Centre is selling assets created by the Congress in the name of National Monetisation Pipeline.

"Nitish Kumar has transformed himself into the RSS-BJP mould. He is just a puppet CM in the hands of the PM and the BJP. He cannot be a PM material at all, Singh told reporters here.

Kumar's party, the Janata Dal (United) which is an ally of the BJP at the Centre as well as in the state, recently said he is not in the race for the post of the prime minister though he has all the qualities required to become one. The CM, however, disapproved of the statement.

Singh claimed that Kumar is working under tremendous pressure of the BJP and that is why chapters on freedom fighter and socialist leader Jai Prakash Narayan have been omitted from the post-graduate syllabus of a university named after him in the state.

Chapters on another socialist leader Ram Manohar Lohia has also been removed from the political science syllabus in Jai Prakash University at Chhapra in Saran district, he said.

Kumar and RJD supremo Lalu Prasad were followers of Narayan.

Prasad has slammed the Nitish Kumar government for removing the two leaders from the PG syllabus of JP University.

Thirty years back I had established JP University in the name of Jayaprakash Narayan in my karmbhoomi. Now, in the same university, this sanghi government and officials toeing its agenda are removing the ideology of JP-Lohia from the syllabus. This cannot be tolerated. Government should immediately take note, Prasad tweeted on Wednesday.

The students of the university have also protested the change in the syllabus.

Criticising the National Monetisation Pipeline (NMP) of the Centre, Singh said, It's a dangerous bid by the bankrupt Narendra Modi government to raise money by gradually handing over sectors like rail, road, airport and mining to corporates. It's an anti-people move. Why Nitish Kumar is maintaining a stoic silence over the issue?

He said the BJP often claims that nothing has happened in the country in the last 70 years, the majority period of which was ruled by the Congress.

If nothing has happened in the last 70 years, what the central government is selling? That is the difference between worthy and unworthy sons, between the Congress and the BJP, Singh said.

Finance Minister Nirmala Sitharaman last month announced the Rs 6 lakh crore NMP that will look to unlock value in infrastructure assets across sectors ranging from power to road and railways.

To a question on Nitish Kumar's demand for caste-based census in the country, Singh said the Congress is in favour of it.

"But, I am sure the PM and the BJP will not accept the demand for it. Both the PM and Nitish Kumar are misleading people over the issue, he said.

Statistics about different castes will help in formulating development schemes effectively as many of them have not benefitted so far in line with their actual population, the Bihar CM has said.

The BJP leadership has so far not taken a categorical stand on the issue which has been lapped up by a number of regional parties, many of them its rivals in different states.

There is a view that a caste census will bring the Mandal politics to the centre stage of politics and can be an effective weapon in the hands of regional parties to counter the BJP's Hindutva and welfare planks, the twin issues used by the saffron party to make inroads into the OBC vote bank at the expense of state-based parties.