The Bihar Police is now 1.08 lakh strong and women personnel comprise 24.3 per cent of it 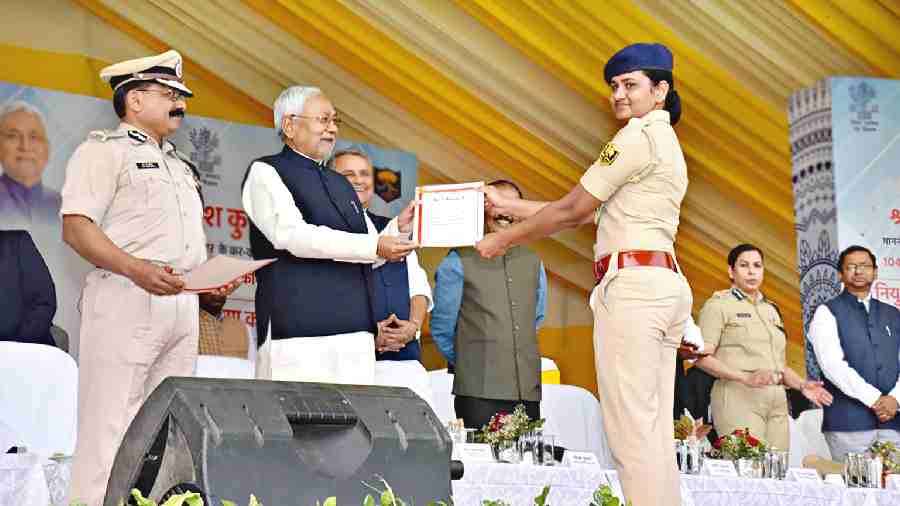 Bihar chief minister Nitish Kumar distributed appointment letters to 10,459 police officials, including 3,852 women on Wednesday, catapulting Bihar to the top among the states with the highest percentage of women in their police forces.

The Bihar Police is now 1.08 lakh strong and women personnel comprise 24.3 per cent of it.

“I am not satisfied with this achievement. We have given 35 per cent reservations to women in government jobs, but they are just touching 25 per cent in the police force. We need to raise it further,” Nitish said while addressing the newly appointed police personnel at a function at the Gandhi Maidan in Patna.

Nitish stressed on the massive change in the Bihar Police since he took over as the chief minister in 2005. The force was just 42,500 strong and the state ranked among the lowest in police–population ratio.

“We decided to take the strength of the police force to 1.52 lakh to achieve the national average of 115 police personnel per lakh population. The force is now 1.08 lakh strong, but we are still 44,000 short. We need to expedite the recruitment process,” Nitish said.

The chief minister also underlined the importance of patrolling by the police and said that it should be done day and night. He added that the government has already provided two vehicles to each police station in the state and will provide one more if needed.

Tejashwi said that the Grand Alliance government was working to fulfil its commitment to provide 10 lakh jobs to the people. He told the newly appointed police personnel to “stay alert about those who are trying to sow poisonous seeds in the society and trying to destroy harmony. You must deal firmly with them.”

The chief minister exhorted them to adhere to prohibition and help enforce it. Bihar imposed a total ban on liquor manufacturing, trade and consumption in April 2016.

However, the move boomeranged with the state government running up revenue losses worth thousands of crores, huge job loss, and the mafia developing a nexus with the enforcement agencies and politicians to make alcoholic drinks available in every nook and corner of the state.

The focus of the police force has been on prohibition and it has been an important reason behind rising lawlessness, increasing crime and deteriorating law and order situation in Bihar.