JDU leader hands over his resignation letter to Bihar governor Phagu Chauhan, only to be called to take oath afresh as CM at 2pm the following day 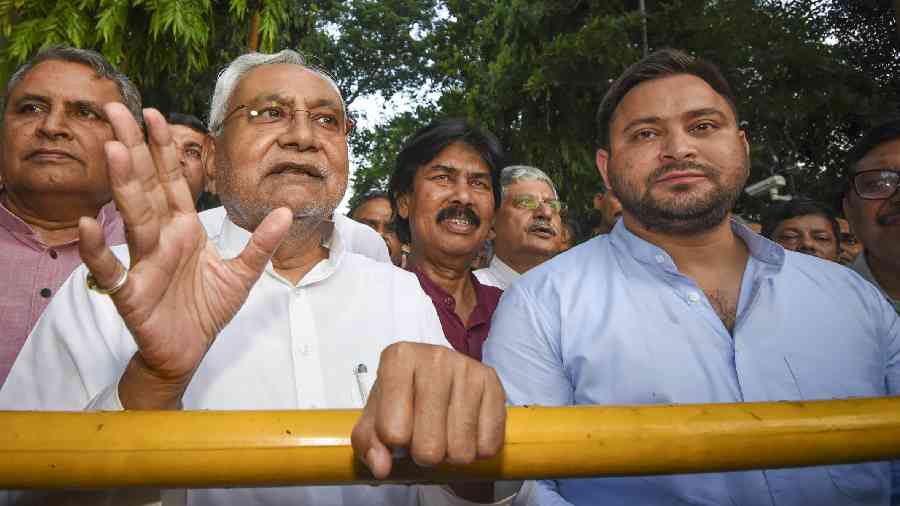 That a day, not a week, is a long time in politics was proved again with Nitish pulling the plug on the NDA government in the state and shaking hands with the RJD-led Grand Alliance.

The Janata Dal United leader handed over his resignation letter to Bihar governor Phagu Chauhan on Tuesday, only to be called to take oath afresh as chief minister at 2pm the following day.

Nitish told reporters that he “did not like the way attempts were being made to create communal disputes in society”.

He also emphasised that he and his allies will “work in other states” against such attempts, which was interpreted by some as a signal of his national ambitions after the 2024 general election.

“All the MPs, MLAs and leaders of our party wanted that we should leave the NDA. I accepted their wish and resigned from the position of chief minister,” Nitish said after meeting the governor.

“There were many issues, our people will tell you,” he said in response to a question on the key differences with the BJP.

After his latest somersault and living up to the moniker of “Paltu Ram (turncoat)”, the JDU leader went to meet Rabri Devi, former chief minister and Lalu Prasad’s wife, at her 10 Circular Road residence.

Her son and RJD leader Tejashwi Prasad Yadav had called a meeting of the Grand Alliance there and Nitish was elected the leader of the alliance.

Nitish expressed regret at bringing down the Grand Alliance government in 2017 and appealed to everybody to “forget the things of the past and march forward together to take Bihar ahead”.

The JDU leader and Tejashwi then walked to the chief minister’s 1 Aney Marg residence to discuss the details of sharing power in the new government. Both leaders later met the governor and handed over the letter of support of 164 MLAs in the 243-member Assembly.

“Altogether 164 MLAs belonging to seven parties have expressed their support for us. There is an independent MLA also among them. The governor will now decide the future course of action. We will work together to take Bihar forward,” Nitish said before the Raj Bhavan invited him to take the oath on Wednesday.

The BJP cried foul, declaring with a straight face that it was a betrayal of the people’s mandate in the 2020 Assembly elections.

“Whatever happened today is a betrayal of the people and their mandate for peace and development in the state. The public will not tolerate this,” Bihar BJP president Sanjay Jaiswal said.

“Our party had won 74 seats in the 2020 polls but we kept the promises made by Prime Minister Narendra Modi and Union home minister Amit Shah to make him (Nitish) chief minister. He had parted ways with the RJD in 2017 over the issue of corruption. He should say what change has happened since then,” Jaiswal added.

The dramatic turn of events on Tuesday was a culmination of the ever-increasing bitterness between the JDU and the BJP, which started in the aftermath of the 2020 Assembly elections. The JDU could win only 43 seats (later the tally inched up to 45 when two MLAs joined from two other parties) out of the 115 it contested and finished third with the RJD (79) emerging as the topper and the BJP as the runner-up (74 that went up to 77).

The JDU had accused the BJP of encouraging then Lok Janshakti Party (LJP) chief Chirag Paswan to field candidates in almost all the seats Nitish’s party contested. The tactic led to a division of the NDA votes and resulted in the loss of several seats.

The fissures kept widening over issues related to governance, and took a serious turn recently as the JDU accused the BJP of trying to use former Union minister R.C.P. Singh to break the party.

The two parties have also differed with each other — at least in public — on several controversial issues like the National Register of Citizens (NRC), National Population Register (NPR), uniform civil code, population control policy, namaz at public places, wearing hijab in government educational institutions, loudspeakers atop religious places, the Pegasus spyware scandal and caste census, among others.

“Nitish had worked with the old guard of the BJP and had been comfortable with it. He had a close rapport with Arun Jaitley. In Bihar, Sushil Kumar Modi was the bridge between the JDU and the BJP. But with the old guard gone and a distinct ruthlessness being shown by the current crop of BJP leaders, he was becoming more uncomfortable every passing day,” a senior JDU leader told this newspaper.

Tejashwi lauded Nitish’s move by saying that it was in the interest of the country, the Constitution, communal harmony and peace.

“An atmosphere of communalism has been created in the country. There are attacks on the ideal of social justice. China has entered our country and established villages within our borders, yet nothing is being done to stop it. Today our nation wants an option,” Tejashwi said.

The RJD leader downplayed the previous differences with Nitish. “We are uncle and nephew. We all are socialists. Any differences between us are like a fight between brothers in a family. It will not mean that we stop being socialists,” he said.

Earlier, the JDU and the RJD had held separate meetings of their legislators. The RJD meeting turned into a meeting of the Grand Alliance with the Congress, CPI-ML, CPI and the CPM joining in. Former chief minister Jitan Ram Manjhi’s Hindustani Awam Morcha Secular (HAMS) supported the JDU.

Bihar Congress leader and All India Congress Committee secretary Shakeel Ahmad Khan, who was present at the Grand Alliance meeting, said: “The beginning of the defeat of the BJP in the 2024 general election has started from Bihar. This is going to be a collective effort and other states will also join it.”